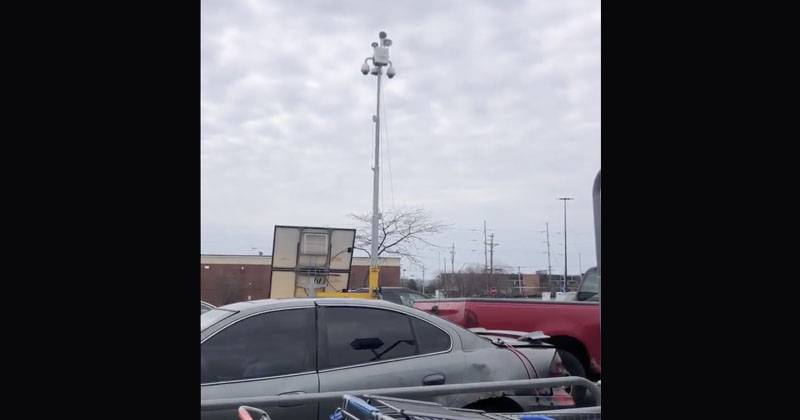 Footage from a Walmart parking lot shows a surveillance tower fitted with speakers encouraging shoppers to follow the CDC guidelines and to observe social distancing.In something out of 1984, a monotone male voice blares from the tower telling shoppers to wash their hands and remember to keep distance away from others.“Please remember to wash your hands often, stay home if you are sick, and practice good social separation of at least 6 feet when possible,” the voice says.

This speaker is in a Walmart parking lot 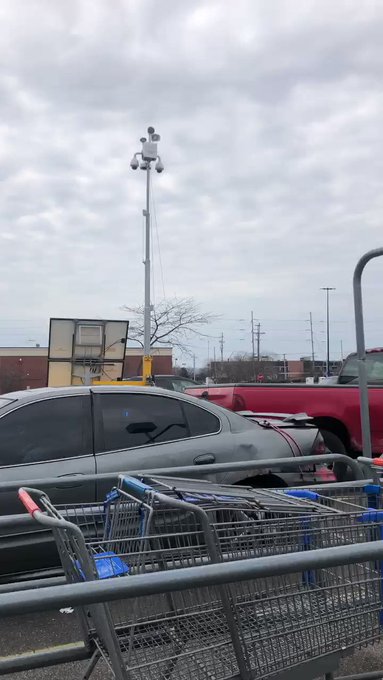 “Loitering inside or outside of the store is strictly prohibited. Thank you for choosing Walmart.”

The social engineering practices emerging from the coronavirus outbreak is becoming ridiculous and gravely concerning.

For example, a paddle boarder was arrested in California for flouting the coronavirus closure orders – despite the fact he was the only man in the water with no people anywhere around him.

And a woman was arrested in New York for failing to observe social distancing rules — and spent the next 36 hours packed in a cell with two dozen other women.

These lockdown rules are more about the exercise of power than about keeping the American people safe.

This American was forced to take a COVID Test – medical Martial Law is here.

Amazon (NASDAQ:AMZN) will issue a written warning to warehouse workers violating social distancing rules, according to a document viewed by CNBC.

The second violation could result in the employee being fired.

Amazon confirms to CNBC that those who “intentionally violate” the rule could be terminated.

Last week, Amazon workers in Staten Island and near Detroit went on strike due to safety concerns after positive coronavirus cases at the sites.

PHOTO: Changes to supermarket shopping are about to come into effect as a result of the coronavirus pandemic. (Antonette Collins)
RELATED STORY: What is social distancing and who needs to do it?

Easter shopping hasn’t looked like this before. As coronavirus restrictions get tighter, supermarkets are adding more rules to your grocery shop.

And retailers are preparing for what’s traditionally the second busiest shopping time outside Christmas. Rather than the usual crammed aisles, stores are starting to limit shoppers and asking people to queue outside the store.

Here’s what we know about the rules so far.

An all-in announcement from the major food retailers (including Coles, Woolworths and Aldi) yesterday flagged they could start to limit the number of people in stores.

And it’s not just supermarkets. Other stores were already rolling out queuing systems over the weekend — this Bunnings store in Brisbane’s south-west suburb of Oxley had a line-up by Sunday lunchtime.

PHOTO: It’s not just supermarkets asking customers to queue when needed. This line was outside a Brisbane Bunnings on Sunday. (Supplied: Inga Williams )

But there are no hard and fast rules on whether your local store will be asking you to queue.

How will queuing work?

At Woolworths, limiting the number of people will depend on how busy the store is. And some stores might not even need to use it at all.

The company’s supermarket managing director Claire Peters said it’ll be specific to each store and based on its size.

She said store managers will use “common sense discretion” to manage this.

Coronavirus update: Follow the latest news in our daily wrap.

If you have to queue, Woolworths will mark out the area with cones and operate a one-in, one-out system.

And to keep people a healthy social distance of 1.5 metres apart, the stores will work with centre managers, security and police to manage queues.

At Aldi stores, the number of people allowed inside at one time varies from 70 to 100 customers.

Again, that depends on how big the shop is.

Security officers or staff will tell shoppers if the store has hit capacity and they need to queue (1.5 metres apart, of course) outside.

The budget supermarket chain started rolling out its queues last week if stores were busy.

Just how many people are allowed in Coles and Woolworths stores (which sometimes have more floorspace than an Aldi) will depend.

For example, this Coles store in Perth’s Victoria Park has a limit of 275 people at one time, according to a social media post by centre management.