Following the disappointing late Friday publication of a pivotal study by the New England Journal of Medicine, according to which Gilead’s Remdeisivir presented no marked benefit for those Coronavirus patients who were healthier and didn’t need oxygen or those who were sicker, requiring a ventilator or a heart-lung bypass machine, and that the only statistically significant improvement was observed in patients on supplemental oxygen, while also concluding that “given high mortality despite the use of remdesivir, it is clear that treatment with an antiviral drug alone is not likely to be sufficient”, overnight there was more bad news, this time from the world of potential coronavirus vaccines, after the Telegraph reported that the Oxford University team in charge of developing a vaccine said a recent decline in the infection rate will make it increasingly difficult to prove whether it’s been successful.

“It’s a race against the virus disappearing, and against time,” Professor Adrian Hill, director of the university’s Jenner Institute, told the newspaper. “We said earlier in the year that there was an 80% chance of developing an effective vaccine by September. But at the moment, there’s a 50% chance that we get no result at all.”

Citing a similar challenge to that which crippled the Remdesivir China trial, Hill said he expects fewer than 50 of the 10,000 people who have volunteered to test the vaccine trial in coming week to catch the virus. If fewer than 20 test positive, the results may be useless, he said. Reuters separately reported that the Oxford University team may join Moderna in a large-scale testing program in July.

The disappointing update comes after Oxford’s trial partner, pharma giant AstraZeneca announced a $1.2 billion deal with the US government to produce 400 million doses of the unproven coronavirus vaccine first produced in Prof Hill’s Oxford lab.Meanwhile, the British Government has agreed to pay for up to 100 million doses, adding that 30 million may be ready for UK citizens by September

The graphic below shows what the most recent expectations from the Oxford vaccine were, with management expecting to have the capacity to produce up to 100 million doses by the end of 2020. That timeline now appears optimistic. 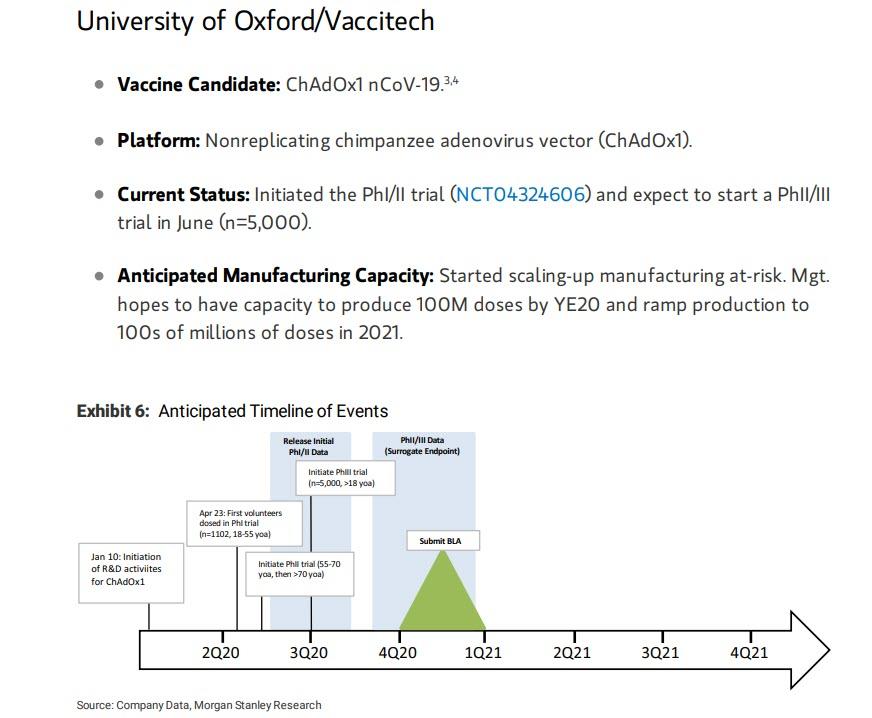 The British government has agreed to pay for as many as 100 million doses, adding that 30 million may be ready by September. The daily rate of new infections has fallen by almost two thirds since hitting a peak of almost 9,000 on April 10.

While developers globally are working on as many as 100 experimental vaccines for Covid-19, the process will take time.

Earlier this month, Dr. Michael Ryan, executive of director of the World Health Organization’s Emergency Program, said that finding a vaccine and distributing it globally will be a “massive moonshot” adding that there’s a chance the disease may be here to stay.

Meanwhile, with Bloomberg reporting that “Fate of Global Economy Rests More Than Ever on Finding Vaccine“, Morgan Stanley has highlighted six vaccines with the highest probability of success and the ability to manufacture at scale, adding that it believes that “millions of doses could be available by fall 2020, assuming no delays and >1B doses in 2021.” Alas, as the Oxford case just demonstrated, delays are now inevitable, and ironically the one thing that can reinstate the previously lofty schedule is if there is a second wave that provides the trial with the number of sick patients needed to bring the trials to their conclusion.

That said, here are some more details from Morgan Stanley’s Matthew Harrison:

We believe 6 (4 of the current clinical candidates and 2 preclinical) have both a reasonable likelihood of clinical success and can be manufactured at scale to be relevant. We see three waves of potential vaccines available commercially, with those from Moderna, Pfizer/BioNTech, AstraZeneca/University of Oxford and CanSino likely in the first wave before the end of 2020. We expect vaccines from J&J in 1H21 and Sanofi/GSK in 2H21. 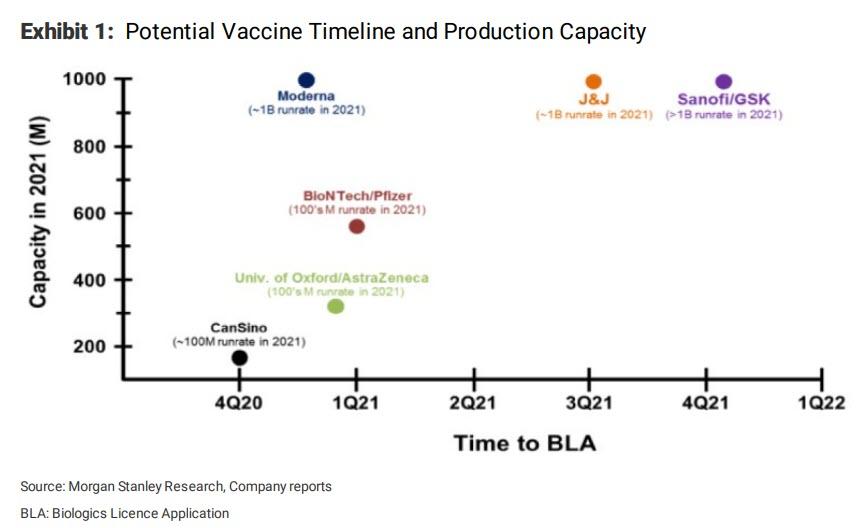 We expect significant production available by mid-2021 with limited quantities as early as fall 2020:

In the near-term we expect to learn if the earliest-to-clinic vaccines produce antibodies against the virus in humans. CanSino has a 508 patient Ph II study which is expected to have data in May (how and when it is released remains unclear), while we expect the US NIAID to provide data from Moderna’s Ph I study in the next 1-2 months. These data will provide initial information about potential efficacy, but will not provide enough information about safety. We would expect to have a clearer picture from Moderna, AstraZeneca and potentially Pfizer on safety by fall 2020. While these companies may be granted emergency use authorizations (EUAs) in the fall of 2020, we would not expect a BLA filing until YE20. Based on current company commentary, we believe millions of doses of the vaccine could be available in the fall, 10-30M/month by YE20 and 100s of millions per month by mid-2021.

How do the current manufacturing projections compare with project warp speed?

The Trump administration has indicated that it plans to have enough doses of vaccine for the entire US population by the end of 2020. Based on current projections from the leading candidates that could be available to the US population, those manufacturers are unlikely to reach a few hundred million doses in aggregate until 1H21. Thus, while it may be possible to accelerate that effort, we believe resources will need to be devoted immediately to potentially achieve such a goal.

We believe the pandemic market could be $10-30B, while the endemic opportunity could be ~$2-25B: