By JOE MIDDLETON FOR MAILONLINE

British Airways are set to lay off thousands of cabin crew and then re-hire them on half pay as part of a huge restructure, a letter to staff has revealed.

IAG chief executive Willie Walsh confirmed last week that a consultation on 12,000 job cuts will still go ahead despite the Government extending its furlough scheme until the end of October.

He said the airline will ‘not pause our consultations or put our plans on hold.’

In a letter sent to staff just two weeks ago, BA gave staff new terms and conditions due to the coronavirus crisis which has severely damaged the aviation industry. 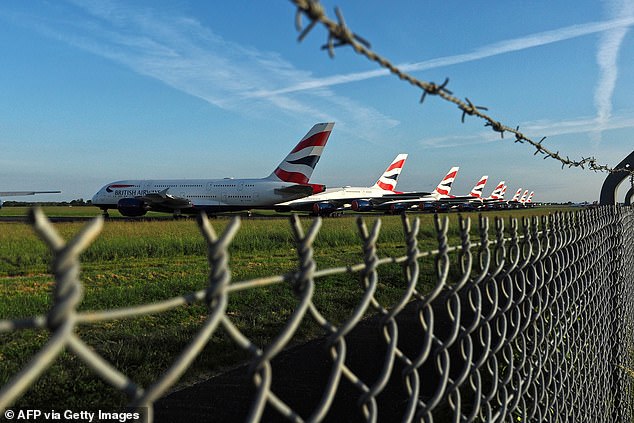 British Airways Airbus A380 aircrafts are parked at the Chateauroux-Deols ‘Marcel Dassault’ Airport (CHR) on May 22, 2020 in France

It was reported by the Daily Mirror that staff are also being sent redundancy notices that end on June 15.

BA is reportedly intending to combine all their cabin crew into one group at a lower rate of pay.

At the moment they are separated into short haul, long haul and mixed.

A senior long haul flight attendant based at Heathrow will see enormous cuts in pay of between 50 per cent and 75 per cent.

One BA employee on Facebook said: ‘On 15th June, I will be made redundant from the job I love after 34 years of loyal service. Redundancy notices are to be issued to 43,000 of my colleagues: the entire workforce. Yep! THE ENTIRE WORKFORCE! 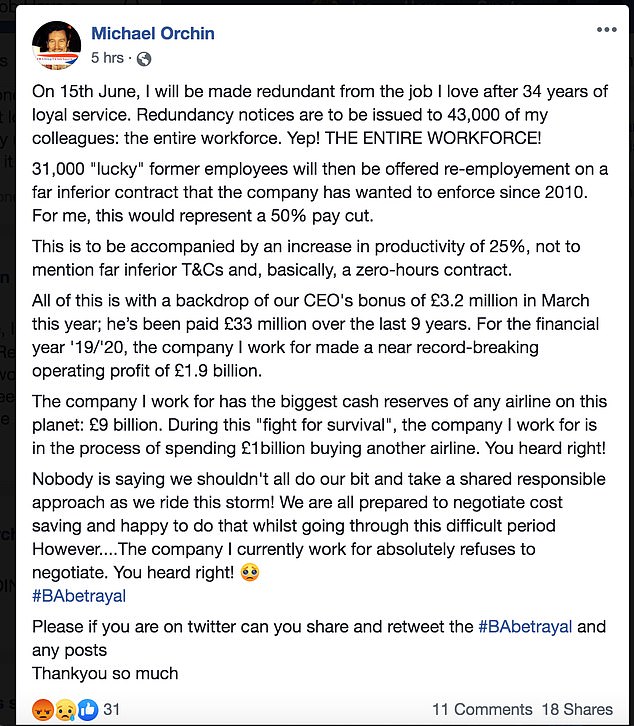 BA and Ryanair amongst airlines struggling during pandemic

‘31,000 ‘lucky’ former employees will then be offered re-employment on a far inferior contract that the company has wanted to enforce since 2010. For me, this would represent a 50% pay cut.

‘This is to be accompanied by an increase in productivity of 25%, not to mention far inferior T&Cs and, basically, a zero-hours contract.

‘All of this is with a backdrop of our CEO’s bonus of £3.2 million in March this year; he’s been paid £33 million over the last 9 years. For the financial year ’19/’20, the company I work for made a near record-breaking operating profit of £1.9 billion.’

BA told The Mirror: ‘We are acting now to protect as many jobs possible. The airline industry is facing the deepest structural change in its history, as well as facing a severely weakened global economy.

How coronavirus has affected UK airlines

Flybe: Europe’s largest regional airline collapsed on March 5 after months on the brink, triggering 2,400 job losses and left around 15,000 passengers stranded across the UK and Europe.

British Airways: The International Airlines Group, which also includes Iberia and Aer Lingus, said on March 16 that there would be a 75 per cent reduction in passenger capacity for two months, with boss Willie Walsh admitting there was ‘no guarantee that many European airlines would survive’. The company has since said it wants to reduce the number of staff by 12,000.

easyJet: The airline with 9,000 UK-based staff including 4,000 cabin crew grounded its entire fleet of 344 planes on March 30. The Luton-based carrier said parking all of its planes ‘removes significant cost’ as the aviation industry struggles to cope with a collapse in demand.

Loganair: The Scottish regional airline said on March 30 that it expects to ask the Government for a bailout to cope with the impact of the pandemic.

Jet2: The budget holiday airline has suspended all of its flights departing from Britain until April 30. A number of Jet2 flights turned around mid-air last month while travelling to Spain when a lockdown was announced in the country.

Virgin Atlantic: The airline said on March 16 that it would have reduced its lights by 80 per cent by March 26, and this will go up to 85 per cent by April. It has also urged the Government to offer carriers emergency credit facilities worth up to £7.5billion.

Ryanair: More than 90 per cent of the Irish-based airline’s planes are now grounded, with the rest of the aircraft providing repatriation and rescue flights. Ryanair CEO Michael O’Leary said his airline would be forced to shed 3,000 jobs while seeking pay reductions of up to 20 per cent by those who remain. But Ryanair has since said it plans to operate 1,000 flights a day this summer – restoring 40 per cent of its flights from July 1, despite indefinite travel restrictions.

‘We are committed to consulting openly with our unions and our people as we prepare for a new future.’

He added: ‘No other employer has threatened to effectively ‘fire and rehire’ its entire workforce. Meanwhile, BA has paid out billions to shareholders and its taking taxpayers’ money. Over 40,000 loyal BA staff now face the prospect of losing either their livelihoods or potentially being re-interviewed for their own jobs on vastly reduced terms and conditions.

‘If the proposals were about dealing with the Covid crisis why are the company threatening to terminate contracts, including eliminating disciplinary procedures? This will not help the company get through Covid 19. This is nothing more than a cynical act of corporate greed and a betrayal of the BA workforce and Britain.’

Industry figures believe it could take airlines at least three years to return to pre-coronavirus levels, meaning they would not be able to financially support staff while flights remain unfilled.

Others are attempting to preserve cash by offering vouchers to customers, instead of cash, and delaying payments.

It comes after it was revealed last week that Airbus and Tui are set to slash thousands of jobs as planes around the world are grounded.

In a further sign of the damage the coronavirus outbreak is doing to business, aircraft maker Airbus stands ready to axe more than 10,000 staff, possibly within days.

And tour operator Tui warned that up to 8,000 jobs will go at its business following the dramatic collapse in air travel and holiday bookings.

The prospect adds to the misery sweeping travel, aviation and aerospace. Plane maker Boeing is cutting 16,000 jobs while 12,000 staff face the axe at British Airways, 3,000 at Virgin Atlantic and 3,000 at Ryanair.

Warning that the company is ‘bleeding cash at an unprecedented speed’, Airbus chief executive Guillaume Faury recently said ‘we are now in the midst of the gravest crisis the industry has ever known’.

The company has 135,000 staff worldwide including 13,500 in the UK including in Broughton, North Wales, where it makes wings, and at Filton in Bristol where the wings are designed. A final decision on the job cuts has yet to be made.

But Mr Faury believes it could take three to five years for passengers to be as willing to fly as before the crisis – hammering demand for planes.

International travel restrictions have hit bookings, forcing Tui, which also runs cruises and airlines, to furlough or cut the pay of 90 per cent of its staff.

It has already taken a €1.8billion (£1.6billion) German state loan and ditched the dividend after cancelling most holidays in June.

In the UK, output in travel and tourism halved in March, air travel fell 44 per cent, and accommodation by 45.7 per cent, according to the Office for National Statistics.