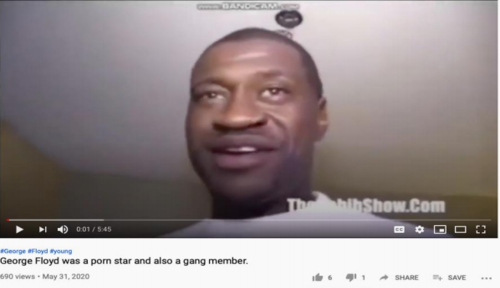 George Floyd’s death at the hands of police over an alleged counterfeit $20 bill has sparked nationwide riots and looting sprees reaching as far as Atlanta.

CNN’s headquarters has been burnt, multiple police officers have been shot and countless police cars have been torched with police stations ransacked.

In Washington DC, rioters attempted to breach the White House and were rebuffed by Secret Service agents.

As much of America burns, our attention is focused not just on the brutal act that caused the death of an unarmed black man.

But we also at the life story of George Floyd and what he left behind, as well as questions  to the motive behind the actions of the police officer who had his knee on his neck.

Derek Chauvin, the officer in question was likely known to Floyd as the two had previously worked together as bouncers at the same club for over a decade.

This was confirmed by Maya Santamaria, who is former owner of El Nuevo Rodeo.

“Chauvin was our off-duty police for almost the entirety of the 17 years that we were open,” Santamaria told KSTP.

“They were working together at the same time, it’s just that Chauvin worked outside and the security guards were inside.”

Santamaria also told the TV station that Chauvin “had a real short fuse,” adding that he often pulled out mace and pepper spray when she thought it was unwarranted.

Could it be that Chauvin was settling a workplace personal vendetta with Floyd? Or could Floyd’s other job have triggered such a vicious reaction?

George Floyd is much talked about as a beloved community member and former athlete, who was outspoken against gang violence.

Fans of the por_n website, TheHabibShow may have found the face of the recently slain Floyd, eerily familiar as there is a much less talked about dimension to Floyd.

We can confirm that George Floyd, the Houston Texas native was, in fact, a por_nstar, performing for the black po_rn site TheHabibShow under the moniker ‘Floyd the landlord’, performing with ebony po_rn talents such as Kimberly Brinks and  Nelli Tiger.

Behind the scenes, clips show Floyd as an affable performer who got along well with his co-stars.

His untimely passing deeply troubled his employers who posted on their official thehabibshow Twitter,

“RIP GEORGE FLOYD. May you have peace and blessing in the other world. Let us have no mercy on them killers.#JusticeForGeorgeFloyd”

They also shared the link to the George Floyd Memorial fund set up by his family, which at the time of writing has raised 3,6 million dollars.

Could it be that the heinous, heartless and unforgivable act by Derek Chauvin was driven by a jealousy and inferiority complex over Floyd’s prowess in his other work?

When we see such inhuman acts , we look into everything to try to understand why.

But can we ever really understand what drives a man to use the power he has to kill someone he may have known for over a decade?

The web page at https://www.youtube.com/embed/Ht9GrfEhyZs might be temporarily down or it may have moved permanently to a new web address.