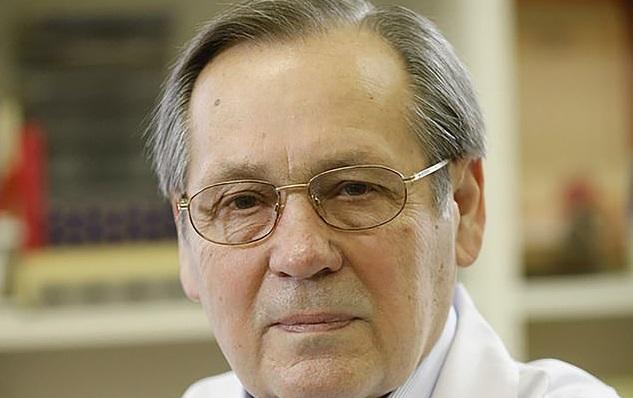 Professor Alexander Chuchalin, who founded the Russian Research Institute of Pulmonology and is the head of the Department of Hospital Therapy at the Pirogov Russian National Research Medical University, reportedly tried and failed to block the treatment over ‘safety’ concerns before he quit the ethics council.

On Tuesday, Russia announced that it had registered the world’s first vaccine for the novel coronavirus following two months of clinical trials – the data from which has not been published.

The two men were the leading academics behind the new ‘world-beating’ vaccine.

Chuchalin allegedly asked them: ‘Have you passed all the necessary paths approved by Russian Federation legislation and the international scientific community? Not!

‘This job has not been done. Thus, one of the ethical principles of medicine has been grossly violated – to do no harm.’

He stressed: ‘I am depressed by the position of some of our scientists who make irresponsible statements about ready-made vaccines.’ – Daily Mail

“In the case of a drug or vaccine, we, as ethical reviewers, would like to understand, first of all, how safe it is for humans,” Chuchalin told journal Nauka i Zhizn (Science and Life) shortly before his resignation.

“Safety always comes first. How to evaluate it? The vaccines that are being created today have never been used in humans, and we cannot predict how a person will tolerate it,” he added.

According to Chuchalin, it’s crucial to know “the effect of the vaccine in the longer term,” adding “the fact is that there are a number of biological substances that do not manifest themselves immediately, but only after a year or two.”

Giving zero f*cks about the vaccine’s safety – or lack thereof, Philippine President Rodrigo Duterte said earlier in the week that he volunteered to participate in trials for the Russian vaccine – however a presidential spokesman reportedly said on Thursday that Duterte would be injected as early as May, 2021, according to CNBC.

According to the report, the Philippines will be one of a handful of countries that will participate in extensive “phase three” vaccine trials, which are reported to begin in October.

Phase three trials are considered by medical experts to be critical for any vaccine development and are needed to root out any potential side effects. Such trials, which typically randomize who gets the vaccine and who doesn’t, can involve thousands of participants.

The Philippines last week overtook Indonesia to report the highest number of cumulative coronavirus cases in Southeast Asia, data compiled by Johns Hopkins University showed. As of Thursday afternoon, the country has reported 143,749 cases and 2,404 deaths, according to Hopkins data. –CNBC

Meanwhile, Vietnam has registered to buy 50-150 million doses of Russia’s vaccine, according to Reuters, citing a report by state television. According to newspaper Tuoi Tre, some of it will be a “donation” from the Kremlin.

Vietnam has reported a total of 929 infections and 21 deaths.