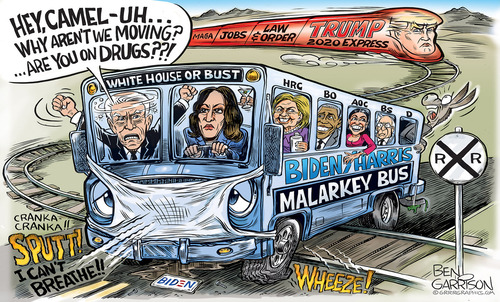 – Their Entire Platform Is: Destroy America By Any Means Necessary

By Dr. Don Boys, Ph.D. for All News Pipeline

Politicians and babies both need to be changed often and for the same reason, and Americans will be attempting to make changes in November. America’s future depends on what change if any, we make at the voting booth. And the results will depend on whether we go to the polls or mail in a ballot. The long-honored absentee ballot is generally safe, but a massive mail-in vote is an engraved invitation for vote corruption.

Often, a politician may indicate a need for a change, but in reality, it’s only a bad odor. Not yet. While it might be premature to change a baby’s diaper impulsively, it might be perilous to do the same for a politician. Hence, the need to not be hasty in the November election.

While there are thousands of hopeful politicians on the ballots, the most vital is the presidential race, but does that position need to be changed?

We have a choice of Donald Trump who has a checkered past bedding various women but who has kept many of his promises he made to us. In that, he is a very unusual politician. For me, this is a replay of 2016—choosing the one who will do less damage, stabilize our economy, keep the baby butchers at bay, return peace to our cities, keep China behind her famous wall—without bankrupting our nation.

His vice-president Mike Pence is a good man. After caving to the LGBTQ tyrants in Indiana pre-election, he has done better than any other politician in standing for family and morality. While he could be more forceful, we all know the LGBTQ crowd specializes in bullying, badgering, and blackmailing decent opponents. He has done a respectable job with the other chores Trump assigned him.

As an Independent, that is the team I will vote for again, understanding that no candidate is perfect. I decided not to run this time.

So if you like stories like this, please consider donating to ANP to help keep us in this ‘Info-war’ for America at a time of systematic censorship and corruption). 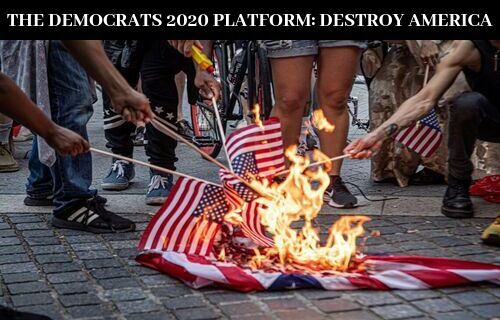 The other ticket is abysmal, and it is difficult to understand how any honest American could put them in office. Joe Biden has a history of plagiarism, lying, very loose hands around girls and women, fanatically desirous of grabbing every gun in America and putting us in debt quadrillions of dollars. Biden is the description of a Throttlebottom—an innocuously inept and futile person in public office.

Biden is pathetic and surely will only get the sympathy vote and maybe his wife’s.

Kamala Harris is his choice for Vice-President, and she has a record that is far, far left. She is the most radical U.S. Senator. She climbed to power in California with the help of her lover Willie Brown, thirty years her senior and Speaker of the House in California. Brown has been separated from his wife since 1976, and Kamala is only one of many women with whom he fornicated. Her appointed job required no credentials, no work, and she was “paid the equivalent of a full-time [state] senator for arriving at a one- to two-hour meeting each month.”

A Republican member of the state assembly at the time said, “Screwing the speaker has its rewards. Stevie Wonder could have seen through that play.” However, whatever hours she has logged in bed, she is far more dangerous to America than Hillary.

Senator Harris went after Judge Kavanaugh relentlessly like a pit bull going after a porterhouse steak. She believed the unsupported, unreal, and unchaste charges because “a woman would never lie about such a thing.” Now that it is to her benefit, she refuses to believe the senate aide’s accusation of Biden—because it is in her interest not to believe.

There is little benefit of listing all the decadent, dangerous, and deadly positions Kamala has taken; however, her willingness to be on the ticket with Biden, who has refused to answer a charge of sexual abuse, shows her lack of character. She has always played to the gallery and reverses positions to meet her immediate needs. During the primary race, she believed Joe was guilty of sexual abuse of his senate aide Tara Reade. Now, she is partnered with a predator! That used to be known as being two-faced and would require her spending extra time each day putting makeup on her two faces.

Before the Never-Trumpers and Hate-Trumpers remind us again of Trump’s aggressive, appalling, and adulterous affairs, he never slept around to his political or monetary advantage. However, moral issues do not seem to concern most people.

On the political issues alone, the Biden-Harris ticket would literally destroy America! So, the choice is simple.

America deserves and must have more decent, qualified, honest officials. Still, mail-in-voting will only make a bad problem even worse, allowing into office many incompetent, indecent, and ignominious scalawags and lowlifes. It is no surprise our cities, states, and nation are a mess.

Headlines on July 24, 2020, in USSA News screamed, “Democratic Ex-Congressman Charged With Rigging Votes, Bribery, Falsifying Records And Obstruction.” The article revealed that a former congressman had been charged by the federal government with ballot stuffing, bribery, and obstruction. Michael Myers, 77, was charged with conspiring with and bribing a former elections judge in Philadelphia to add votes to favored candidates over several elections.

Yet, we are told over and over that voting fraud is no problem, but public facts disprove that.

According to Judicial Watch’s analysis of data released by the U.S. Election Assistance Commission (EAC) this year, “there are 378 counties nationwide that have more voter registrations than citizens living there and old enough to vote.” I’m math deficient, but I don’t think that is possible.

“According to one study, by News21, there have been 2,068 cases of alleged election fraud since 2000.” Yet, Democrats declare there is very little election fraud!

Electronic voting was supposed to improve the election process in making voting more efficient, quicker, and less fraud, but Rhode Island voters uncovered fraud. Rock Island County Republican voters gathered outside of the Rock Island County Clerk’s office on Friday, October 24, alleging a voting machine switched their vote. “Voters said when they selected a candidate on the electronic voting machine, the machine would switch their vote to the opposing candidate.” Is that fraud, or is it failure since Democrats had the same problem?

Voting machines are not as reliable as touted to be according to the Salina Journal on November 26, 2014 issue. “A malfunction of electronic voting equipment left 5,207 votes out of the original Nov. 4 Saline County, Kansas vote total.”

Brad Friedman of the very liberal Huffington Post admitted, “What we have here is an extraordinarily compelling case that our electoral system has gone terribly wrong…We’ve got one election after another that makes no sense whatsoever. They may have been rigged, they may have failed due to error – (but because they can’t be audited) it’s 100 percent faith-based voting.” This is the reason we now print out our machine ballot in Georgia, sign, and deposit it.

Recently, a local television station experimented with vote-by-mail, and it exposed the deficiencies of the system. WRDW in Philadelphia sent 100 “mock ballots” from across the city to a post office box set up specifically for the test. The results showed 21 percent of the votes hadn’t been delivered within the same city after four days. Some mailed a week prior were also missing.

The Times report goes on to reveal voter corruption in Texas, Indiana, Oklahoma, Kentucky, and Wisconsin. Yet, dishonest, desperate, and distressed Democrats keep telling us that there is no problem with voter fraud.

Also, on August 8, the New York City Board of Elections disqualified 84,208 vote-by-mail ballots in the June 23 Democratic presidential primary, “according to a report cited Wednesday evening by the New York Post.”

It is obvious to anyone deaf, dumb, and blind that mail-in-voting is not reliable. So, even the most rabid Democrat can understand that fact.

The Washington Times reported on voter fraud in Virginia. “A study by the watchdog Public Interest Legal Foundation found in just eight Virginia counties, 1,046 alien non-citizens successfully registered to vote.” But it gets worse. “Nearly 43,000 voters in Pennsylvania had potentially duplicate registrations in either Pennsylvania or other states.”

Another longtime problem, especially among Democrats, is the strange determination of dead people to vote. The Times reported on this phenomenon: “A report in Denver exposed multiple incidents in recent years where dead Coloradans were still voting.” But then, dead Democrats have been voting in Chicago for decades.

This November election, because of the hatred of Donald Trump, there will be massive problems: lost ballots, stolen ballots, late ballots, machine failures, machine malfunction, intimidation, multiple votes from the same people, alien voters, and of course, many dead people will rise and vote—all Democrats.

This week the Detroit News reported that Michigan clerks rejected 846 mailed ballots during the August 4 primary “because the voter was dead.” But the Democrats keep saying there is little voter fraud.

I just heard the shocking, surprising, and even startling news that my lifetime Republican cousin in Cook County, Illinois, is voting Democrat this November. But it would never happen if he were still alive.

A quote from one of my ebooks dealing with voter fraud is very appropriate here:

We stumble along to democracy’s demise, following along behind those “boys” from the Democratic clubhouse in Chicago. Two of their finest were in a graveyard in the middle of the night, copying names from tombstones to bring them back to life, at least politically. One of them fell two rows behind the other in getting the names.

“What’s the matter?” shouted the name-taker in the lead. “Hurry it up, will you?”

His teammate, who was lagging behind, complained, “The name on this tombstone is one of those long, complicated ones, probably Polish.”

“Well,” shouted the other, “Forget about that one. Go on to the next one.”

In a burst of righteous democratic zeal, the laggard yelled, “What do you mean, ‘Go on to the next one’? This guy has as much right to vote as anybody else in this graveyard!”

Alas, there is more truth than humor in that apocryphal incident. With vote-by-mail making it even easier for the dead to vote, we could be on a downward slide into the darkest days of our republic.

CNN opined, “there is very, very little evidence of any sort of widespread voter fraud in the country.” They chastised Trump for declaring vote-by-mail would result in cheating, pointing out that he had voted absentee ballot. Absentee voting is no problem, but there is a huge difference in that and everyone voting by mail. It has even been stated that ballots be provided for every person in the country, with no mention of citizenship or age. Or voter registration. It is an engraved invitation for illegal voting.

(Dr. Don Boys is a former member of the Indiana House of Representatives who ran a large Christian school in Indianapolis and wrote columns for USA Today for 8 years. Boys authored 18 books, the most recent being Muslim Invasion: The Fuse is Burning! The eBook is available here with the printed edition (and other titles) at www.cstnews.com.