As we look ahead to the last jobs report before the Nov. 3 US election, a growing number of corporations across various hard-hit industries are announcing tens of thousands of layoffs, as ‘PPP’ employment restrictions expire and the financial backlash from COVID-19 continues to ravage corporations and households.

Royal Dutch Shell announced Wednesday morning, a new layoff program to cut upwards of 9,000 jobs, or about 10% of its workforce, as the oil major overhauls its oil and gas segments to low-carbon energy.

The Anglo-Dutch company said it would cut between 7,000 to 9,000 workers by the end of 2022. The total includes around 1,500 workers who have already agreed to leave the company this year.

The reductions are a move by Shell to decrease its corporate footprint and save costs as it transitions into low-carbon energy.

“Reduced organisational complexity, along with other measures, are expected to deliver sustainable annual cost savings of between $2.0 to $2.5 billion by 2022. This will partially contribute to the announced underlying operating cost reduction of $3.0 to $4.0 billion by the first quarter of 2021. Job reductions of 7,000 to 9,000 are expected (including around 1,500 people who have agreed to take voluntary redundancy this year) by the end of 2022,” the company said in a press release.

In a statement, Shell CEO Ben van Beurden said, “We have to be a simpler, more streamlined, more competitive organization that is more nimble and able to respond to customers.”

“Make no mistake: this is an extremely tough process. It is very painful to know that you will end up saying goodbye to quite a few good people,” van Beurden added.

As for Shell’s oil and gas production, there was a noticeable sharp drop in output to about 3.04 million barrels of oil equivalent per day due to the decline in demand because of the virus pandemic and a busy hurricane season in the US Gulf Coast that forced offshore platforms to halt operations. 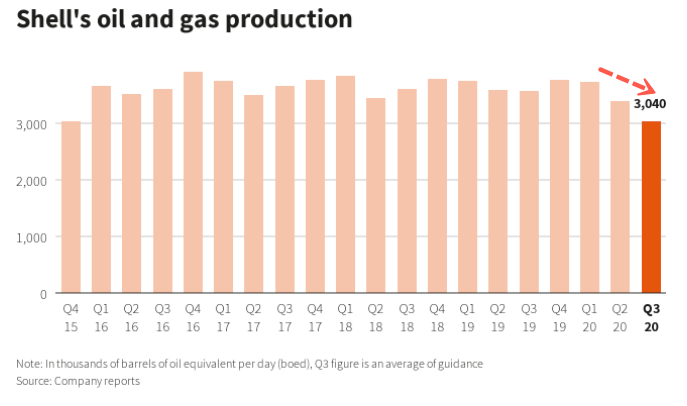 “Shell is exploring ways to reduce spending on oil and gas production, its largest division known as upstream, by 30% to 40% through cuts in operating costs and capital spending on new projects,” sources told Reuters in early September.

We noted, in late June, Shell wrote down up to $22 billion worth of assets and warned about the “impact of COVID-19 and the ongoing challenging commodity price environment.”

As for Shell’s net-zero carbon emission ambitions by 2050, well, Van Beurden said, oil and gas would still be produced by that date, but it would mostly sell low-carbon electricity, low-carbon biofuels, and hydrogen.

“We have to be net-zero in all our operations, which means major changes at refineries, chemicals sites, on-shore and offshore production facilities. But it also means that we have to change the type of products that we sell,” he added.

Bloomberg quoted Barclays Plc analyst Lydia Rainforth’s latest research note that said Shell’s transformation to a “leaner and lower-carbon organization is the right” plan, but the “macro environment is still challenging, this may take some time to reflect in the share price.”

And now, thousands of aviation layoffs loom as a dysfunctional Congress has yet to make meaningful progress in passing the next round of stimulus, and its concomitant bailout of the airline industry.