Addressing lawmakers in Ankara, Turkish president says the Palestinian people have lived in the capital ‘for thousands of years’

Turkish President Recep Tayyip Erdoğan on Thursday implied that Jerusalem belongs to Turkey, referring to the Ottoman Empire’s control over the city for much of the modern era.

“In this city that we had to leave in tears during the First World War, it is still possible to come across traces of the Ottoman resistance. So Jerusalem is our city, a city from us,” he told Turkish lawmakers during a major policy speech in Ankara. “Our first qibla [direction of prayer in Islam] al-Aqsa and the Dome of the Rock in Jerusalem are the symbolic mosques of our faith. In addition, this city is home to the holy places of Christianity and Judaism.”

The Ottoman Empire ruled over Jerusalem from 1516 to 1917. Modern Turkey, its successor state, has long stressed its enduring connection to the holy city, regularly condemning Israel’s alleged efforts to “judaize” it and the US administration’s December 2017 recognition of it as Israel’s capital.

Jerusalem has been the capital of Israel since the country’s founding, and the Jewish people have thousands of years of history in the city, backed up by extensive archaeological finds.

During a lengthy speech at the opening of the Turkish parliament’s new legislative session, Erdoğan spent several minutes lamenting the fate of Jerusalem and the Palestinians’ plight.

“Another crisis that our country and our nation carefully follow is the oppression of Israel against the Palestinians and the indifferent practices that disregard the privacy of Jerusalem,” he said toward the end of his address.

“The issue of Jerusalem is not an ordinary geopolitical problem for us. First of all, the current physical appearance of the Old City, which is the heart of Jerusalem, was built by Suleiman the Magnificent, with its walls, bazaar, and many buildings. Our ancestors showed their respect for centuries by keeping this city in high esteem.”

The Palestinian people have been living in Jerusalem “for thousands of years,” but they were occupied and had their rights violated, the Turkish leader went on. 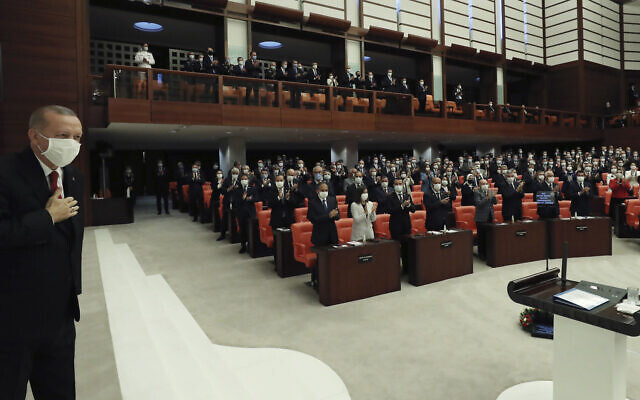 He went on to vow to “pay close attention” to the Palestinian issue.

“We consider it an honor on behalf of our country and nation to express the rights of the oppressed Palestinian people on every platform, with whom we have lived for centuries,” he said. “With this understanding, we will follow both the Palestinian cause, which is the bleeding wound of the global conscience, and the Jerusalem case to the end.”

The Israeli Foreign Ministry declined to comment on Erdoğan’s speech.

Recep Tayyip Erdogan has news for Jerusalemites: “Jerusalem is ours. One of our cities,” the Turkish president declared last Thursday at the opening of the legislative session of the Turkish parliament in Ankara.

Erdogan didn’t mean that Jerusalem is a Muslim city that belongs to all Muslims. As far as he’s concerned, Jerusalem belongs to Turkey.

Jerusalem is the red flag Erdogan likes to wave in the faces of Saudi Arabia, Jordan and the Emirates

It is a city, Erdogan said, “that we left in tears during World War I and where vestiges of the Ottoman resistance can still be found. The physical appearance of the Old City, which is the heart of Jerusalem, was constructed by Suleiman the Great, along with the walls, the bazaars and many other buildings. Our forefathers displayed great respect toward it for hundreds of years.”

>> Netanyahu and Erdogan in unlikely alliance against Iran in Nagorno-Karabakh?

This revelation was not the result of some sudden inspiration. Turkish activists from Erdogan’s ruling Justice and Development Party and organizations affiliated with it have been active on the Temple Mount for years, in coordination with the Islamic Movement and the Muslim Waqf (religious trust), the Jordanian-controlled custodian of the Old City compound.- Advertisment –

But this time things are not being said in the context of the religious connection between Turkey and Jerusalem. As someone who skips from one front to the next – from Libya to Syria and from Qatar to Azerbaijan – for Erdogan Jerusalem is the red flag he likes to wave in the faces of Saudi Arabia, Jordan and the Emirates.

It’s not enough that Jordan is afraid that Saudi Arabia will deprive it of its status as the country responsible for holy places: Now Turkey is positing itself as a legitimate competitor for ownership and control over them. The vision of an Islamic caliphate under Erdogan’s leadership is his new baby, and what’s good for Hagia Sophia, the church that was turned into a mosque, is apparently appropriate for the Church of the Holy Sepulchre as well.

A speech about Jerusalem and about the historical connection between Turkey and the Palestinians could perhaps have been used in ordinary times as a means to divert attention from the upheaval Turkey is undergoing.

But Jerusalem is not the main issue of concern for its people today. More important is the war between Armenia and Azerbaijan over the future of Nagorno-Karabakh region, a predominantly Armenian enclave stuck in the heart of Azerbaijan and now a site of violent clashes that threaten to provide Turkey with an excuse for military intervention; the economic crisis and plummeting of the exchange rate of the Turkish lira, which Ankara is unable to stop; and the spread of COVID-19, which to date has taken the lives of over 8,300 people.- Advertisment –

Health Minister Fahrettin Koca caused a public furor last week when he announced that his ministry doesn’t report on the number of those infected by the disease, only on the number undergoing treatment. “Not every case of COVID-19 is someone ill with the virus,” said Koca, thereby confirming suspicions that Turkey does not publish accurate data, so as to demonstrate its success in eliminating the illness.

Figures presented by the opposition, so they claim, point to the fact that the number of those infected is almost twice that presented by the Health Ministry. For example, on September 10 they identified 29,377 as having the virus – when on that same day the ministry reported only 1,512. Erdogan can not fire the opposition, but the Turkish Medical Association, which continues to criticize the government’s health policy consistently, can be disbanded. And that is just what the president’s coalition partner, Devlet Bahceli, leader of the Nationalist Party, is now trying to do.

In addition to getting rid of the medical association, Bahceli has proposed a series of necessary “reforms,” such as restoring the death penalty and revamping the Supreme Court and the Constitutional Court. Erdogan has already hastened to declare his support of Bahceli’s proposals, especially the one regarding Constitutional Court. The battle against that Turkish court is very similar, incidentally, to that being waged in Israel between the government and the Supreme Court – and for the same reasons.

In September Turkey’s Constitutional Court cancelled the clause in the Law on Demonstrations and Public Meetings which determines that “demonstrations or parades cannot be held on intercity highways.” Interior Minister Suleyman Soylu attacked the Constitutional Court’s president, Zuhtu Arslan, at the time, saying, “If you claim that we’re a free country, then you don’t need police protection. Let’s see you ride to work on your bicycle, are you willing?”- Advertisment –

In response, one of the senior justices, Engin Yildirim, posted a picture in which he is riding his bicycle, reminding the minister that “judges are independent and operate according to the law and the constitution. The legislative and executive authorities must implement the court rulings without delay.”

Three months earlier the Constitutional Court had ruled that the prolonged detention (over three years) of the former head of the pro-Kurdish party HDP, Selahattin Demirtas, exceeded a reasonable period of time and that his rights were being undermined. The criminal court that discussed the case paid no attention to this ruling.

If the reform that Erdogan wants, which was approved already in 2017, is implemented, all the Supreme Court justices are expected to be replaced by new judges, many of whom will be appointed by the president.

Meanwhile, in order to complete its domination over rivals, the Turkish government last Thursday began to implement a new social media law, which requires every platform with over 1 million users (Facebook, Twitter, Instagram) to respond within a few hours to every demand to remove content from the Information and Communications Technology Authority, and requires that internet providers store and preserve the surfing history of its users and to place it at the disposal of the authorities. Infractions of the law would mean heavy fines, curtailed advertising and a reduction in the bandwidth used by the media.

Turkey, which is in 154th place (out of 180 countries) in the World Press Freedom index, justifies the new regulations as being needed to safeguard the country’s security, human dignity and right to privacy. Apparently there’s no other option but to send Israeli Minister for Cyber and National Matters David Amsalem to Ankara for an urgent refresher course.