By CHRISTOPHER EBERHART FOR DAILYMAIL.COM

A Chinese virologist who was among the first people to suggest that coronavirus leaked from a lab has accused Anthony Fauci and top scientists of covering the leak up.

Dr Li-Meng Yan claims coronavirus is a bioweapon and accuses Dr. Anthony Fauci of being among scientists and organizations who knew about it and tried to hide it.

There are growing calls across the world for claims that coronavirus accidentally leaked from the lab in Wuhan to be taken seriously after US intelligence agencies launched an investigation.

A growing number of experts believe that China was conducting gain of function research on coronavirus, which genetically enhances viruses so that scientists can develop vaccines, and an accident resulted in its release into the world.

The Chinese communist party is accused of hiding this gain of function research at the Wuhan Institue of Virology with the help of US scientists who funded it, however claims that the virus is a bio-weapon are still regarded with scepticism.

Fauci and a host of scientists still insist that it is most likely that coronavirus spread to humans from bats or pangolins while failing to rule out the lab leak theory.

But a Wednesday night interview on Newsmax, Dr. Li-Meng Yan said Fauci‘s emails, which were published by Buzzfeed and the Washington Post on Tuesday, proved he knew about the Chinese gain of function research before the pandemic started.

They showed leading virus experts warning Fauci that COVID-19 may have been created in a lab while he publicly played such claims down.

‘These people knew what happened, but they chose to hide for the Chinese Communist Party and their own benefits,’ Yan said.

The emails show that on Jan. 1 2020, shortly after the first cases of the virus were detected, Dr. Kristian Anderson, an immunologist at the Scripps Research Institute emailed Fauci saying that some features of the virus could potentially 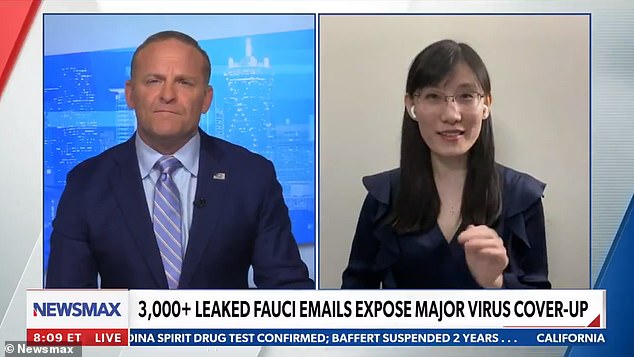 Dr. Li-Meng Yan said Fauci ‘s emails proved he knew about warnings that coronavirus could be the result of Chinese gain of function research before the pandemic started

President Biden has ordered the intelligence community to redouble efforts into finding out whether the novel coronavirus emerged naturally or from a lab. Researchers at the Wuhan Institute for Virology are seen in this February 2017 file

How Fauci flip-flopped on the origins of COVID

April 2020: Fauci repeatedly made public statements suggesting that that COVID was the result of an ‘unusual human-animal interface’ in a Chinese ‘wet market’ and that ‘the mutations that it took to get to the point where it is now is totally consistent with a jump of a species from an animal to a human.’

May 2020: Still adamant that he didn’t believe the coronavirus was man-made. ‘If you look at the evolution of the virus in bats and what’s out there now, [the scientific evidence] is very, very strongly leaning toward this could not have been artificially or deliberately manipulated,’ he told National Geographic in an exclusive interview published May 4, 2020. ‘Everything about the stepwise evolution over time strongly indicates that [this virus] evolved in nature and then jumped species.’

Late May 2021 to early June 2021: During an event called ‘United Facts of America: A Festival of Fact-Checking,’ Fauci was asked if was ‘still confident’ that the virus evolved naturally.

‘No, actually … I am not convinced about that. I think we should continue to investigate what went on in China until we continue to find out to the best of our ability what happened,’ Fauci said. ‘Certainly, the people who investigated it say it likely was the emergence from an animal reservoir that then infected individuals, but it could have been something else, and we need to find that out.’

He added: ‘So, you know, that’s the reason why I said I’m perfectly in favor of any investigation that looks into the origin of the virus.’

Shortly after, Fauci sent an urgent email to a deputy of his, Hugh Auchincloss, asking him to review a document he was attaching, which was titled ‘baric, shi et al nature medicine SARS gain of function.’

Although the contents of the attachment are unknown, the title, it’s claimed that is likely a reference to Dr. Ralph Baric a US-based virologist, who had performed US government-funded research in collaboration with Wuhan Institute scientist Dr. Shi Zhengli, who specializes in coronavirus transmission in bats.

In other emails from early in the pandemic, British medical researcher Dr. Jeremy Farrar, who was involved in early top secret conference calls discussing the virus, shared an article from the website ZeroHedge suggesting that the virus could be a bioweapon.

On April 17, 2020 Fauci announced that it was believed the virus had emerged from bats in China.

In an email sent two days after the announcement, Dr. Peter Daszak, a virologist who was doing US government-funded coronavirus research in Wuhan, thanked Fauci for: ‘publicly standing up and stating that the scientific evidence supports a natural origin for Covid 19 from a bat-to-human spillover.’

Daszak then persuaded 26 other scientists to sign off on a letter he had written to world-leading scientific journal The Lancet claiming the virus could only have been natural in origin and to suggest otherwise creates ‘fear, rumours, and prejudice’.

The letter flatly denied the virus could have originated in a lab in Wuhan and dismissed it as a ‘conspiracy theory’.

The letter was seen as so influential it cowed most experts into refusing even to consider that the virus could have been man-made and escaped from the Wuhan Institute.

Jamie Metzl, who sits on the World Health Organization’s advisory committee on human genome editing and is a form Bill Clinton administration staffer, said Dr Daszak’s letter was a ‘form of thuggery’.

He said: ‘The Lancet letter was scientific propaganda and a form of thuggery and intimidation.

Dr Yan has published three reports on the origins of coronavirus – two last year and one this year. The latest report published on March 31 said: ‘The causative agent of COVID-19, is not a naturally occurring pathogen but an Unrestricted Bioweapon.

‘It is a product of the bioweapons program of the Chinese Communist Party (CCP) government, the network of which includes not only the CCP scientists but also certain overseas scientists and organizations.’

All three reports were published without peer review on Zenodo.

The scientific establishment and liberal media for months dismissed the Wuhan lab leak as a conspiracy theory after Donald Trump suggested it was a possibility – until President Joe Biden announced that intelligence agencies are investigating.

British intelligence reportedly assessed the theory recently and upgraded its likeliness from ‘remote’ to ‘feasible’.

Then came Fauci’s email dump on Tuesday, when more than 3,200 of his emails from January to June 2020 were obtained and published by Buzzfeed and the Washington Post.

Yan referenced another of these emails during her interview with Newsmax.

On February 1, 2020, one of Fauci’s direct reports, Dr. Hugh Auchincloss, wrote in an email to Fauci that the ‘experiments were performed before the gain of function pause but have since been reviewed and approved by NIH (National Institutes of Health).’

Fauci and Auchincloss were discussing a paper that Fauci sent him. 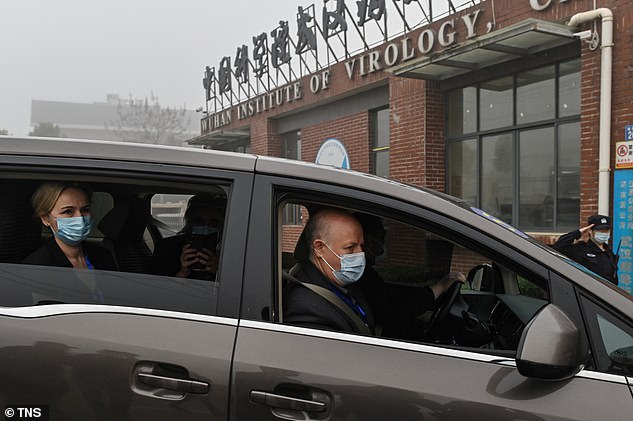 Peter Daszak, right, Thea Fischer, left, and other members of the World Health Organization team investigating origins of COVID-19 arrive at the Wuhan Institute of Virology in February 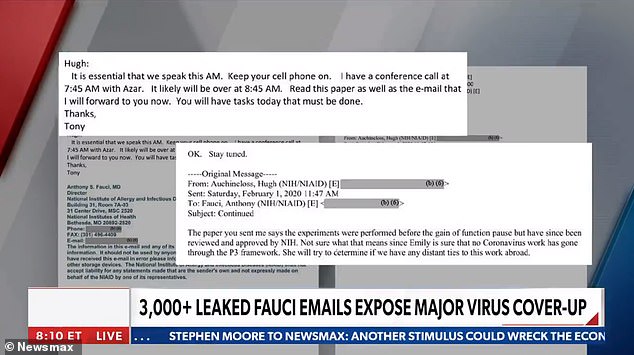 Email exchange between Dr. Anthony Fauci and one of his direct reports, Dr. Hugh Auchincloss

The idea the coronavirus escaped from a Wuhan lab was at best a ‘fringe theory’ until recently, when the Biden administration ordered a review Virologist reveals snippet of how coronavirus was ‘man-made’ in China\

ORIGINS OF COVID-19: THE THEORIES

US state officials have given momentum to the idea that COVID-19 either leaked from a lab or was man-made by China as some kind of weapon against humanity.

A Wuhan wet market was first thought to be the breeding ground of the virus, where the selling of live, wild animals would have given the perfect opportunity for it to naturally spread between species.

It is thought the virus first developed in bats before passing on to a creature such as a pangolin that then came into contact with humans and transmitted the virus.

Once it entered humans, the coronavirus is likely to have mutated to survive and then escalated out of control as a result of an unprepared population.

There are also theories that the virus was genetically engineered by scientists, or that it has actually been around for years and even killed people in the past.

Two high security laboratories in the city – the Wuhan Centre for Disease Control and the Wuhan Institute of Virology – have been the subject of many conspiracy theories.

President Donald Trump claims he has seen evidence the virus, which he solely blames China for, came from Wuhan Institute of Virology – but he is not allowed to reveal it.

The Institute has denied the claims from the early days of the outbreak.

In April, Trump said: ‘We are doing a very thorough examination of this horrible situation that happened.’

Secretary of State, Mike Pompeo, claimed in May there is ‘enormous evidence’ the coronavirus outbreak originated in a Chinese laboratory – but failed to provide any of the alleged evidence.

Gain of function research involves experimentation that aims to increase the transmissibility and/or virulence of pathogens.

In her March 31 report, Yan wrote, ‘SARS-CoV-2 was created based on template viruses ZC45 and ZXC21, which were originally discovered in bats by scientists of the People’s Liberation Army (PLA).

‘The subsequent laboratory modifications had enabled its ability to infect humans as well as had enhanced the virus in its pathogenicity, transmissibility, and lethality.’

An MIT peer review, which concluded by admonishing Yang’s work, said, ‘If valid, these lines of evidence would support the disturbing claim that SARS-CoV-2 is a man-made virus; however, if the claims are not adequately substantiated, this work is defamatory, grossly negligent, and ethically dubious.’

Yan, a postdoctoral fellow at Hong Kong University before she fled to the United States in April, told The Washington Post in February that she used Zenodo because of its ability to instantly publish information without restrictions.

Zenodo is a research repository used for publishing scientific findings without reviews.

She told The Washington Post that she feared the Chinese government would obstruct publication of her work.

Since her reports were published, she’s been ostracized. Twitter shut down her account for months. Scientists from leading American universities downplayed her trilogy of reports, saying they’re deeply flawed.

Zenodo, where Yan published her reports without any review, posted a warning at the top of her research paper saying, ‘Caution: Potentially Misleading Contents.’

‘Consistently critical peer review has been received that this record does not follow the norms of scientific rigour or balance, and thus the main claims may not stand the test of scientific scrutiny.’

Despite the controversy and backlash, her September 21, 2020 paper has been viewed over 1.2million times and used in multiple wing-ring reports.

Now that the Biden administration is joining worldwide pressure for China to be more open about the outbreak, her work is being brought to the forefront.

China, meanwhile, insists that the virus simply mutated and passed naturally from animals to humans, likely from a market in the city of Wuhan.

Last week, Biden ordered intelligence officials to ‘redouble’ efforts to establish the origins of SARS-CoV-2 and report back in 90 days and directed U.S. national laboratories to assist with the investigation.

In Wednesday night and Thursday morning television interviews, Fauci has kept the door open for the possibility that the coronavirus was the result of a Chinese lab leak, but doubled down, saying multiple times it’s unlikely.

‘I have always said and will say today to you … that I still believe the most likely origin is from an animal species to a human,’ Fauci said Thursday morning on CNN.

‘The idea, I think, is quite far-fetched that the Chinese deliberately engineered something so that they could kill themselves, as well as other people. I think that’s a bit far out.’