A man is demanding answers after sharing distressing footage of his elderly dad collapsing and suffering spasms as he’s arrested for failing to wear a face mask in public.

The stomach-churning incident was filmed on Monday morning in Brisbane’s Botanic Gardens after Queensland’s lockdown was extended to stem the spread of Covid in the community.

According to the man’s son, who shared the footage online, he suffers from a medical condition which causes him breathing difficulties and heart problems.

During the arrest, he fell to the floor and started to spasm, gasping for air and flailing as he tried to reach for his backpack – which contained his medication.

Police confirmed to Daily Mail Australia that an ambulance was called and paramedics ‘did not identify a medical issue’, but that he was taken to hospital as a precaution.

The distressing scenes were filmed by the man’s partner and left his son feeling rattled and helpless when he was eventually notified.   Man collapses while being arrested for not wearing mask

Video appears to show four police officers questioning the man as they arrest him and lead him away from the park for failing to answer their questions ‘reasonably’. (click on link above)

The woman repeatedly told officers that the man had an exemption and tried to provide personal details.

But an officer was recorded stating that he ‘was not confident [the man] would comply with directives’ if he were to remove the handcuffs.

According to the man’s son, he is required to carry medication with him at all times and had a legitimate medical exemption from wearing the face mask.

‘He was interrogated as to why he was there, what he was doing and why he wasn’t wearing a mask… he answered all of these questions,’ the man said. 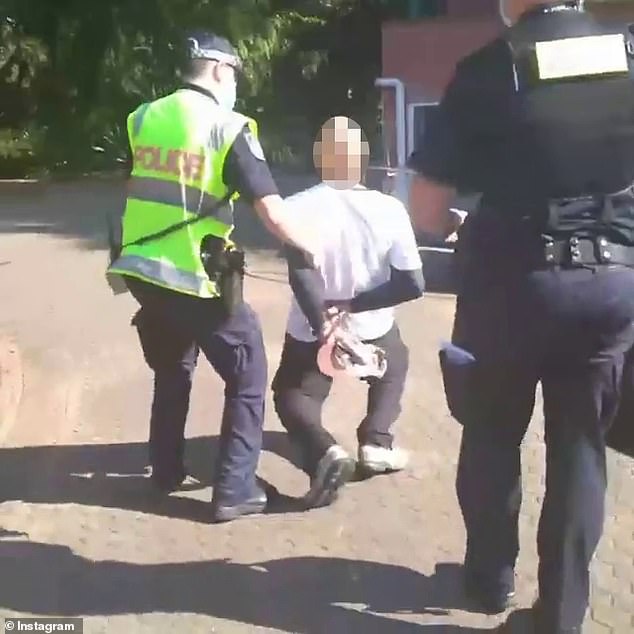 As the man was led away from the park in handcuffs, the footage shows him dramatically dropping to the floor and beginning to spasm

As the man was led away from the park in handcuffs, the footage shows him dramatically dropping to the floor and beginning to spasm.

The officers immediately respond, trying to turn the man on his side as his partner screams for help, explaining that there is medication in a pocket of his bag.

‘Do you believe me now you pr***s?,’ she asked, before instructing an officer to make room so that she can administer the dose for him.

‘Here, let me do it darling… Absolutely disgraceful.’

An officer was filmed explaining that he was legally not allowed to administer the medication, while a female cop reassured the woman that an ambulance had been called. 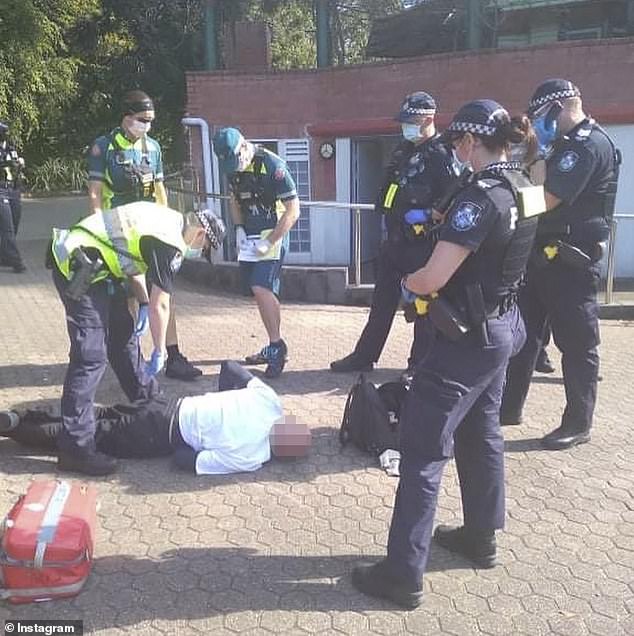 When sharing the distressing footage, the man’s son said it ‘doesn’t make any sense’.

‘He did not do anything illegal, he did not retaliate in a violent manner. He was conducting himself peacefully and not looking for trouble.’

He has posed several questions to the officers who arrested his dad, wanting to know exactly what he did to wind up in handcuffs and under arrest.

‘This hurt me more than anything I’ve experienced… Seeing my father get arrested as he was having a seizure,’ he said.

The Brisbane-based bodybuilder said he ‘hadn’t cried for many years [but] balled [his] eyes out’ upon seeing the footage, knowing he ‘couldn’t do anything to protect my father’.

Queensland is in the midst of an unravelling Delta Covid variant outbreak, with 47 cases identified in just four days.

As a result, the Sunshine State is enduring a week-long snap lockdown in an attempt to keep cases at bay.

Chief Health Officer Jeanette Young has mandated that face masks be worn everywhere outside the home to minimise the risk of spreading or catching the virus. 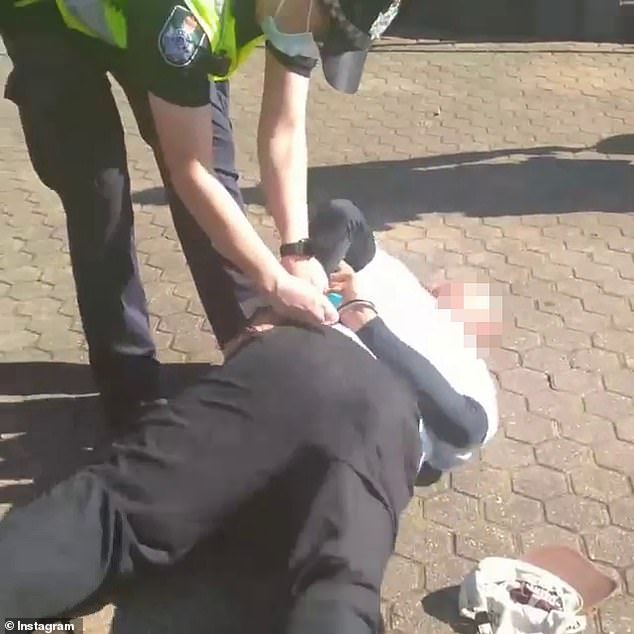 An officer was filmed explaining that he was legally not allowed to administer the medication, while a female cop reassured the woman that an ambulance had been called

‘On August 2, police patrolling in the Botanical Gardens arrested a man for failing to comply with directions under the Public Health Act 2005 (Qld),’ a spokesperson said.

‘During the arrest, the man appeared to collapse.‘

‘The Queensland Ambulance Service was requested, attended and did not identify a medical issue however the man was transported to hospital as a precaution.

‘As police had discontinued the arrest at that time, investigations are continuing into any possible offences committed on that day.’

Experts reaction to whether masks need to be worn outdoors

An expert debate on whether masks should be worn outdoors has been published in the BMJ.

“The evidence for mandating mask wearing indoors remains weak and circumstantial and it should be remembered that in the UK, it is intended to support other measure like social distancing, rather than act as an alternative.

Their effectiveness outdoors remains even more questionable, and will remain so without evidence.

It’s highly unsatisfactory, not to mention profoundly unscientific, to point the finger at outside events that have had substantial indoor elements and claim that they’re evidence of spread outdoors.

Similarly, localities with stricter mask mandates are also likely to be stricter with other measures.

“In order to get buy-in from the public and retain their trust as the pandemic grinds on, any new or continued restrictions on people’s lives need to be based on sound science rather than supposition.”

“Face masks do not need to be worn out of doors for the reasons clearly stated by Dr Cevik. Indoor transmission is about 19 times more effective than outdoor transmission.  In the UK there has been no obvious impact of crowded beaches or demonstrations on subsequent transmission. Events such as Cheltenham last year that did seemed to be followed by increased transmission seem to also have packed pubs and public transport.

“There are also good reasons for not wearing masks outdoors. If the masks get wet through rain or through condensation in cold weather they do not filter properly, so could be less effective when you do go indoors.”

“We know that masks, when worn correctly and in certain settings, can reduce the risk of virus transmission. However, it is less clear if this benefit extends to when masks are worn more generally, even less so when outdoors. It is too easy to draw on anecdotal evidence to support or refute the impact of mask wearing on reducing virus transmission, and until we have robust controlled trial data we will never know for sure.”

‘Should masks be worn outdoors?’ by various authors was published in The BMJ at 23.30 UK TIME on Wednesday 28 April 2021.