Today Sen. Roger Marshall predicted a “worldwide famine” will shortly begin as a result of the war in Ukraine, and suggested that U.S. dependence on Russian products that are now under heavy U.S.-led sanctions will play a role.

Marshall, who serves on the Senate Agriculture, Energy & Natural Resources, discussed the implications of the war in Ukraine with Maria Bartiromo on Fox Business earlier today.

“I’m a big agriculture guy,” said Marshall, a medical doctor from Kansas. “12-15% of the agriculture products, corn and wheat, sunflower oil come through that Black Sea. Fertilizers come from that area as well.”

As Marshall pivoted to the developing Ukrainian refugee crisis and lauded Poland’s response, Bartiromo returned the conversation to Marshall’s famine prediction. She specifically asked it there would be a “famine in Europe” as a result of the war.

“This will be a worldwide famine,” Marshall replied.

“I think it will be even worse next year than this year,” said Marshall. After repeating that Ukraine is responsible for producing 12-15% of the world’s supply of wheat, Marshall explained that Ukrainian farmers will, at minimum, have “problems getting fertilizer” and “problems getting tractors in the field, [because] all the diesel fuel is going towards their war efforts.”

If the war continues, then “there will be a famine across the world,” said the U.S. Senator.

Then, the Kansan explained that American farmers may not be able to meet the increased demand because of increasing prices at home.

“I think American farmers are doing their best to respond,” said Marshall, “but we can’t get fertilizer.”

“The fertilizer prices have quadrupled, diesel fuel has doubled,” he added, “So many of the fertilizers and the herbicides we can’t even get right now.” 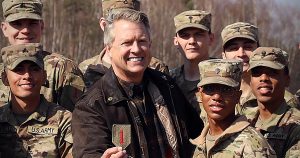 Many countries expressed skepticism at Western sanctions on Russia, and India openly refused to participate in the sanctions because of its dependence on Russia for fertilizer and cooking oil.

Russia was sanctioned heavily by the West after it invaded Ukraine last month following a years long standoff over the disputed Donbass region. Russia claims it launched a “special military operation” to protect ethnic Russians from Ukrainian state violence, while Ukraine and much of the international community say the invasion was unprovoked.

Asked why the United States is dependent on Russia and Ukraine for energy and food, Marshall offered what may be considered an America First response.

“Whether on chips being made across the ocean, or we’ve become dependent on Russian oil,” he lamented. “Why do we keep making the same mistakes?”