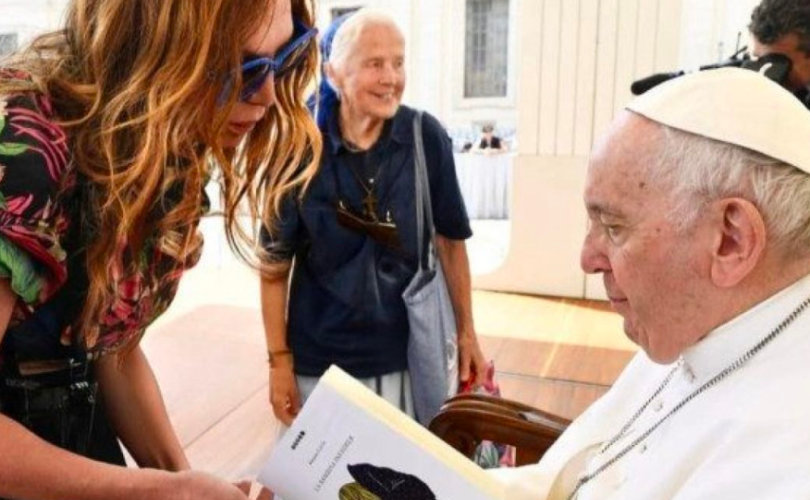 VATICAN CITY (LifeSiteNews) – Pope Francis met with a group of “transgender” individuals Wednesday, with one of the group – a man who now lives as a woman – claiming the Pope told him to “always be myself.”

At the end of his General Audience June 22, Pope Francis met with a group of six transgender people, who were accompanied by an LGBT-promoting priest, a nun, and the mother of a transgender boy.

One of the group, Alessia Nobile – a 43-year-old man who now lives as a woman – told fanpage.it that “it was exciting. We felt welcomed.”

Nobile presented himself to Pope Francis “as a transgender girl,” but said that Francis replied “he didn’t care who I was, that we have one Father, as if he wanted to tell me ‘You are a sister’.” Life is winning!With the overturning of Roe v. Wade, the pro-life movement needs a truthful voice in the media now more than ever. Please donate today to help our coverage reach millions around the globe. Pro-lifers around the world and the innocent unborn children are counting on you to give them a voice.

Nobile also gave the Pope a copy of his autobiography, called “La bambina invisibile,” which details his transgender thoughts and desires while growing up.

Pope Francis reportedly told Nobile, “You did well to write your story. Bravo!”

Nobile added that Francis told him to “always be myself, but not to be wrapped up in prejudice against the Church.” The 43-year-old has a degree in social sciences, but currently earns his living as a “sex worker.”

He praised Francis’ welcome for the transgender group, saying that the meeting with the Pope sent “an important message”:

Often we transgender people who are victims of prejudice, also nourish prejudices towards others and we think, starting with prejudice and prejudice, that the Church does not accept us regardless and we do not even seek a meeting.

I instead felt welcomed, taken by the hand, and embraced. In the month of Pride I think this is an important message. The best thing about having spoken with Pope Francis is that it was simply a confrontation between people and not about our diversity.

The meeting was reportedly organized by Sister Genevier, a nun who lives as part of a tiny community in an amusement park. When she suggested the meeting to Pope Francis, Sr. Genevier was reportedly told to “bring them all.”

Sr. Genevier was accompanied by an un-named priest, according to Nobile, who is part of a pro-LGBT organization “Strategia Nazionale LGBT.”

Nobile himself has garnered media attention for reportedly being the first transgender “woman” in the south-eastern Italian region of Puglia “to obtain a registry sex change in 2016 without being forced to undergo sex reassignment surgery.”

All the other members of the group, including the five other transgender individuals, met the Pope individually and spoke with him for a few moments.

LifeSiteNews is on the cutting edge of life and family news reporting. Support our Summer Campaign by giving a gift of support today: give.lifesitenews.com

Their meeting is not included in the recorded stream of the Papal Audience found on the Vatican News YouTube channel.

However, nearly 300 photos found on Vatican Media’s site document the Pontiff’s meeting with Nobile and the entire group.

LifeSiteNews contacted the Holy See Press Office asking for clarification on the Pope’s meeting with Nobile, but did not receive a response by the time of publication.

Pope Francis has apparently been making an increased number of such “important messages” to the LGBT movement in recent months. During a private audience in May, Francis allegedly told Professor Aaron Bianco, who is in a same-sex “marriage,” to continue his efforts to make the Church more open to homosexual unions.

Earlier this week on Monday, Pope Francis then gave a private audience to dissident priest Father Richard Rohr, who has a long history of dissenting from Catholic teaching on a number of topics, including homosexuality, abortion, spirituality, and the primacy of the Catholic faith. Fr. Rohr also runs a meditation center promoting Buddhist and Hindu spirituality.

Over last Easter, Pope Francis personally invited a group of transgender individuals to the Vatican, to receive their abortion-tainted COVID-19 injections.

His support for transgender ideology dates further back also, as in January 2015 he granted an audience to the two women whom the world’s press dubbed a “transsexual man and his fiancée.”

Despite this, Catholic teaching on transgender issues remains unchanging, as the Catechism of the Catholic Church states: “Everyone, man and woman, should acknowledge and accept his sexual identity.” (CCC # 2333

The Congregation for the Doctrine of the Faith’s 1975 document, Persona Humana, also echoed this with the words, “There can be no true promotion of man’s dignity unless the essential order of his nature is respected.”