By WILL STEWART and DAVID AVERRE FOR MAILONLINE

Warmongering Russian president Vladimir Putin has sent two supersonic Tu-160 nuclear missile bombers soaring over the Barents Sea north of Norway, Finland and Sweden in yet another show of force.

Putin and other Russian officials on several occasions warned Finland and Sweden, who had long been militarily neutral until their decision to apply for NATO membership, not to join forces with the Western security bloc upon threat of military action.

The despot later rolled back his comments in the wake of the Nordic countries’ formal application in May, telling pundits: ‘There is nothing that could bother us about Sweden and Finland joining NATO. They can join whatever they want,’ in a scrambling attempt to save face.

Final two candidates for PM will be selected TODAY after supporters of Liz Truss urge rival camps not to ‘lend’ votes to influence Tory leadership ballot, and other top stories from July 20, 2022.

But the deployment of two aircraft capable of carrying and launching nuclear warheads serves as a stark reminder of Moscow’s opposition to the expansion of NATO along the northern Russian border.

The flyover comes as the Russian leader arrived in the Iranian capital Tehran on only his second visit outside Russia since the start of the war in Ukraine. 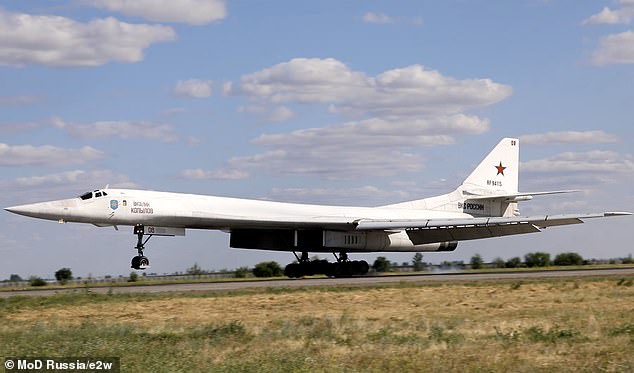 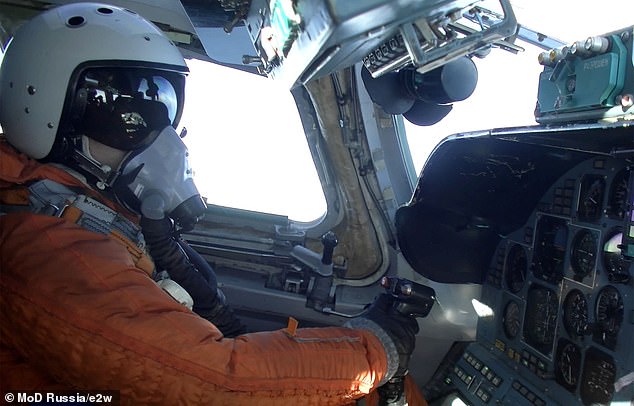 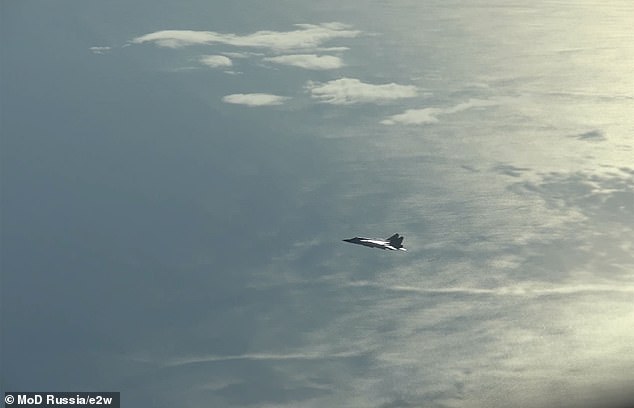 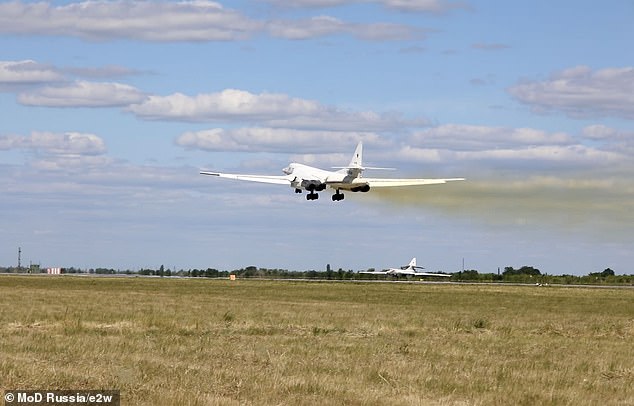 Russia’s defence ministry released a cookie-cutter statement in the wake of the flyover, which coincided with Russian missiles striking several settlements in eastern and southern Ukraine.

‘All flights by Russian Aerospace Forces aircraft are carried out in strict compliance with international rules of airspace use,’ the ministry said.

The Tu-160 is a heavy strategic bomber capable of supersonic flight and designed to deliver nuclear and conventional strikes against reinforced military targets or those in remote areas.

It can carry up to a staggering 88,000lbs’ worth of weaponry including nuclear and hypersonic missiles as well as conventional warheads – but must be accompanied by fighter jets as it lacks defensive weapons.

The flight of the White Swans over the Barents sea close to Finnish and Swedish shores represents yet another example of Putin’s tried and tested nuclear sabre-rattling to discourage further military action from NATO and the West.

Russia’s show of nuclear readiness over the Barents sea came as Putin arrived in the Iran for a visit intended to deepen ties with regional heavyweights as part of Moscow’s challenge to the United States and Europe amid the war in Ukraine.

In only his second trip abroad since Russian tanks rolled into Ukraine on February 24, Putin is scheduled to hold talks with Iran’s President Ebrahim Raisi and Turkish President Recep Tayyip Erdogan about the pressing issues facing the region, including the conflict in Syria and a UN-backed proposal to resume exports of Ukrainian grain to ease the global food crisis.

Russian officials visited an airfield in central Iran at least twice in recent weeks to review Tehran’s weapons-capable drones for possible use in Ukraine, the White House has alleged. 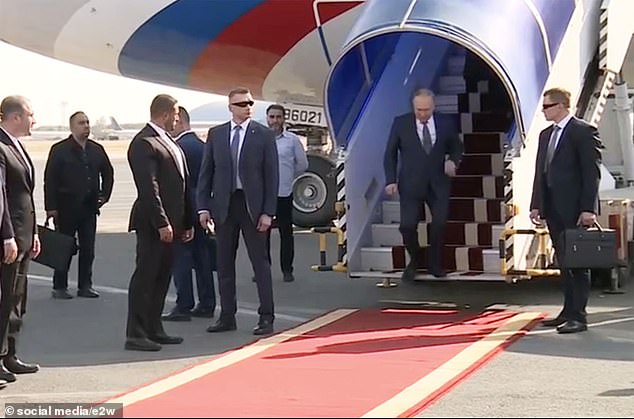 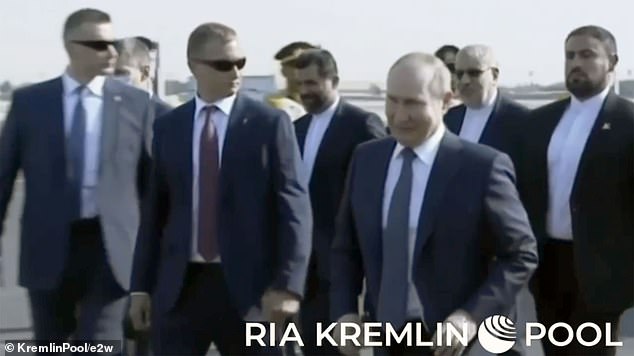 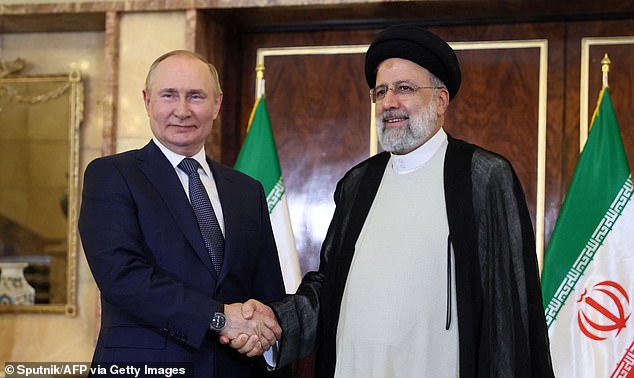 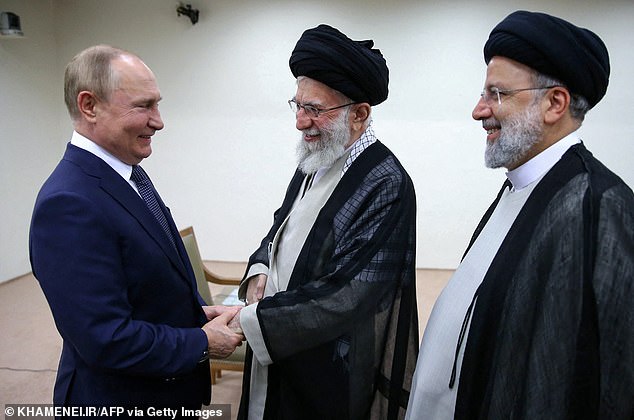 Putin is seeking to bolster ties with Tehran, a fellow target of US sanctions and a potential military and trade partner, and in addition to President Raisi meetx Iran’s Supreme Leader Ayatollah Ali Khamenei, with whom he has a ‘trusting dialogue,’ Putin’s foreign affairs adviser Yuri Ushakov said.

The Tehran trip also offers Putin a chance for a high-stakes meeting with Erdogan, who has sought to help broker talks on a peaceful settlement of the Russia-Ukraine conflict, as well as help negotiations to unblock Ukrainian grain through the Black Sea.

Erdogan’s Turkey is a member of NATO, the expansion of which Putin stands firmly against.

But the Turkish president has been vocal about his disapproval of the Nordic nations joining the security bloc and has historically maintained a strong relationship with the Russian leader – though this has waned in recent months amid the war in Ukraine and a planned deal between the US and Turkey for an upgrade of Turkey’s air force.