By EMMA JAMES and ALEX HAMMER FOR DAILYMAIL.COM and WALTER FINCH FOR MAILONLINE

Horrifying footage showed wave after wave pummel the small city, where an extreme wind warning is currently in effect, swallowing buildings and cars as the monster tempest finally made landfall on Wednesday.

It sees the ‘unsurvivable’ torrent of water engulf palm trees in the tropical resort and rip some from their roots as it was forced forwards by 155mph winds – only the fifth storm in history to hit land at that speed.

More than 1.3 million citizens are without power, as Governor Ron DeSantis warned citizens in an evening address that the worse may have yet to come.

‘This storm is doing a number on the state of Florida,’ the governor said, adding that citizens to expect the storm to move through the state today and ‘much of tomorrow.’

Fort Myers was one of the first cities to be battered by Ian, with apocalyptic images from after the initial surge showing homes decimated by its wrath as roads turned into rivers with the tsunami of floodwater.

Meanwhile Naples and Sanibel Island were also rocked by the ‘historic’ hurricane, with houses overwhelmed by water, debris flung through windows and some even ripped from their hinges by historic flooding.

Locals are reporting that hundreds of people in Naples are stranded on their rooftops, with the population of the town being made up mostly of elderly residents.

A mandatory curfew is now in effect for the city beginning at 10 pm Wednesday night, officials said, as local sheriffs reported that a number of people trapped in their homes and rooftops amid rising water levels. The curfew will expire Thursday morning at 6 am.

In nearby Martin County, the sheriff’s office confirmed one death, after recovering the body of 34-year-old construction worker Cody Dudek face down in the water near Palm City.

As the storm heads north toward central Florida, governors in Virginia and both North and South Carolina have declared a State of Emergency for their respective states in anticipation of damage to come.

The Florida governor, meanwhile, urged residents who decided to brave the storm to stay in their properties or emergency bunkers while the hurricane blasted the coastline and neared on Category 5.

It comes just days after Cuba was tormented by the vicious hurricane, which left millions of dollars of damage and at least two people dead.

Among the damage caused by Hurricane Ian in Florida today:

Ron DeSantis warned citizens in an evening address that the historic storm will likely worsen, as more than 1.3 million citizens have be left without power

Fort Myers has been swallowed by 18ft of storm surge as hotel guests are filming belongings floating out of the buildings, with an extreme wind warning currently in effect.

Power lines have also been captured sparking near homes from the Category 4 hurricane, as cars float to the surface of the water.

The western eyewall was as of Wednesday lunchtime battering Estero Blvd along the beach which show water rising as high as three stories.

Parts of Georgia and South Carolina also could see flooding rains and some coastal surge into Saturday.

Photos show the extent of the damage left in the ‘extremely dangerous’ hurricane’s wake as it makes its way north toward the Sunshine State – where meteorologists have warned that it should make landfall around 4pm.

The Florida Power and Light Company reported 17,255 outages across several counties in Florida, as DeSantis confirmed a million properties have been left without power.

DeSantis, who invoked a statewide state of emergency Sunday, has prepared 30,000 workers on standby to help once Florida’s power grid inevitably topples in Ian’s wrath.

Floridians were last night warned that it was their final chance to flee their homes before being forced to brace for Ian’s wrath.

Terrifying footage shows the coast being battered by high winds and homes and businesses flooded by more than two feet of water, as more extreme weather is yet to come. 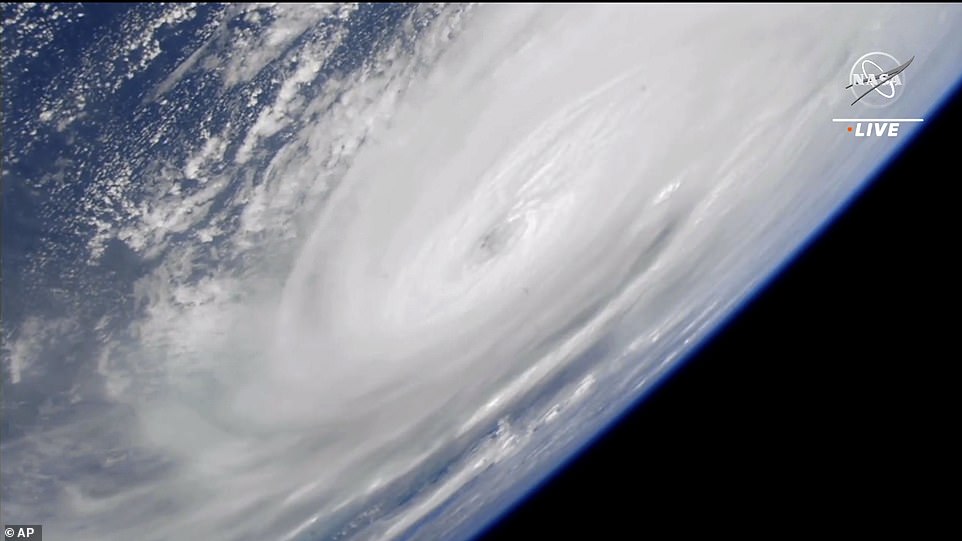 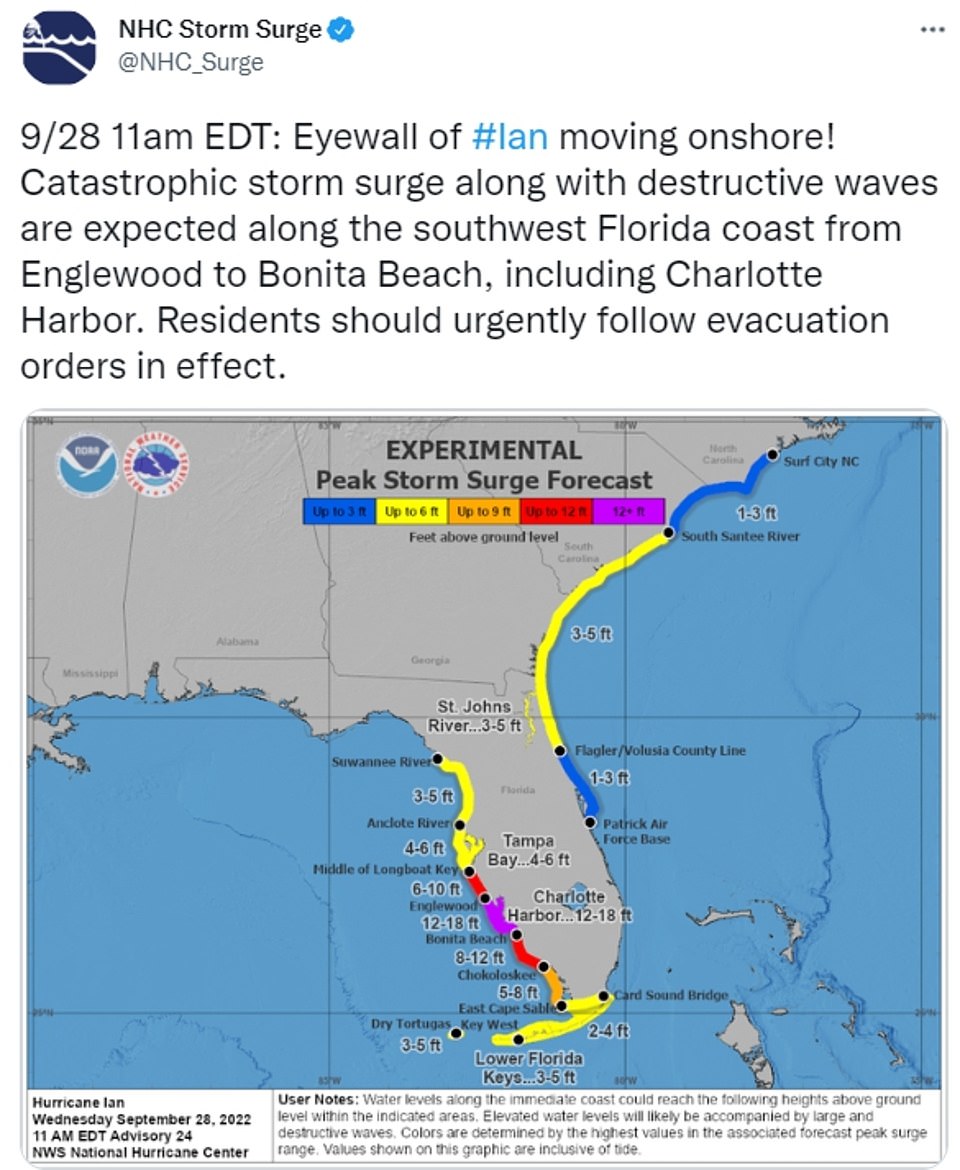 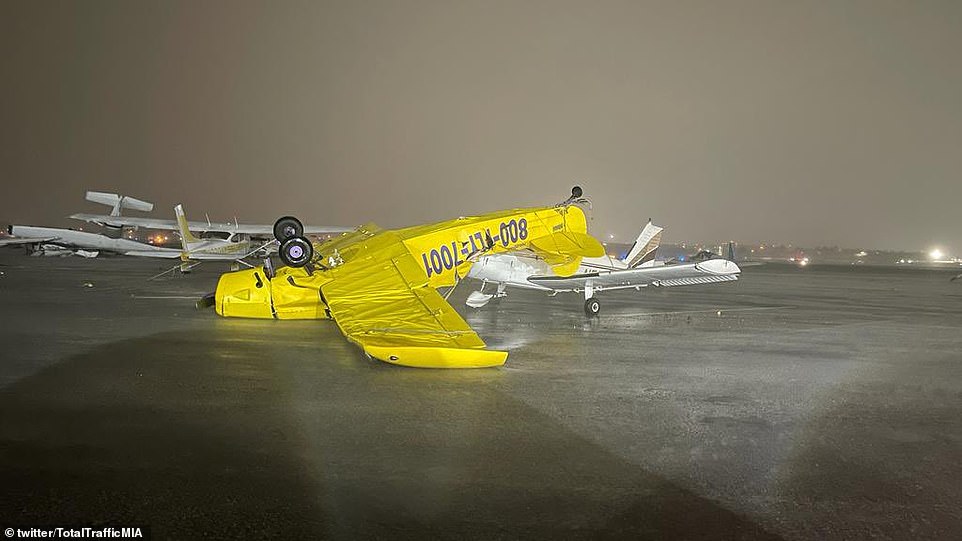 PEMBROKE PINES: Many planes were tipped upside down by the tornado, with more warnings in place throughout the day set to cause devastation