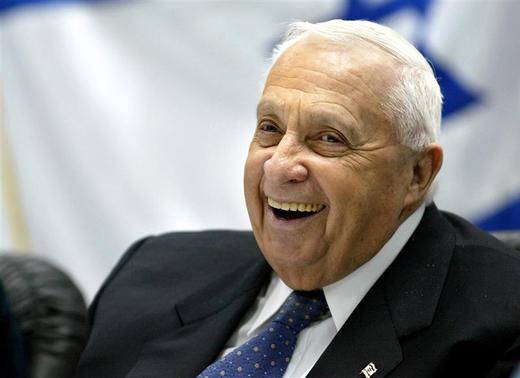 1 of 14. Israel’s Prime Minister Ariel Sharon smiles during a meeting with army and police forces at an army base near Jerusalem in this file picture taken January 5, 2005.

JERUSALEM (Reuters) – Former Israeli prime minister Ariel Sharon, the trailblazing warrior-statesman who stunned Arab foes with his dramatic turnarounds, died on Saturday aged 85, after eight years in a coma caused by a stroke.

Sharon left historic footprints on the Middle East through military invasion and Jewish settlement-building on occupied land the Palestinians seek for a state but also with a shock decision to withdraw from the Gaza Strip.

The United States and other foreign powers mourned Sharon as a peacemaker, noting his late pursuit of dialogue with the Palestinians. Those negotiations continue under Israeli Prime Minister Benjamin Netanyahu, though differences remain wide.

Sharon died at Sheba Medical Center, near Tel Aviv, where he had been in a coma since being hit by a stroke at the pinnacle of his power as prime minister in January 2006. His condition had declined steeply since the middle of last week.

“Arik was a valorous soldier and a bold statesman who contributed much to the security and building up of the State of Israel,” said President Shimon Peres, a former political ally of Sharon and, with the ex-premier’s death, the last of the Jewish state’s founders still in public life.

“Arik loved his people and his people loved him,” Peres said, using the nickname of Sharon, a famously burly and blunt figure with a prizefighter’s rolling gait.

“He knew no fear and never feared pursuing a vision.”

An Israeli official said Sharon’s remains would lie in state in parliament in Jerusalem on Sunday. A memorial service will be held there on Monday morning, followed by an afternoon funeral near Sycamore Farm, Sharon’s residence in southern Israel.

Palestinians accused Sharon of sparking their “Intifada” with a provocative visit to the al Aqsa mosque plaza in Jerusalem’s Old City in 2000, a year before he took power.

He further embittered them with a crushing army sweep of self-rule areas of the West Bank in 2002 after a wave of Palestinian suicide bombings and with his siege of Palestinian leader Yasser Arafat in his Ramallah compound.

But Sharon surprised many by withdrawing soldiers and settlers from Gaza in 2005 under a policy of “disengagement” from conflict and a pursuit of dialogue with the Palestinians.

The pullout, however, led to Gaza’s takeover by the Palestinian Hamas Islamists who, unlike the West Bank-based President Mahmoud Abbas, spurn co-existence with Israel.

As Sharon’s finance minister in 2005, Netanyahu quit in protest at the Gaza plan. Netanyahu now points to Hamas’s rise in balking at similar West Bank withdrawals sought by Abbas.

Mourning Sharon, Netanyahu emphasized his military, rather than political, exploits: “He was first and foremost a brave warrior and great strategist, among the greatest of Israel Defence Force commanders.”

Palestinians in Gaza were handing out sweets to passersby and motorists in celebration of Sharon’s passing.

“We have become more confident in victory with the departure of this tyrant (Sharon),” said Hamas spokesman Sami Abu Zuhri.

A lifelong rancher renowned for his big appetite, Sharon became known as “the Bulldozer”, in part for his headlong pursuit of hardline policies that included settlement expansion in territory Israel captured in the 1967 Middle East war.

As a young paratroop officer in the 1950s, he championed night-time reprisals – one of which killed dozens of civilians in the village of Qibya – for cross-border Arab guerrilla raids on the fledgling Israel.

He was widely hated by Arabs over the 1982 massacre of hundreds of Palestinian refugees in Beirut by Lebanese Christian militiamen allied to Israel.

An Israeli state inquiry found Sharon, who as defence minister engineered Israel’s 1982 invasion of Lebanon and war against Palestinian guerrillas there, indirectly responsible for the camp killings, and he was forced to resign his post.

“The Palestinian people remember what Sharon did and tried to do to our people and their dream of forming a state,” Wael Abu Youself, a senior member of Abbas’s umbrella Palestine Liberation Organisation, told Reuters.

“Despite the settlements and wars that he launched against us, here and in Lebanon and with the war crime of Sabra and Shatila (camps), Sharon has departed and the Palestinian people remain on their land.”

Sharon’s devastating illness struck shortly after he quit the right-wing Likud party and founded a centrist faction with the declared aim of advancing peace with the Palestinians, whose 2000-2005 uprising he had battled as prime minister.

Former U.S. president George W. Bush, a Republican, saw in Sharon’s strategy a reflection of his own “war on terror” and they formed a close alliance. On Saturday, appreciation for Sharon came from both sides of the U.S. political divide.

“We reaffirm our unshakable commitment to Israel’s security and our appreciation for the enduring friendship between our two countries,” said President Barack Obama, a Democrat.

“As Israel says goodbye to Prime Minister Sharon, we join with the Israeli people in honoring his commitment to his country,” Obama said.

British Prime Minister David Cameron called Sharon “one of the most significant figures in Israeli history”, saying he “took brave and controversial decisions in pursuit of peace”.

“Ariel Sharon … has been a major actor in the history of his country. After a long military and political career, he made the choice to turn towards dialogue with Palestinians,” French President Francois Hollande said in a statement.

Many Israelis will remember Sharon as a maverick military leader who fought in the 1948 war of Israel’s founding and went on to earn a reputation for trigger-happy disobedience, but also for battlefield bravery and brilliance.

Sharon’s nurse Marina Lifschitz said he had not suffered while lying comatose, though he had at times given basic responses to stimuli. She recalled at one point holding up a picture of his late wife Lily for him to view.

“And suddenly I saw a tear simply rolling out of his eye. That is very difficult to forget,” Lifschitz told reporters.

(Additional reporting by Nidal al-Mugrabi in Gaza, Ali Sawafta in Ramallah and Steve Holland in Washington; Editing by Andrew Roche and Gareth Jones)

What makes his death significant at this time, is the fact that Ultra-Orthdox Jews placed a Kabbalistic Curse on Sharon for dividing land and shortly after he fell into a coma.

So the next amazing thing about this story?

It is basically a prophecy uttered by Rabbi Kaduri about the Messiah. In 2007 Rabbi Kaduri died at 108 years old, but before he died he left a cryptic note revealing  the name of the  Messiah.  The note was revealed on Rabbi Kaduri’s website and the message claimed the Messiahs name was Yehoshua (Jesus).

Rabbi Kaduri even went further claiming that when Ariel Sharon dies that the Messiah will make his long awaited return.

The late Rabbi Yitzhak Kaduri said on his death bed that the Messiah had visited him, His name is Yahshua (Jesus Christ) and that He would return to Israel shortly after the death of Ariel Sharon

Below is a video of the prophecy

Photos of the week

Our top photos from the past week.  Slideshow