Kuchinoerabu island is evacuated after eruption on Friday morning

More than 100 people have been ordered to evacuate after a volcano erupted on the tiny southern Japanese island of Kuchinoerabu on Friday morning.

Japan’s meteorological agency raised the alert level to five – the highest on its scale – and ordered the island’s 140 residents to evacuate.

The agency said no injuries or damage had been reported following the eruption, which occurred eight months after 57 people died after Mount Ontake in central Japan erupted without warning.

The agency added that pyroclastic flows, dense currents of rock fragments and hot gases from the volcano had reached the island’s north-west shore.

In Tokyo, the prime minister, Shinzo Abe, set up an emergency response team and dispatched a self-defence forces to the island. Abe said he had instructed local authorities to do “everything possible” to ensure the islanders’ safety.

A local official said the eruption, which occurred without warning, had forced about 100 people to take shelter at an evacuation centre. “There was a really loud sound of an explosion, and then black smoke rose, darkening the sky,” Nobuaki Hayashi told the national broadcaster NHK. “It smells of sulphur.”

Hayashi said several people were yet to be accounted for, and others had yet to reach the evacuation shelter because they were travelling by boat. “The skies here are blue, but smoke is still rising to the west,” he said.

Photographs by Twitter user @TAKUYAbluewhale, who was on the nearby island of Yakushima, show a huge plume of smoke rising nine kilometres into the sky. “The eruption happened right before my eyes,” he said. “The seismic force of the eruption was incredible. 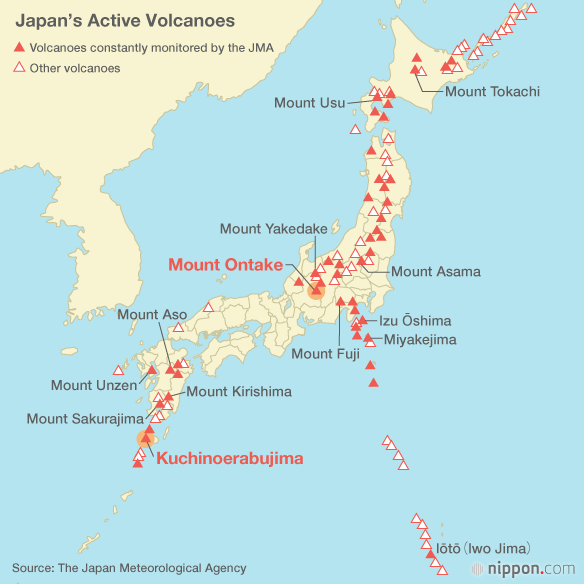 The manager of a guesthouse on the island told Kyodo News the sound of the blast was “tremendous”, adding that she had immediately taken shelter.

Kuchinoerabu island is located about 80km (50 miles) south-west of the main island of Kyushu, and can be reached only by a once-a-day ferry from Yakushima island, 19km (12 miles) to the east.

Residents live with the constant threat of a volcanic eruption; Mount Shindake, located about 650 metres above sea level, erupted in August 2014 for the first time since 1980.

Friday’s eruption occurred just before 10am local time, the meteorological agency said, adding it had previously imposed restrictions on climbing in the area.

Authorities in Japan, which is dotted with active volcanoes, are taking a more cautious approach following criticism that they had failed to warn hikers of increased volcanic activity before the Ontake tragedy last September.

They recently closed part of a popular hot spring resort about 80 kilometers from Tokyo amid fears that nearby Mount Hakone could erupt.