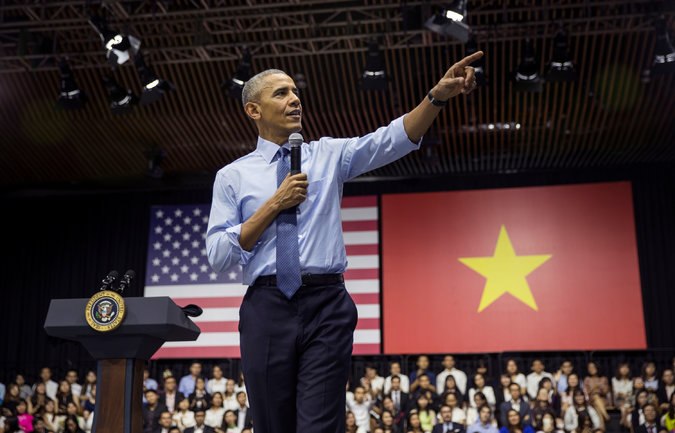 U.S. President Obama on Monday lifted a half-century ban on selling arms to Vietnam, a move that is raising concerns among some Vietnam War veterans.

“At this stage, both sides have established a level of trust and cooperation, including between our militaries, that is reflective of common interests and mutual respect,” said Mr. Obama in Hanoi during his first visit to the country. “This change will ensure that Vietnam has access to the equipment it needs to defend itself and removes a lingering vestige of the Cold War.”

He said every U.S. arms sale would be reviewed case by case to take into account Vietnam’s human-rights record.

“And now we are comprehensive partners,” he said.

More than 58,200 U.S. soldiers were killed in Vietnam before the fall of Saigon in 1975. But the administration saw advantages in easing the embargo, both as a warning to expansionist China and as leverage to compel the communist regime in Hanoi to improve its record on human rights.

“We are thinking through how our evolving security cooperation [is] going to look moving forward,” said White House Deputy National Security Adviser Ben Rhodes prior to the visit. “They regularly raise this issue with us. We are looking at, of course, how our broader relationship is evolving, including our continued commitment to support human rights inVietnam.”

The notion of selling more lethal weaponry to Vietnam is a bitter irony to some veterans of the war and to some Vietnamese-Americans who fled the communists.

“They are still a communist country,” said retired Army Maj. Wulf Linden, a Georgia resident who served two tours in Vietnam. “If it’s the cream of our crop [of weapons systems], obviously that would be a bad mistake. It would be nice if we’re not selling to a regime that’s a documented communist regime. That’s my concern.”

Army veteran Ralph Riccio, a Pennsylvania resident who served in Vietnam in 1968 and 1969, said he has mixed feelings about the potential arms sales.

But he noted other examples of the U.S. embracing former wartime adversaries, such as Germany and Japan after World War II.

“I understand that one day somebody’s an enemy and the next day they’re not that much of an enemy,” he said.

Joe Frank, a former national commander of the American Legion and an Army veteran who lost the use of his legs to a land mine in Vietnam, said he never dreamed in the late 1960s that the U.S. would one day seek a closer alliance with Hanoi. But he said he accepts the politics of the move.

“I lost a lot of friends in Vietnam. They’re on that black granite wall [the Vietnam Veterans Memorial in Washington],” Mr. Frank said. “A soldier like me, just like the Vietnamese, we were just taking our orders from those up above. This [arms sales] is politics. It doesn’t bother me as long as long as this is well-researched.”

Beefing up Vietnam’s defenses is a crucial step for the Obama administration in standing up to China’s military influence, said James Zumwalt, a retired Marine infantry officer who served in Vietnam and has written extensively about Southeast Asia.

“I am not an Obama fan,” Mr. Zumwalt said. “But this is one of the few things they’ve done in the foreign policy area that I totally agree with.”

He said the administration must do more to confront China over its territorial claims in the South China Sea, a region of major shipping lanes and energy deposits where Beijing has been building artificial islands.

“China will try to do anything and everything they can in the remaining 200-some days that Obama’s in office to establish themselves in the South China Sea,” Mr. Zumwalt said. “That’s why I think it is absolutely imperative that Obama show some backbone and take this step and do it in a way that leaves no doubt in the minds of the Chinese that we’re upset with what they’ve done. We’ve let China get away with so much, this is kind of an inexpensive way of conveying a message to China.”

Mr. Obama said his decision to lift the ban on arms sales “was not based on China,” although he added that he wants to help Vietnam “improve their maritime security posture.”

Officially known as the Socialist Republic of Vietnam (SRV; Vietnam is the easternmost country on the Indochina Peninsula in Southeast Asia. With an estimated 90.5 million inhabitants as of 2014, it is the world’s 14th-most-populous country, and the eighth-most-populous Asian country. Vietnam is bordered by China to the north, Laos to the northwest, Cambodia to the southwest, and Malaysia across the South China Sea to the southeast.

It should worry more than the Veterans