On June 6th, a group from the Satanic Temple in Los Angeles will use GPS technology to construct a giant pentagram around the city of Lancaster, which is located in northern Los Angeles County.

The goal is to “raise awareness” for Satanism, and it looks like this event has already accomplished that goal.  Of course this particular date was chosen because it corresponds closely to “666” and the Mark of the Beast that we read about in the Book of Revelation, and therefore this little group of Satanists will receive some unusual media attention this week.  But as you will see below, there are other things that we should be far more concerned about than this.

But first let’s address this giant pentagram that is going to be constructed in southern California.  The following details come from the website of the Satanic Temple in Los Angeles via L.A. Weekly…

The Pentagram is a star with five points. Using GPS technology we will place the five points of the star so that the Pentagram will encompass your entire city. When all of the points are in place, the Pentagram is completed. Drawing this symbol around your city represents a solemn promise from us, the Satanic Temple of Los Angeles. We will stand with the good people of the City of Lancaster and struggle for our constitutional right to individual liberty, freedom of expression and the separation of church and state in your community.

A lot of people are going to get upset about this, and that is quite understandable.

But in the end, we have got to realize that we are not a Christian nation any longer and we have not been one for a very long time.  Today, there are a multitude of religious organizations vying for our attention, and Bible-believing Christians are just one of them.  I like what Paul McGuire had to say on this matter…

Currently in America there is intense competition among various belief systems, religions, philosophies, and ideologies. This competition is expressed openly as different groups and faiths seek to promote their belief systems and win converts to their religion or cause. We live in a free market place of ideas, and various religions like Christianity, Judaism, Islam, Mormonism, Scientology, Hinduism, Buddhism, Satanism, Wicca, and others are free to “evangelize,” even though many of these religions would say that they do not believe in evangelism. Wicca, along with witchcraft and paganism, is currently the fastest growing religion in America. Islam is also a fast growing religion. Christianity, and specifically Evangelical Christianity, is declining faster than most people realize.

The reason why so many of these other religions are winning in America is because Christianity is losing ground.

As millions of Americans turn away from the Christian faith, they are seeking to fill the spiritual voids in their hearts in other ways.  If we want to change that, we need to start representing Jesus Christ much better, and we need to let our light shine much brighter than we ever have before.

I wrote a major article about the decline of Christianity in America just the other day, and it has been a major theme in my writing for years.  The lukewarm, “me-centered” gospel that most churches are preaching today is not going to cut it any longer.  We are moving into a time when our world will be shaken like never before, and global events are going to seem like they are spinning out of control.  Millions of people are going to be searching for answers, and the number one topic that they are going to be interested in is Bible prophecy.  They are going to want to know if the Bible has anything to say about why our planet has gone completely nuts.  This is one of the reasons why I wrote my new book and why I recorded a four part teaching series on the last days down at Morningside recently.  If you have not gotten a chance to see it yet, you can view the first part right here.

The 9th and 10th floods in this series just happened within the last few days.  First of all, on Sunday extremely heavy rains caused horrible flooding in parts of Texas and Kansas…

Six people died and at least two others were missing Sunday after heavy rains in Texas and Kansas caused severe flooding. In one case near Austin, which received nine inches of rain this week, a vehicle with two people was swept off a flooded roadway.

Threats of floods prompted authorities to evacuate thousands of prisoners near Houston, and inmates in another prison on Saturday fought with correctional officers after flooding caused a power outage.

The South Carolina Department of Transportation said I-95 Southbound at the U.S. 17 exit, about 22 miles north of the Georgia border, was blocked because of water on the road. Traffic was also partially blocked in the northbound lanes.

It would be hard to accurately describe just how bad things were in some parts of the state.  At one point, it was being reported that traffic on Interstate 95 was backed up for more than 35 miles and large stretches of the highway were completely underwater… 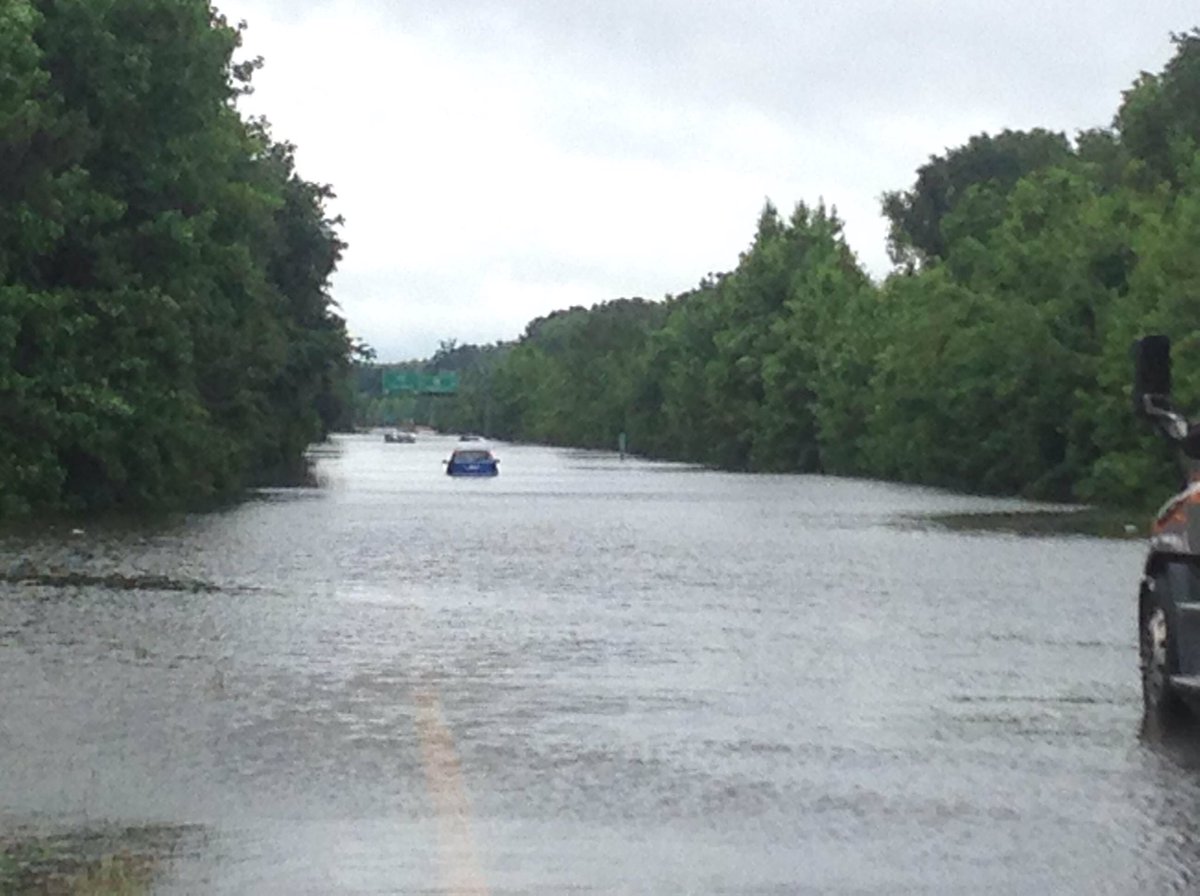 So now we can add these two to the eight other major flooding events that have taken place over the past eight months.

In case you haven’t been following my work on a regular basis, here in the list…

October: Hurricane Joaquin never makes landfall, but it tracks up the east coast of the United States causing nightmarish rainfall and flooding all over the eastern seaboard.  Things were particularly bad in South Carolina, where the governor declared that it was the worst rainfall that many areas of her state had seen in 1,000 years.

October: Violent storms in southern California caused flash flooding that buried some highways in “rivers of mud” that were up to six feet deep.  Hundreds of vehicles got buried in the fast moving mud, and the lifeless body of one man that had his vehicle completely encased by several feet of mud was recovered only after a few days had passed because that is how long it took emergency workers to dig him out.

October: Hurricane Patricia was the second most intense tropical cyclone ever recorded in the entire world, and remnants from that storm caused absolutely horrible flooding in some parts of Texas.  The flood waters were moving so fast at one point that a freight train was actually knocked entirely off the tracks.

November-December: A “conveyor belt” of violent storms barreled into coastal areas of Oregon and Washington causing nightmarish flooding in many areas.  The resulting landslides and floods made headlines all over the country, and it is going to be a long time before the region fully recovers.  In early December we witnessed the wettest day in the history of Portland, Oregon, and things were also extremely bad at that time up in the Seattle area.

January: The middle part of the country experienced record-breaking floodingas the calendar rolled over from 2015 to 2016.  The only thing that people could really compare it to was the great flood of 1993, and Missouri Governor Jay Nixon said that some communities saw floodwaters get to “places they’ve never been before”.  Normally, if the middle of the country is going to see flooding like this it is going to take place when the snow begins to thaw in the spring.  For something like this to happen in the middle of the winter was absolutely unprecedented.

January: On January 22nd, one of the worst east coast blizzards in history slammed into Washington D.C., New York City and other major metropolitan areas.  More than three feet of snow was dumped on some areas, hundreds of thousands of people were left without power, and coastal cities all long the eastern seaboard experienced flooding that was described as “worse than Hurricane Sandy“.  It is also interesting to note that this storm was known as “Jonas”, which is actually a Greek transliteration of the Hebrew name “Jonah”.  Jonah, of course, was a Hebrew prophet that was sent to the capital city of Assyria (Ninevah) to warn that the judgment of God was coming.  Well, it turns out that this storm called Jonas also hit our capital city (Washington D.C.) on the exact anniversary of Roe v. Wade and in the exact location where Roe v. Wade was decided.

March: Almost two feet of rain triggered historic flooding in parts of Texas, Louisiana and Mississippi.  Flooding along one area of the Sabine River broke the previous record by more than five feet, and some sections of Interstate 10 were closed for four days.

April: City officials in Houston declared that the flooding that struck that city was “a life-threatening emergency“, and substantial sections of Interstate 10 and Interstate 45 near downtown were fully underwater.  Authorities admitted that water was getting to areas that it had never been before, and Fire Department spokesman Jay Evans said that the water was 10 to 15 feet deep in some areas.

In addition, let us also remember that 2015 was the worst year for wildfires in all of U.S. history, and right at this moment we are more than a million acres ahead of the pace set last year.

So no, we don’t need a bunch of Satanists to curse us, because we are already cursed.  We have killed more than 58 million babies since Roe v. Wade was decided in 1973, there are 20 million new STD cases in the United States each year, the suicide rate in this country has spiked to the highest level in almost 30 years, and most of our churches have already gone completely apostate.

If you want to get upset about what a small group of Satanists is doing out in southern California, I completely understand.

But in the end, we have problems that are far, far greater than that, don’t you think?