By MATT HUNTER FOR MAILONLINE and JENNY STANTON IN NEW YORK and JOSE LAMBIET IN FORT PIERCE, FLORIDA FOR DAILYMAIL.COM

Shooter Omar Mateen (pictured), 29, from Port St. Lucie in Florida, opened fire at Pulse night club in the early hours of this morning

The Islamic State has claimed responsibility for the Orlando gay club massacre and says the gunman that slaughtered at least 50 people was one of its fighters.

Shooter Omar Mateen, 29, from Port St. Lucie in Florida, opened fire at Pulse night club in the early hours of this morning.

At least 50 people were killed and 53 others were injured in the deadliest mass shooting in US history and the first time ISIS has claimed responsibility for an attack on US soil.

In total, 39 people were killed inside the club, two outside, and nine others died after being rushed to hospital.

A surgeon at Orlando Regional Medical Center said the death toll was likely to climb.

Islamic State’s Amaq news agency said on Sunday that the Islamist militant group was responsible for the shooting.

‘The armed attack that targeted a gay night club in the city of Orlando in the American state of Florida which left over 100 people dead or injured was carried out by an Islamic State fighter,’ Amaq said.

U.S. officials cautioned, however, that they had no immediate evidence of any direct connection with Islamic State or any other foreign extremist group, nor had they uncovered any contacts between the gunman and any such group.

During the attack, Mateen also referenced the brothers who carried out the 2013 Boston Marathon bombing, a Massachusetts State Police spokesman said on Sunday.

‘During a conference call with federal law enforcement officials a short time ago, Massachusetts State Police and other local law enforcement authorities learned that the Orlando nightclub gunman, during his rampage, pledged allegiance to ISIS and referenced the Tsarnaev brothers,’ state police spokesman David Procopio said in an e-mail.

The Tsarnaev brothers killed three people and injured more than 260 in the April 15, 2013, attack. Tamerlan Tsarnaev, 26, died four days later during a gunbattle with police while Dzhokhar Tsaranev, now 22, has been sentenced to death for his role in the attack.

‘This has nothing to do with religion,’ he said. ‘We are saying we are apologizing for the whole incident. We weren’t aware of any action he is taking. We are in shock like the whole country.’

This afternoon, the first victims of the massacre were identified. Stanley Almodovar III, who lived in Clermont, Florida, and Edward Sotomayor Jr of Sarasota, Florida, were killed in the shooting.

Pictured: US citizen Omar Mateen, 29, the suspected Islamic extremist who slaughtered at least 50 people inside a gay club in Orlando

In the hours after the deadliest shooting in American history, a preliminary sketch of the perpetrator emerged. According to the FBI, he had claimed allegiance to the Islamic State. Reportedly, he had been enraged by seeing gay men in public. 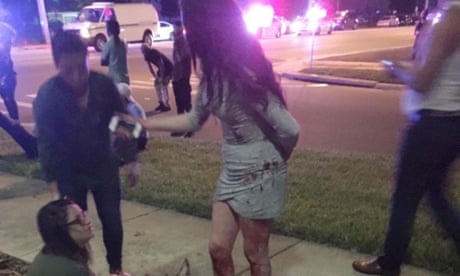 ‘Everyone get out and keep running’: how the Orlando attack unfolded

Omar Mateen, a 29-year-old man from Florida’s Treasure Coast, killed 50 people at an LGBT nightclub in Orlando, starting at about 2am on Sunday, and was killed by police after a three-hour standoff. Mateen was a US citizen, born in New York to parents who had immigrated from Afghanistan.

The shooting left 53 injured, according to police.

The security firm G4S confirmed in a statement on Sunday that it had employed Mateen since September 2007.

The FBI agent Ron Hopper said on Sunday afternoon that Mateen had a history with the agency. Agents first became aware of Mateen in 2013, after he made inflammatory statements to co-workers about affiliations with a terror group.

The FBI interviewed him twice, Hopper said, but could not substantiate any connection to terrorists.

In 2014, Hopper said, the FBI interviewed Mateen again because of a connection to a suicide bomber. But, he said, “contact was minimal” and Mateen was released.

Despite those interactions, according to state records, Mateen held licenses to work as a security guard and carry a firearm in Florida. A spokesman for the Bureau of Alcohol, Tobacco and Firearms said Mateen had purchased the weapons he used in the Orlando shooting within the past week.

Just before the shooting, Hopper said, Mateen declared in a 911 call his allegiance “in general to the Islamic State”.

Earlier, the Florida senator Bill Nelson said: “Obviously he knew what he was doing. I asked the FBI if there was any connection to Isis. There appears to be. But they are naturally cautious and waiting throughout to see if this [is the case] as the facts emerge. I have checked with intelligence staff, and they do believe that there is some link to Isis.

Islamic Holy Month Of Terror Begins – After ISIS Calls For Lone Wolf Attacks In U.S. During Ramadan, Dozens Massacred In Florida As Supporter Heeds The Call

The war is on, but on previously unimagined levels!

By Susan Duclos – All News PipeLine

In September 2015 Stefan Stanford provided a list of 190 locations to which the Obama administration had secretly chosen to import Syrian refugees and in November of that year ANP provided a map and a list of 138 cities in 36 states where refugees have already been settled….. one of which was Orlando, Florida, the location of the most recent terrorist massacre.

In late May ISIS spokesman Abu Mohammed al-Adnani demanded supporters carry out “lone wolf” attacks in the west during the Islamic holy month of Ramadan which started June 5 and ends on July 5, 2016,  if they were unable to travel to the self-declared Caliphate in Syria and Iraq, according to Reuters at the time.

“Ramadan, the month of conquest and jihad. Get prepared, be ready … to make it a month of calamity everywhere for the non-believers … especially for the fighters and supporters of the Caliphate in Europe and America,µ said the audio message, urging ISIS sympathizers in the West to attack if they cannot travel to the group’s self-declared Caliphate in Syria and Iraq, Reuters reports.

“The smallest action you do in their heartland is better and more enduring to us than what you would if you were with us. If one of you hoped to reach the Islamic State, we wish we were in your place to punish the Crusaders day and night,µ the message reportedly added.

ISIS encouraged its supporters to launch lone wolf attacks “to win the great award of martyrdom.µ

It appears that call has been heeded as overnight a radical “Islamic Extremist” carried out one of those lone wolf attacks at a nightclub called The Pulse in Orlando Florida, killing up to 20 people , UPDATED more than 50 now reported dead according to USA Today , who calls this the “most deadly shooting spree in U.S. history.”

The gunman, who was born to Afghan parents, was carrying a suspicious device, possibly a suicide vest, when he opened fire on the dance floor inside Pulse in the early hours of this morning.

Orlando Police Chief John Mina said authorities have not determined the exact number of people killed, but that ‘approximately 20’ have died. Another 42 people were taken to hospital.

An FBI spokesman said the mass shooting is being investigated as an act of terrorism, adding that they are looking into whether this was an act of domestic or international terror, and if the shooter was a lone wolf.

Police said the gunman, who was shot dead by officers, was believed to be in his 20s, while the FBI believe he may have ‘leanings to radical Islamic terrorism’.

Video below, shot after shot can be heard in the raw footage below. Beneath that is a press conference where authorities detail the massacre.

Jim Hoft over at Gateway Pundit has already taken screen shots from ISIS suppoirters celebrating the Pulse attack and warning of more attacks on disbelievers.

As the San Bernardino, CA. massacre proved without a doubt, ISIS supporters are already in America, coming through with Visas,being brought in by the Obama administration hiding within the refugees, as well as being smuggled in across the borders by Mexican cartels.

When GOP presumptive nominee for president Donald Trump called for a temporary suspension of bringing Muslims into America he was highly criticized, but when we consider that according to surveys 51 percent of Muslims in the U.S. want Sharia law versus the U.S. legal system and 25 percent believe “It is legitimate to use violence to punish those who give offense to Islam,”  one can no longer deny that there are a significant amount of radical Islamic sympathizers within the U.S. that find using violence is acceptable against Americans.

Does anyone truly believe that a “lone wolf” committed a massacre during Ramadan, in a city where Obama has imported so-called refugees, less than a month after ISIS called for lone wolf attacks during Ramadan……. and it is a coincidence?

How many other lone wolf attackers are out there, planning the same type of attacks? What city is next?

Note – Thse lists may not even be complete because the Obama administration has since refused to provide state governors with information on refugees being settled in their states. Instead he blaming the gun laws.

Keep your heads up, eyes and ears open folks…. the next attack could come from anywhere during this Islamic Month of Terror that ISIS has called for. The war is on.

Worst US mass shootings in the last 25 years

Orlando Police Chief John Mina said the attack began at 02:00 (06:00 GMT). There was an exchange of fire with a police officer working at the club, after which the suspect took hostages.

Chief Mina said a decision was taken at 05:00 to send a police assault team into the club after police received text messages and phone calls from some of the hostages.

According to the Mass Shooting Tracker, the US last year suffered 372 mass shootings, defined as a single incident that kills or injures four or more people. Some 475 people were killed and 1,870 wounded.

The latest incident came as Orlando was still reeling from the fatal shooting on Friday night of 22-year-old singer Christina Grimmie following a concert in the city.