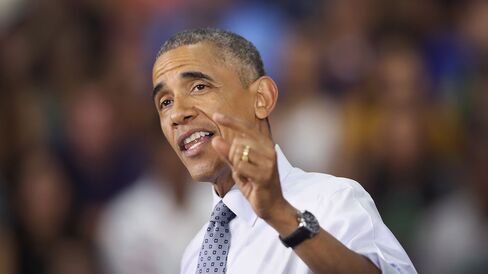 The White House is leaning on companies to commit money and other assistance to resettlement programs ahead of a Sept. 20 summit President Barack Obama will host at the United Nations. Other companies participating in the effort include MasterCard Inc., United Parcel Service Inc., HP Inc., and IBM, according to a document obtained by Bloomberg News.

Obama has said the U.S. will admit 10,000 Syrian refugees by the end of September, a pledge that’s become a flashpoint in the 2016 presidential campaign. Presumptive Republican nominee Donald Trump has said the refugees present a threat to U.S. security and should not be allowed entry.

Presumptive Democratic nominee Hillary Clinton has said she would admit even more, if she is elected.

The government says it only considers resettling the most vulnerable refugees, such as widows, orphaned children, and people whose lives have been threatened by Syrian President Bashar al-Assad’s regime. Refugees go through an extensive screening process that has significantly slowed their entry to the U.S., with only 5,000 approved for resettlement so far, Homeland Security Secretary Jeh Johnson told Congress on Thursday.

Obama has denounced Trump’s position, without using the candidate’s name.

“When refugees escape barrel bombs and torture, and migrants cross deserts and seas seeking a better life, we cannot simply look the other way,” the president said Wednesday in a speech to the Canadian Parliament in Ottawa. “We certainly can’t label as possible terrorists vulnerable people who are fleeing terrorists.”

Concern about the flood of Middle Eastern and African refugees entering Europe is also thought to have played a significant role in last week’s vote by British citizens to exit the European Union. Leaders across the continent have struggled to respond to the worst refugee crisis since World War II, facing stretched budgets and tough politics.

Obama is hoping that in the U.S., the private sector can help shoulder at least some of that burden.

The companies working with the administration have pledged to fund programs that assist refugees and aid workers directly. Airbnb Inc., for example, will donate credits for relief workers to book housing through its site.

Goldman Sachs, which has already contributed $4.5 million in response to the crisis, says it will underwrite programs to help refugees learn English and gain employment skills. Alphabet’s Google will provide consulting and technology to nonprofits the company says will help more than 1 million refugees worldwide access information and education this year.

“We are thrilled to be part of this partnership, and to see the White House’s continued leadership in this area,” Roya Soleimani, a spokeswoman for Google, said in an e-mail.

The corporate commitments may give Obama some leverage as he pushes other countries to increase their refugee commitments by this fall. Samantha Power, the U.S. ambassador to the UN, said on a conference call Thursday that the UN received just $11 billion of $20 billion it requested for refugee assistance in 2015, forcing the organization to cut rations of food and medicine. Out of 1.2 million refugees that need to be resettled, the UN High Commissioner for Refugees has only found homes for 110,000, Power said.“That’s just not enough,” she said.

Obama is expected to begin lobbying for increased refugee aid in person next week at a NATO summit in Warsaw. According to the White House, he wants to increase global financing for refugees by 30 percent, double the amount spent to resettle refugees,