by Tyler Durden Sep 14, 2016 9:35 PM Submitted by Susan Warner via The Gatestone Institute,

For many Venezuelans, by every economic, social and political measure, their nation is unravelling at breakneck speed.

Severe shortages of food, clean water, electricity, medicines and hospital supplies punctuate a dire scenario of crime-ridden streets in the impoverished neighborhoods of this nearly failed OPEC state, which at one time claimed to be the most prosperous nation in Latin America.

Today, a once comfortable middle-class Venezuelan father is scrambling desperately to find his family’s next meal — sometimes hunting through garbage for salvageable food. The unfortunate 75% majority of Venezuelans already suffering extreme poverty are reportedly verging on starvation.

Darkness is falling on Hugo Chavez’s once-famous “Bolivarian revolution” that some policy experts, only a short time ago, thought would never end.

In a 2007 study on the Chavez years for the Washington, DC-based Center for Economic and Policy Research, Mark Weisbrot and Luis Sandoval wrote:

“[a]t present it does not appear that the current economic expansion is about to end any time in the near future. The gains in poverty reduction, employment, education and health care that have occurred in the last few years are likely to continue along with the expansion.”

While it was not so long ago that many people heralded Venezuela as Latin America’s successful utopian Socialist experiment, something has gone dreadfully wrong as the revolution’s Marxist founder, Hugo Chavez, turned his Chavismo dream into an economic nightmare of unimaginable proportions.

The question of whether Socialism can be an effective economic system was famously raised when Margaret Thatcher said of the British Labor Party:

“I think they’ve made the biggest financial mess that any government’s ever made in this country for a very long time, and Socialist governments traditionally do make a financial mess. They always run out of other people’s money. It’s quite a characteristic of them. They then start to nationalise everything, and people just do not like more and more nationalisation, and they’re now trying to control everything by other means.”

In short: “The trouble with Socialism is that eventually you run out of other people’s money.”

When President Nicolas Maduro inherited the Venezuelan Socialist “dream”, in April of 2013, just one month after Chavez died, he was facing a mere 53% inflation rate. Today the Venezuelan bolivar is virtually worthless, and inflation is creeping to 500% with expectations of much more. A recent Washington Post report stated:

” …markets expect Venezuela to default on its debt in the very near future. The country is basically bankrupt. It is not easy for a nation to go bankrupt with the largest oil reserves in the world, but Venezuela has managed it. How? Well, a combination of bad luck and worse policies. The first step was when Hugo Chávez’s socialist government started spending more money on the poor, with everything from two-cent gasoline to free housing. That may all seem like it’s a good idea in general — but only as long as there’s money to spend. And by 2005 or so, Venezuela didn’t have any.”

Chavez had the good fortune to die just before the grim reaper showed up on Venezuela’s doorstep.According to policy specialist Jose Cardenas:

“What began as a war against the ‘squalid’ oligarchy in order to build what he called ’21st-century socialism’ — cheered on as he was by many leftists from abroad — has collapsed into an unprecedented heap of misery and conflict.”

Maduro is doubling down on the failed Chavismo economic and social policies that have contributed to aninflationary crisis not seen since the days of the 1920’s Weimar Republic in Germany, when the cost of a loaf of bread was a wheelbarrow full of cash.

Demonstrations and public cries for food are the unpleasant evidence of a once-prosperous society being torn apart by the very largess that marked its utopian ideals less than a decade ago.

There are dire reports of people waiting in supermarket lines all day, only to discover that expected food deliveries never arrived and the shelves are empty.

In desperation, some middle class families have organized online barter clubs as helpless citizens seek to trade anything for diapers and baby food, powdered milk, medicines, toilet paper and other essentials missing from store shelves or available only on the black market for double and triple already impossibly inflated prices..

As things continue to worsen, President Maduro, unfortunately, is doubling down on the proven failed policies and philosophies of “Bolivarian Socialism,” while diverting attention away from the crisis — pointing fingers at so-called “enemies” of Venezuela such as the United States, Saudi Arabia and others.

Efforts to convince Maduro to enlist help from outside have failed, according to a report in the Catholic magazine,Crux:

Maduro has refused to accept help from international charitable organizations, including the Vatican-sponsored Caritas Internationalis, which through different affiliates has tried to send medicine and food.

“Denying that there’s a crisis and refusing to let the world send medicine and food is not possible,” said Cardinal Jorge Urosa Savino, archbishop of Caracas.

The prelate believes that Maduro is refusing to accept help in an attempt to hide the “very grave situation of total shortage,” which far from improving, he said, continues to deteriorate.

“The Venezuelan Episcopal Conference, the organization of the nation’s Catholic bishops, issued a scathing statement condemning president Maduro for giving the military full control of the nation’s food supply, accusing him of being at the helm of a devastating “moral crisis” and crippling every aspect of life in Venezuela.”

In what some economists have been calling a “death spiral”, the government’s failed economic policies are at the same time causing and trying to stem a runaway inflation with price-fixing policies which, in turn, are triggering shortages. Maduro is strongly urging businesses and farmers to sell their goods at severe losses, forcing shut-downs when the cost of doing business becomes prohibitive.

According to a recent Bloomberg report, the black market is thriving because goods are unavailable at prices fixed by the government. There are reports of ordinary people quitting inadequate-paying jobs to set up black market operations, hoping to be able to make enough to sustain life.

A dozen eggs was last reported to cost $150, and the International Monetary Fund “predicts that inflation in Venezuela will hit 720% this year. That might be an optimistic assessment, according to some local economic analysts, who expect the rate to reach as high as 1,200%.”

According to a Bloomberg report from April:

“In a tale that highlights the chaos of unbridled inflation, Venezuela is scrambling to print new bills fast enough to keep up with the torrid pace of price increases. Most of the cash, like nearly everything else in the oil-exporting country, is imported. And with hard currency reserves sinking to critically low levels, the central bank is doling out payments so slowly to foreign providers that they are foregoing further business.

“Venezuela, in other words, is now so broke that it may not have enough money to pay for its money.”

In the midst of this galloping cataclysm, there is no shortage of pundits who simplistically assert that the catastrophe is caused solely by the international collapse of oil prices. However, according to Justin Fox at Bloomberg:

“The divergence between Venezuela’s revenue and spending started long before (the 2014) oil-price collapse. When oil prices hit their all-time high in July 2008, government revenue — 40 percent of whichcomes directly from oil — was already falling. The main problem was Venezuelan oil production, which dropped from 3.3 million barrels a day in 2006 to 2.7 million in 2011. It was still at 2.7 million in 2014, according to the latest BP Statistical Review of World Energy.”

“Venezuela isn’t running out of oil. Its proven reserves have skyrocketed since 2000 as geologists have learned more about the heavy crude of the Orinoco Belt. But getting at that oil will take a lot of resources and expertise, both things that Venezuela’s state-owned oil company, Petroleos de Venezuela (PDVSA, best known in the U.S. for its Citgo subsidiary), has been lacking in since Chavez initiated a sort of hostile takeover starting in the early 2000s. First he kicked out 18,000 workers and executives, 40 percent of the company’s workforce, after a strike. Then he started demanding control of PDVSA’s joint ventures with foreign oil companies. One could interpret this in the most Chavez-friendly way possible — he was aiming for a more just allocation of his nation’s resources — and still conclude that he made it harder for PDVSA to deliver the necessary tax revenue.”

Cronyism and corruption prevailed under Chavez when oil was selling at almost $200 a barrel — at a time when Venezuela could have put some money away for the inevitable rainy day. But President Hugo Chavez and successor president Maduro, were busy buying votes and consolidating power with free giveaways, according to Michael Klare in The Nation.

Behind the doom and gloom Venezuela’s collapse is the continuing specter of street crime and murder, according to Time.com in a May 2016 report:

“The country’s runaway murder rate is just one of the factors driving opposition to President Nicolas Maduro in a country where shortages of food and basic goods are chronic, inflation is running rampant and the government is jailing political prisoners. But it serves as a bloody illustration of just how close to outright societal collapse Venezuela has come since the end of the 20th century, as gangs, guerrillas and militia defend their turfs and traditional authority structures fall by the wayside.”

Venezuela’s crime rate is one of the highest in the world.

The ruin of this once prosperous, oil-rich nation might be a harbinger for other nations, such as the United States, which may be tempted into believing that Socialist giveaway policies actually can provide the promise of a free lunch for longer than the next election cycle. Or might that be all many politicians need or want? 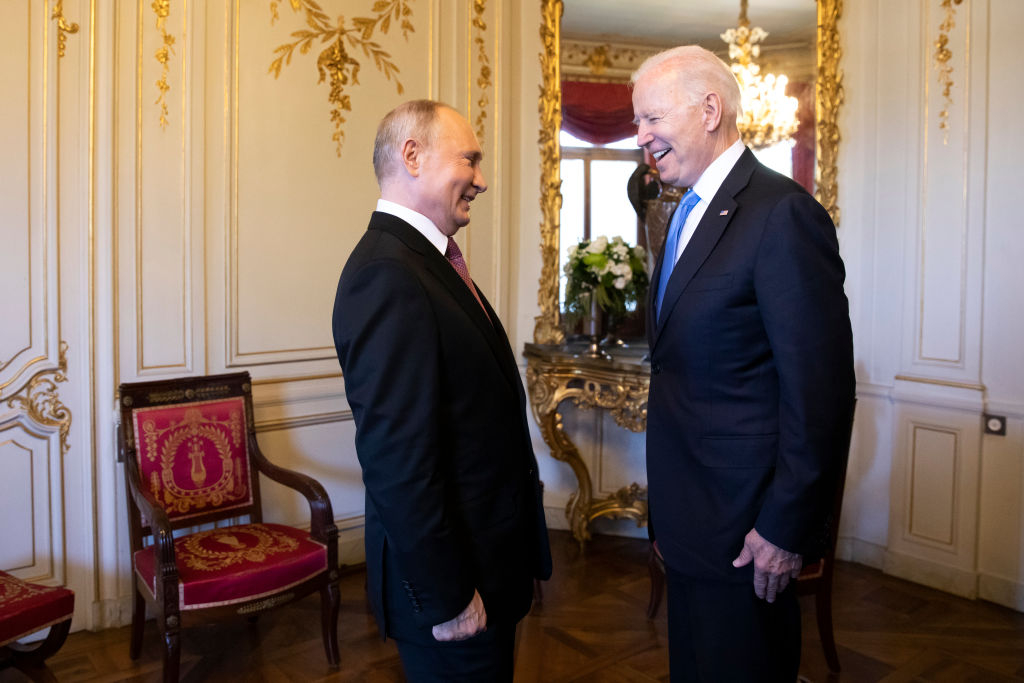