By HANNAH PARRY and REGINA F. GRAHAM FOR DAILYMAIL.COM and ASSOCIATED PRESS

More than two million people have been warned that their ‘time is up’ if they have not yet evacuated with ‘killer’ Hurricane Matthew just hours away from hitting Florida’s south coast.

President Barack Obama declared a federal state of emergency in Florida where the Category Four storm is expected to strike early on Friday morning with winds of up to 145mph.

Thousands of families have been caught in gridlock across the state and up the East Coast into the Carolinas and Georgia, as they flee their homes ahead of the storm which has already killed at least 140 people in the Caribbean.

‘Time is up. You have to evacuate now if you are in an evacuation zone,’ Governor Rick Scott of Florida warned this afternoon.

‘To everyone on Florida’s east coast, if you are reluctant to evacuate, just think of all the people the Hurricane has already killed. You and your family could be among these numbers if you don’t take this seriously.’

The powerful hurricane, the fiercest Caribbean storm in nearly a decade, has already killed at least 136 people in Haiti and four in the Dominican Republic. At its height, the hurricane was a Category Five with wind speeds of more than 157 mph.

The National Weather Service has advised that ‘loss of life’ and ‘immense human suffering’ is possible for those who don’t take precautions. It could also potentially leave approximately seven million people without power.

The Florida governor warned that the threat of the ‘deadly’ storm was real as he reiterated a call for people to evacuate.

‘Waves will be crashing on roofs. Homes will be destroyed. This is deadly. We have suspended tolls, doubled the amount of shelters and are making sure we keep the roads as clear as possible. There is absolutely no reason not to leave. If you chose to stay and try to ride the storm out, your life is at risk.’

Dark storms gather overhead at the beach in Miami, Florida where the storm is expected to hit overnight

Ominous: Storm clouds rolled in around 4pm on the Siesta Key Beach; Matthew was supposed to touch down on the mainland later this evening or early Friday morning

Traffic as far as the eye can see: Thousands of families have been caught in gridlock across the state and up the East Coast into the Carolinas and Georgia, as they flee their homes ahead of the storm – while the National Guard trucks drive towards the evacuation zones to assist

Local law enforcement works, with members of the National Guard to keep an evacuation route clear on I-26 during preparations for the expected arrival of Hurricane Matthew in Charleston, South Carolina, on Thursday
Posted at 17:17

The hurricane’s maximum sustained winds have decreased to around 120mph (195km/h), the National Hurricane Center says in its latest update.

It is now a Category 3 hurricane, and though it will probably weaken further over the next 48 hours, it will still be a “powerful storm” if or when it makes landfall on the Florida coast. 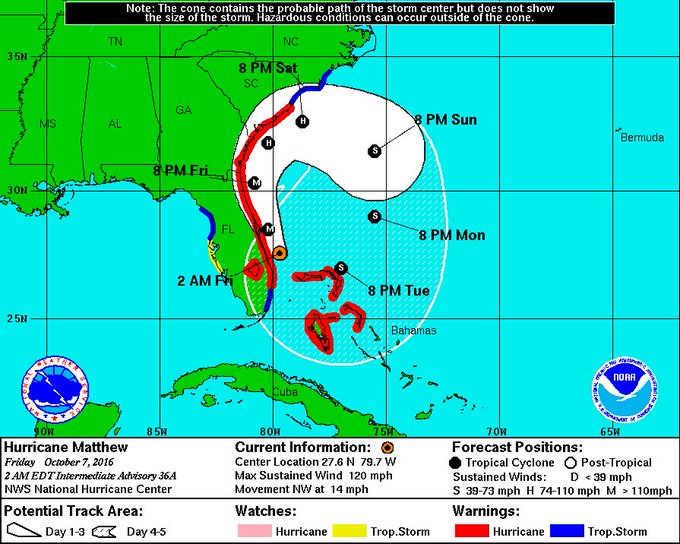