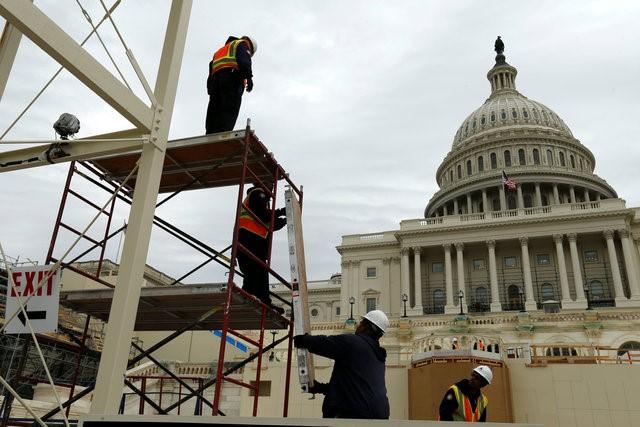 A presidential inauguration is usually a time for celebration. This year, however, it may look something like the beginning of a low-scale civil war.

And while the events of the next couple of days are expected to pose an unprecedented challenge for law enforcement, the “civil disobedience” promises to extend far beyond Inauguration Day.

Thanks to the outgoing Obama administration, according to an expert.

This year, militant left-wing protesters have vowed to sabotage public transportation and attack people with “throat punching” to cause chaos at President-elect Trump’s inauguration.

An undercover investigation also revealed a plot to use butyric acid against a gathering of Trump supporters.

One self-described anarchist group involved with the #DisruptJ20 events, “Crimethinc,” claims the goal is not just to cause chaos but to politically cripple the new president.

“[I]f the demonstrations interfere with the inauguration and the maintenance of order, that will help to normalize the kind of resistance that will be necessary to prevent Trump from implementing his agenda,” the group threatens.

But one of the nation’s foremost law-enforcement specialists and police advocates says it is the outgoing administration that has already normalized disorder and rioting.

“The Obama administration, from top to bottom, has glamorized unlawful, riotous demonstrations as some sort of righteous social movement to be adored and coddled,” he told WND. “Not so, not in a land of law and order that recognizes that one American’s freedoms end when they infringe on the peaceful existence of another American.”

As Breitbart has reported, anarchist websites are urging demonstrators to “go hard” because “this is our only chance to fight Trump under the laws and police protocol of the Obama era.”

“The words ‘go hard’ scare me,” Roorda said. “It sounds to me like a dog whistle meant to signal violence to those given to lawlessness, the types of people whom we’ve seen act with impunity at other ugly protests across the country.”

Because of a law urged by the ACLU, police will not be turning on their body cameras during the protests, thus potentially allowing violent demonstrators to get away with committing crimes.

The website DisruptJ20.org, which is serving as an organizing point for the dozens of groups expected to cause trouble at the event, urged people to “wear all black” and gather at Logan Circle at 10 a.m. the day of the ceremony.

“Those who travel to DC to celebrate Trump’s ascendance to power will find the inaugural ceremonies reduced to a total [expletive],” the group boasts. “Many different marches, blockades, and other autonomous direct actions are planned.”

The instruction to wear all black is likely an endorsement of the “black bloc” tactic, a common practice of anarchist groups in which they dress in similar clothing and mask their face to make it difficult for law enforcement to stop them from committing crimes.

As the website Crimethink puts it, “Acting in a bloc is especially useful when some of the participants in the action expect they may break laws.”

“Getting away with public criminal acts” is described as one of the most important benefits of the tactic, as well as how “empowering” it is for participants.

Roorda hopes the beginning of the Trump administration means an end to tolerance of such practices by the federal government.

“I expect the same thing from President Trump that I expect from any president,” said Roorda. “I expect the Trump administration and the Sessions’ Justice Department to enforce and honor the law. The law requires them to hold police departments accountable, which is good, but it doesn’t give the feds license to invent new, unreasonable criterion that hold police officers to an idealized, impossible standard. The law also requires that protests not be disruptive to civil society.

Roorda admitted every group, no matter how extreme, has the right to protest lawfully and be heard. But he blasted the idea a “black bloc” or any other group dedicated to criminal activity should be given a pass.
Read more