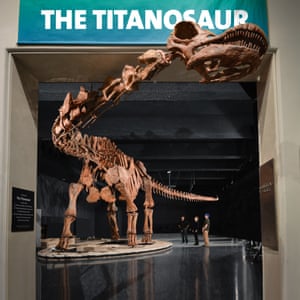 This article is 1 year old

Paleontologists at New York’s American Museum of Natural History unveiled a cast skeleton of the world’s biggest dinosaur, a new species of Titanosaur, to a packed crowd of media on Thursday morning.

“There’s nothing like finding a great new fossil. Especially a big one, like this one,” declared Michael Novack, the museum’s senior vice-president.

The skeleton – fiberglass recreations of the bones, since fossils are too heavy to mount – is 122ft long, too big to fit entirely inside the Miriam and Ira D Wallach Orientation Center, one of the museum’s largest display rooms, so the dinosaur’s neck and head poke out 9.5ft into the room next door.

This species of Titanosaur is so new – it was found in Patagonia, Argentina, by a group of researchers from Argentina’s Museo Paleontológico Egidio Feruglio – that its name has not yet been released.

A scientific study on the species, which gives it a name, has been submitted but not approved for publication yet. If the name is released beforehand, it is ruled invalid.

Mark Norrell, the chair of paleontology at the museum, said he referred to it like all other dinosaurs in his collection: by its catalog number, in this case 32893.

Diego Pol, a lead paleontologist on the dig that found it, laughed when asked if he would be naming it Polosaur or something else based on his own name.

However, he did hint at what the name might be. “We want to honor the place and the family that hosted us in the field,” he said. The specimens were found in a desert near La Flecha, Patagonia.

Researchers were tipped off by a local farmer who spotted a small part of a femur sticking out of the ground. Scientists took several days to dig out the whole femur, which was as large as a living room couch.

“During a period of three days you see it [the buried femur] keeps going in and going in and it’s getting wider and bigger. It’s like these mini-surprises that build up … and then you realize ‘wow, this is huge’,” said Pol.

Pol emailed a photo of himself lying next to the femur to Norrell along with the words: “Check this out, we just found this,” says Norrell.

The actual femur, as well as handful of other real bones from the dig, will be on display at the museum for the next year.

A total of six dinosaurs, all from this new species of the Titanosaur family, were found on the site – a “dinosaur cemetery”, as Pol dubbed it.

“We have six different animals that died in this same place, that was mind-blowing,” he said.

“We knew very little from previous giant dinosaur species. And when we realized we had an assemblage of hundreds of bones of a giant dinosaur, that was the biggest surprise for us. We couldn’t believe it,” said Pol.

It took seven expeditions over 18 months to excavate all 223 bones, with a new road being built to handle the trucks and equipment required.

“The most important and exciting thing is to be able, for the first time, to understand a giant dinosaur as a living organism. And you need a fairly complete skeleton to do that,” said Pol.

The skeleton cast on display came from 84 fossil bones from one specimen, which despite its height was only a teenager when it died.

Installing the dinosaur inside its new home was the most nerve-racking aspect for Norrell. The skeleton only just managed to fit vertically; the roof is 19.4ft high, while the top of the dinosaur’s back reaches 19.2ft.

This giant herbivore would have weighed around 70 tons, about 10 times the weight of an average T rex or African elephant.

With its neck straight, the dinosaur would have reached five stories high.

The Titanosaur display is open to the public from Friday, but third-graders from local elementary school PS 87 got a sneak preview of the massive beast.

If it was living and breathing, “I’d be so terrified, I’d run away,” said Riley, nine.

“I wouldn’t run into a house, because it would just crush the house,” added Alexyss.

Pol agreed with the kids. “I would hide,” he said.

The largest dinosaur in the world, was given its formal name by researchers: Patagotitan mayorum… twitter.com/i/web/status/8…—
MuseoEgidioFeruglio (@mefpatagonia) August 09, 2017

• This article was amended 15 January 2016 to correctly identify the paleontologist in the second image. It is Dr Diego Pol, not Dr Alejadro Otero as an earlier version said.