On September 13, Ukrainian President Vlodymyr Zelensky made a surprise trip to the city of Izyum in the Kharkov Region for a photo op following his military’s recapture of the town from Russian forces. During the visit, a soldier who appeared to be guarding Zelensky was photographed wearing a Nazi-inspired patch on his uniform. 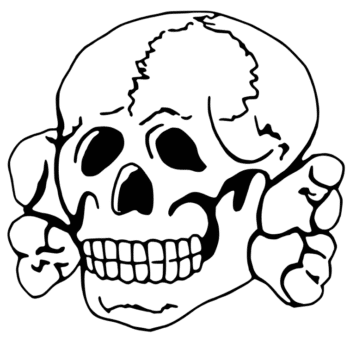 When the image drew criticism on social media, the Ukrainian president’s official Telegram and Facebook accounts quietly deleted it.

In Izyum on September 14, Zelensky participated in a flag raising ceremony to the tune of the Ukrainian National Anthem and took selfies with local civilians and soldiers. While most of the men on the scene wore official military fatigues, it was not difficult to see which ones were for lack of a better term, working, and which ones were simply present to participate in the event.

One photograph posted on Zelensky’s Telegram and Facebook accounts (archived here and here) captured the president as he posed for selfies with Ukrainian troops. As Zelensky flashed a smile for the camera of a cheerful service member, he was flanked by a heavily equipped soldier standing guard and facing the opposite direction. Just over Zelensky’s right shoulder, a small but significant patch could be seen on the back of the soldier’s flak vest.

Social media users quickly identified the symbol. It was derived from the “Totenkopf,” (German for “Death’s Head”), an insignia widely used in Nazi Germany. Badges incorporating the skull and bones motif were popularized by Germany’s Death’s Head Units, whose original task was to serve as guards at concentration camps. In October 1939, some 6,500 members were deployed as frontline fighters in the attempted conquest of Europe and the Soviet Union, carrying out war crimes and ethnic cleansing on their way. 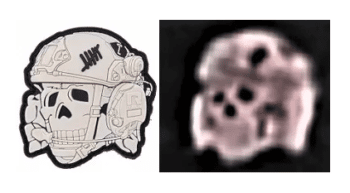 A side-by-side comparison of the R3ICH patch and an enhanced version of the patch worn by Zelensky’s bodyguard. It’s clear enough to show the outline.

Zelensky’s bodyguard appeared to sport a slightly altered version of the SS-Totenkopf’s patch; it was missing the crossbones and the skull was wearing a helmet.

However, this reporter was able to find three online vendors based in Ukraine that sell the patch, which is branded the “Operator Skull” and manufactured by a company called R3ICH, an explicit reference to Nazi Germany.

While a clear and sizable shot of the insignia decorating Zelensky’s apparent bodyguard has yet to emerge, enhanced renderings of the image demonstrate he was clearly sporting the same design manufactured by R3ICH. Both badges feature a skull wearing a helmet, the headgear is virtually identical, the nose and eye holes share the same amount of space between them, the silhouettes are indistinguishable, and the tally marks drawn on the helmet appear in the same location.

A closer look at the R3ICH’s “Operator Skull” patch reveals an even more disturbing detail: a skeleton key displayed on the top right of the helmet is a clear reference to SS Division Leibstandarte, or Leibstandarte SS Adolf Hitler–Hitler’s personal bodyguard unit. The unit later evolved into a Panzer, or armored tank division and, like the Totenkopf, participated in several invasions throughout Europe and the Soviet Union. 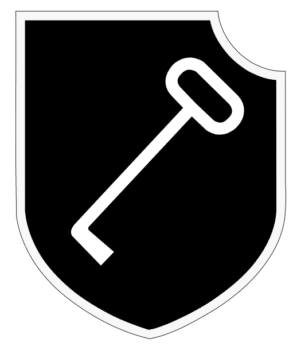 The skeleton key emblem of the SS Division Leibstandarte

While the SS Division Leibstandarte made its way through Kharkov–where this week Zelensky’s bodyguard was photographed with the “Operator Skull” patch–during the Second World War, one of its units earned the nickname “Blowtorch Battalion” for its habit of burning down Russian-speaking villages.

After this reporter took to social media to report that Zelensky’s bodyguard appeared to be wearing the “Operator Skull” patch, no less than eight Twitter users asserted the image was photoshopped. Shockingly, Twitter even deemed MintPress News’ tweet about the photograph to be “sensitive content,” an apparent attempt at damage control on Zelensky’s behalf that reduced the image’s visibility on the platform.

The sighting of the Nazi patch recalled a 2018 incident in which then-Ukrainian President Petro Poroshenko posed with soldiers bearing placard featuring the Nazi Totenkopf symbol. Newsweek spuriously claimed, “The image included a skull and bones that appear to have been Photoshopped onto the photograph of the Ukrainian troops.” However, as The Grayzone reported, the soldier standing directly beside Poroshenko was wearing the Nazi-inspired patch on his chest. The paratroopers later apologized for displaying the Nazi symbol, further discrediting Newsweek’s spin.

As before, the image of the Nazi patch was real. What’s more, the R3ICH company’s “Operator Skull” patch seems quite popular in Ukraine. Of the three Ukraine-based online shops that this reporter discovered were selling the Nazi emblem, none had any left in stock.