UPDATED 6:57 AM EDT, – Houston is flooding so fast and so badly, the entire city may be lost!

The stream elevation gauge in Brays Bayou shows the explosive rise in water level in just one hour: 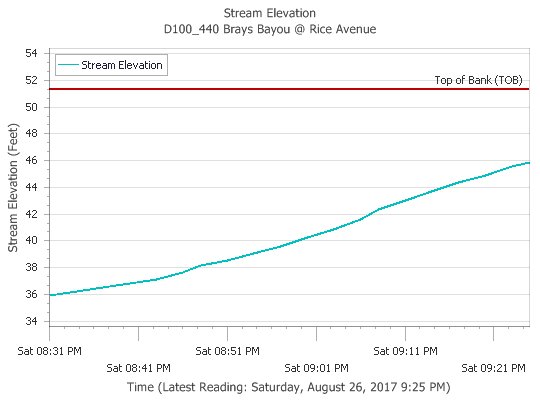 At least TWO Houston Police Precints have had to close and evacuate due to the flooding.  The Houston Fire Department has so many calls, they have no additional “Swift-Water-Rescue” teams to dispatch!

The situation in the city due to the torrential rains from Hurricane Harvey, is getting very bad, very fast.

ALLIGATORS ARE IN THE STREETS! 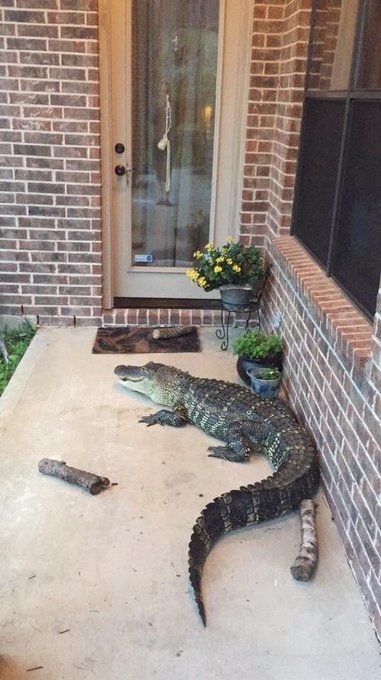 Gators and flooding advice via @txgatorsquad: Expect them to be displaced. Simply looking for higher ground. Leave alone until water recedes

Many more have been stranded in homes and on rooftops, and entire stretches of freeway in the county – one of the most populous in the country – are submerged. Officials believed the first fatality to be a woman who was found dead near her car, in which she had likely been trapped during a flood, according to the Washington Post.

“This event is unprecedented,” the National Weather Service said in a message posted to Twitter. It’s “beyond anything experienced.”

Some parts of Texas could receive up to 50 inches of rain in the coming days, an amount that would exceed state records. As images posted to social media showed roads inundated with water – submerging cars and covering street signs – officials in Houston and Galveston asked residents with high-water vehicles or boats to assist in rescue efforts.

Galveston County Judge Mark Henry said in a press conference Sunday afternoon that 25 to 35 private boat owners had responded to the call, and were helping transport people to safety.

In Houston, the 911 line received 56,000 calls between 10 p.m. Saturday and 1 p.m. Sunday, local authorities said, seven times the usual volume. Earlier Sunday, Houston Mayor Sylvester Turner tweeted that Houston 911 was being overwhelmed with calls but was still functional. “There are a number of stranded people on our streets calling 911 exhausting needed resources,” he wrote. “You can help by staying off the streets.”

The city’s official Twitter account also posted that 911 services were at capacity and to only call if in imminent danger.

Between Saturday and Sunday morning, Houston and Galveston received about two feet of measured rainfall, the National Weather Service said. The region is expected to receive up to two more feet of rainfall over the coming days.

“I know for a fact this is the worst flood Houston has ever experienced,” Patrick Blood, a National Weather Service meteorologist, told the Chronicle.

Harris County Judge Ed Emmett told the Chronicle 1,500 to 2,000 high-water rescues had been made by the county since Saturday night. And other county officials said 18 helicopters were rescuing those stranded on rooftops, after residents in flooding areas were urged to seek refuge there.

“Reports of people getting into attic to escape floodwater – do not do so unless you have an ax or means to break through onto your roof,” Houston Police Chief Art Acevedo wrote on Twitter.

With emergency resources strapped, social media became a channel where pleas for rescue were issued for those trapped by flood waters that are expected to keep rising. The posts gave glimpses of the unfolding crisis and included exact addresses, names and pictures of southeast Texas’ stranded residents.

“Please help if you can or get this information to authorities,” claimed a postfrom twitter user Alicia Stepp. “The entire street of Colony Creek Drive needs rescue.”

Yet another asked for help for 10 people, 3 dogs and two cats stuck on a roof in Dickinson. One post about a Houston family, which included a sick child, came with a picture of the people standing on their rain-soaked roof.

Authorities asked residents to not make distress calls over social media. Still, CNN reported over a dozen nursing home residents were rescued after a viral picture showed a group of elderly people in a Dickinson facility sitting in waist-high water.

Henry, the Galveston County judge, said in his press conference that Dickinson was the hardest-hit part of the county, and estimated 800 to 1,200 people in the area had been rescued so far.

By Sunday afternoon, reports from Houston said Ben Taub Hospital had evacuated patients, major oil refineries temporarily shut down, and airports closed. Local schools announced they would not be open this week.

Hundreds have streamed into the city’s downtown convention center, which has been turned into a temporary shelter, the Associated Press reported.

In Corpus Christi, power outages from the storm caused 100,000 gallons of wastewater to be spilled into the La Volla Creek – though a news release from the city said the discharge of untreated sewage does not affect the the city’s drinking water supply. Crews are monitoring and responding to the overflow, the release said.

Harvey made landfall late Friday as a Category 4 hurricane that left one person dead in Aransas County and wreaked havoc on buildings along the Texas coast. Over time, as the storm crept inland, its wind speeds diminished and meteorologists downgraded it to a tropical storm. Once inland, the storm slowed to a crawl and dropped hours of torrential rain across southeast Texas, which caused officials to warn of catastrophic flooding for days to come.

Rockport was one of the worst hit coastal towns by the Category 4 storm. Hurricane Harvey blustered through the town on Friday and Saturday, bringing with it unprecedented downpour and triggering life-threatening floods

Salt Grass Landing Apartments in Rockport, Texas, were entirely destroyed in the hurricane. No residents were thought to have been inside the building when Harvey took hold

At a Sunday press conference, Turner defended his earlier advice encouraging Houstonians not to evacuate.

“You cannot put, in the city of Houston, 2.3 million people on the road,” he said. “That is dangerous.”

Added Turner: “If you think the situation right now is bad — you give an order to evacuate, you create a nightmare.”

Jeff Lindner, a meterologist with the Harris County Flood Control District, said more than half of the county’s 22 watersheds were experiencing “record flooding,” some higher than what was seen during Tropical Storm Allison.

“I know you’re scared; I know you’re panicked,” Lindner added. “I know you feel like in a desperation right now, but know that help is coming.”

“We’ve moved beyond whether or not there should have been an evacuation or not,” he said. “We are at the stage where we just need to respond to the emergencies and necessities that the people around Houston have.”

Abbott said 500 officers from the Texas Department of Public Safety had been assigned to the Houston area, and another 3,000 state and national guard members were assisting with search-and-rescue missions in various areas affected by the storm.

In Washington D.C., at the FEMA command room near Capitol Hill, nearly 200 federal government workers and military members gathered to strategize the delivery of supplies to the hurricane-wracked region.

Cars power through flood water in Galveston, Texas, on Saturday. Life-threatening floods are expected on Sunday

“I will be going to Texas as soon as that trip can be made without causing disruption. The focus must be life and safety,”  Trump tweeted Sunday morning.

Harvey slammed into Texas, the heart of the U.S. oil and gas industry, late Friday.

It ripped off roofs, snapped trees, and triggered tornadoes and flash floods, and cut power to nearly a quarter of a million people.

It also curtailed a large portion of America’s oil and fuel production, prompting price hikes at the pumps.

Harvey has since weakened to a tropical storm, but is expected to lash Texas for days as it lumbers inland, bringing as much as 50 inches of rain to some areas, and affecting heavily populated.

The National Hurricane Center described the rain forecast for the state as potentially ‘catastrophic.’

One person died in a house fire in the town of Rockport, 30 miles north of the city of Corpus Christi, as Harvey roared ashore overnight.

Mayor Charles Wax said in a news conference on Saturday, marking the first confirmed fatality from the storm.

Another dozen people in the area suffered injuries like broken bones, another official said.

Charles Bujan, the mayor of Port Aransas, said that people are being urged to stay away until emergency crews can clean up leftover debris and wreckage