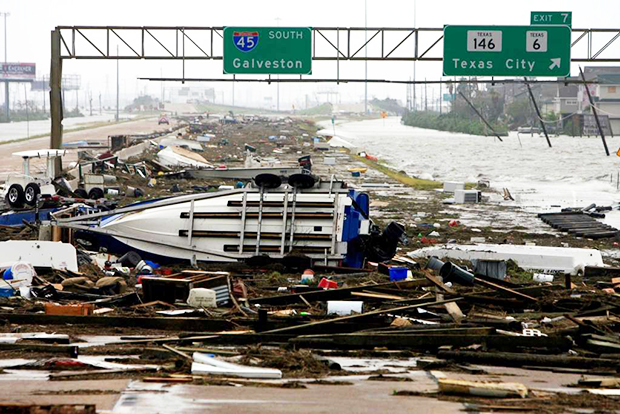 In it he saw great destruction in Houston TX, which he describes as follows:

“I looked out over the water and saw massive amounts of debris coming into the waterway. I saw pieces of rooftops, houses, and all manner of trash floating in the water. It was the leading edge of incredible amounts of fragments of what used to be homes and businesses. I didn’t understand where all this debris could possibly be coming from or what could cause such a mega-disaster. The cruise ship certainly would not escape being trapped in the rubble, the debris was so thick, I knew I could walk on top of it all the way back to Houston.

I heard a His voice say, ‘When you see this, it has begun.’

I looked forward towards the bow of the cruise ship and saw two tanker ships directly in front of us, a couple of hundred yards ahead of our ship, sailing side by side, cutting a path through the thick debris field for us. The tankers were stoutly built and could withstand the beating from all the trash in the water. As the tankers cut through the rubble, they left a clear watery path, making smooth sailing for us, even in the middle of this catastrophe. We had no choice but to follow them to get back to port.

When we got near the dock, I simply opened the two side doors of the ship, waited for the dock hands to secure the ship and stepped safely down onto the dock. It was such relief to be safe back in port.” (see the complete post)

I believe it is significant that exactly eight years passed between the day he received the dream and today because the number eight represents new beginnings and this dream revealed the start of something new. He heard the Lord say, “When you see this, it has begun.”

What has begun? Billy understood it was a confirmation of many other prophetic warnings God had already given him regarding judgment coming to the United States. He wrote, “I believe this dream goes along with what the Father has been saying to me about more and more intense judgments are coming to America.”

His description of the judgments as “more and more intense” confirms what Jesus said would happen in the days prior to His return. He described it as being like birth pangs because the pain gets greater and more frequent as the time of delivery draws near. (Matthew 24:8)

Amazingly, my friend Lyn Leahz emailed me today to tell me what Brother Billy saw in his dream is happening today as he is currently on a cruise ship near Houston, stranded with 20,000 other passengers, as Galveston police explained:

According to local police in Galveston, Texas, officials hope the ships are not able to make port while there is still significant flooding because roadways out of Galveston are blocked and people getting off the cruises would be unable to leave the island. Many of the passengers’ cars that are parked in the cruise terminal lots are stuck there because of flooded access roads. (Source: Fox News)

I believe the events happening in Houston can only be understood in the larger context of where we are in God’s prophetic timeline.

Contrary to the false prophets proclaiming all is well, trouble must come because prophecies recorded thousands of years ago in the scriptures must be fulfilled before the Lord returns. I believe we are fast approaching what the angel Gabriel described as “a time of anguish, such as has never occurred since nations first came into existence.” But the good news is Gabriel also said, “At that time your people shall be delivered, everyone who is found written in the book.” (Daniel 12:1)

Prophetic warnings indicate another event could be coming soon.

“The water represents judgment. Judgment is coming to Houston and it will be destroyed, desolate, and uninhabitable.” – ( Read that statement again! )

Her vision revealed two floods and two storms in Houston!

She wrote, “Then the water retracted, but then it came back again with force and strong winds. The water was destroying everything in sight. Cars were being flipped over and everything was catching on fire.” (see the complete post)

Her description makes me think perhaps what is happening now is only the first part of the fulfillment of what Brother Billy Nelson saw in his dream.

What he saw was so amazing, he wondered how it could happen, so he asked God about it and received another prophetic vision a couple of weeks later on September 15, 2009.

“In the vision, I was observing from a high altitude. I saw the Houston, Galveston coastline below. A very weak unnamed storm was brewing just off shore. The TV weather reported said, “This storm is nothing to worry about whatsoever.”

Then it suddenly intensified and became a very large black storm like no one had ever seen. The storm moved inland in a large black mass and engulfed the city of Houston and surrounding area. Soon afterwards the storm withdrew, it drug back a massive amount of debris as it returned to sea. It caught millions off guard and there must have been a great loss of life and property. Then I saw a calendar with the month September and the year 09. Then a hand appeared and marked a line through the 09. End of vision.” (see the complete post)

The year was marked out, so it was not revealed, but the month was revealed as September.

Putting Billy’s vision together with what Pamela saw, a second storm will bring more flooding and strong winds to the Houston area and its’ destruction will be greater than the first because Pamela saw “everything catching on fire” and Billy saw, “It drug back a massive amount of debris as it returned to sea.”

Even though the first storm has already landed, we have not been shown how much time passes before the second one hits. Perhaps the area will be granted a reprieve.

However, tropical Storm Irma has already formed in the Atlantic Ocean with winds of 50 miles per hour and is expected to be upgraded to a hurricane by Friday, September 1st.

However, it’s too early for weather forecasters to know Irma’s path.

Previous posts on Z3 News have identified 2017 is a transition year as we are exiting one season and starting a new one. For many of God’s people, this is a time of exiting a long season in the wilderness and entering a new season of fulfillment of what God has promised. I believe the sign in the heavens coming on September 23 is another confirmation, marking the fulfillment of Revelation 12, a woman giving birth to a male child.

The woman is the Church and the male child is the righteous remnant, God’s end-time army, moving into their assignments to usher in the return of the Lord. However, at the same time, a new season of great darkness is coming upon the unrighteous, those who refuse to repent of their sins and walk uprightly before God. So, we’re seeing an increased separation of light and darkness, holy and unholy, righteous and unrighteous.

We are seeing history repeat itself as God is saying, “I will make a distinction between My people and your people.” And just as He did in ancient Egypt, He is once again giving us a sign to confirm it. (Exodus 8:23)

Even in the midst of great trouble, God is able to protect and provide for His people, but not everyone who calls Jesus their Lord truly belongs to Him, but only those who do the will of His Father. (Matthew 7:21) God is not impressed by our talk, but He takes note of our walk. His ears are attentive to the cries of the righteous. (Psalm 34:15 and 34:17, Proverbs 15:29, 1 Peter 3:12) The fervent prayers of a righteous person can accomplish much. (James 5:16)

If you are not in a right relationship with God, then you need to repent of your sin, and place your faith in the Lord Jesus Christ.

Click here to find out how you can begin today.

James Bailey is an author, business owner, husband and father of two children. His vision is to broadcast the good news of Jesus Christ through blog sites and other media outlets.