In preparation for Hurricane Irma’s assault on South Florida on Sunday, police are going door to door telling people to leave to avoid life-threatening rains, winds, and flooding. The mass exodus is creating large traffic jams on Interstates 95 and 75 and the Florida Turnpike, which can be seen on this live Florida traffic map. 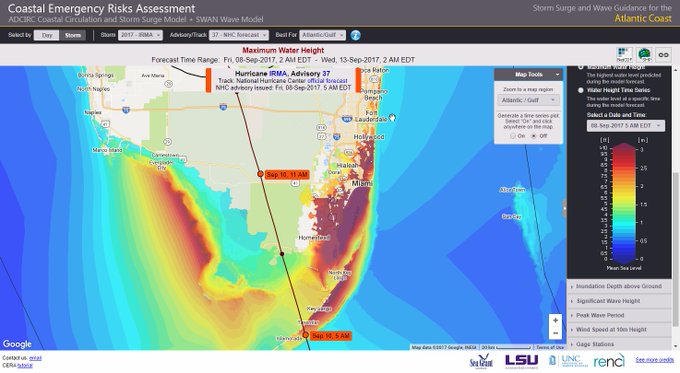 Analysis by Climate Central shows that the Florida storm surge from hurricane Irma could endanger millions, and result in billions in property damage.

Climate Central has created the resources to help anyone remaining in the area visually understand how dangerous the flooding will be in their neighborhood and take safety measures accordingly.

The videos use Google Earth to simulate what the these storm surge forecasts would appear like in different South Florida neighborhoods.

The height  above mean sea level for each simulation is shown in the titles.

As local topography varies, these values translate to approximately 7-10 feet of water above ground in many areas according to the Storm Surge Warming forecasts from the National Weather Service.

Irma is expected to cause catastrophic damage and has already been one for the record books, sustaining 185 mph winds for more than 24 hours, a record length of time for a hurricane in the Atlantic.