“Your New Moons and your appointed feasts My soul hates; They are a trouble to Me, I am weary of bearing them. — Isaiah 1:14”

“I hate all your show and pretense— the hypocrisy of your religious festivals and solemn assemblies.  — Amos 5:21 NLT

“Give glory to the LORD your God before it is too late. Acknowledge him before he brings darkness upon you, causing you to stumble and fall on the darkening mountains. For then, when you look for light, you will find only terrible darkness and gloom”  —  Jer 13:16 NLT

The Lord spoke to Jeremiah concerning Israel, and these words also describe a large portion of today’s Church.

“This evil people, which refuse to hear my words, which walk in the imagination of their heart, and walk after other gods, to serve them, and to worship them, shall even be as this girdle, which is good for nothing.” Jeremiah 13:10

God’s Word tells us plainly that we reap what we sow, to wit:

“Be not deceived; God is not mocked: for whatsoever a man soweth, that shall he also reap.” Galatians 6:7

Unfortunately, in large measure the Church of today is severely compromised, and many do not even realize it.  The people who are compromised are blinded by the god of this world.  I can hear what some of you are thinking; that these are Christians, and therefore, they can’t be blinded by Satan.  Actually, yes they can, and are they really Christians to begin with?  Christians can be blinded; otherwise, we would not have any need for the Armor of God spoken of in Ephesians 6.

“Ye have sown much, and bring in little; ye eat, but ye have not enough; ye drink, but ye are not filled with drink; ye clothe you, but there is none warm; and he that earneth wages earneth wages to put it into a bag with holes.” Haggai 1:6

Haggai in a sense is saying that doing anything without the Lord God is futile.  We ought to be about the Lord’s work first, and our own second.  All that we need, God will provide for us; “But seek ye first the kingdom of God, and his righteousness; and all these things shall be added unto you” (Matthew 6:33).  Not only does the Church ignore the prescribed work of the Lord, but it has become worldly, and not set apart as it is supposed to be.

Instead of fulfilling the Great Commission, Churches worry more about entertaining people and not offending them.

Sermons are puff pieces that often lack any serious teaching.  Church is more like a social event than what church is supposed to be about – teaching and learning the Word of God.  Even more importantly, worshipping God, thanking Him, praising Him, and adoring (loving) Him with our very souls.

Salvation is nothing more than joining a club or organisation. Sin is relegated to wrongdoing and mistakes.

Instead, Churches are dismissing parts of the Bible as fake, mere stories, not to be taken seriously.  Other parts of the Bible are completely ignored.  Homosexuals and lesbians are allowed to be pastors, and pastors use vile and filthy language in their sermons.  Pastors and their congregations support abortion and infanticide, and have no problem cursing those who do not, not to mention giving them the finger.  And these are Christians?

The Apostle Paul gives us warning; a warning that should be heeded but is not:

“The night is far spent, the day is at hand: let us therefore cast off the works of darkness, and let us put on the armour of light.”
Romans 13:12

The church is supposed to expose the darkness not transpose the Darkness!

I fear for the Church; much is done within the Church that should not be, and much is not done that should be.  The Church cannot thumb its nose at God and expect that things will turn out well.  God does care for us, He allowed Himself to be killed for our benefit after all.  But that in no way means that God is going to overlook the unfaithfulness of the Church, or excuse it.

Those who follow a perverted gospel as the Pharisees did will share their fate – Hell.  There is yet time to turn things around, those who return to Christ as did the “prodigal,” can be forgiven and accepted back into the fold.  Lost sheep are important to God – I know; I was one of them.

“This know also, that in the last days perilous times shall come. 2 For men shall be lovers of their own selves, covetous, boasters, proud, blasphemers, disobedient to parents, unthankful, unholy, 3 without natural affection, trucebreakers, false accusers, incontinent, fierce, despisers of those that are good, 4 traitors, heady, highminded, lovers of pleasures more than lovers of God; 5 having a form of godliness, but denying the power thereof: from such turn away.” 2 Timothy 3:1-5

The Roman gods of the Lion, the Eagle, Man, Swiftness, Power, Greatness and the Emperor

Gods in human form, and groups together a painting, a piece of sculpture, a pagan text, and Christian polemic.

The earliest Roman religion was a form of primitive ‘animism’, in which divine power was seen as widely diffused through natural phenomena, not located in superhuman beings (gods and goddesses); and that Rome only gained a mythology, with fully anthropomorphic gods and goddesses, by ‘borrowing’ them from the outside world (particularly Greece).

Fire Dancers in the Roman Court

The process of Roman conquest often involved the Roman assimilation of the gods of the conquered people. One particular ceremony (known as evocatio, literally a ‘summoning away) attempted to win over to the Roman side the protecting deity of an enemy city before the Romans had conquered. The Roman general would offer the enemy god a cult and temple in Rome – so depriving the enemy of their divine protection, while at the same time incorporating a new deity into the Roman pantheon.

The production under the backdrop of a Roman Temple

‘And many among them shall stumble, and fall, and be broken, and be snared, and be taken.’ — Isaiah 8:15

Magna Mater (Cybele) and her cult One of the most notorious deities introduced to Rome from the F.ast was Magna Mater (literally ‘the Great Mother’), also known by her Greek name Cybele. A native deity of Asia Minor, her image (not an anthropomorphic 43 2 .

TH E DEITIE S O F ROM E statue, but a black stone, probably a meteorite) was brought to Rome from her shrine at Pessinus (in Phrygia) in 204 B.C., during the war against Hannibal; it was accompanied by her cult officials, who included the eunuch (reputedly self-castrated) priests, the galli (8.7). Shortly after her arrival, the goddess was given a temple at the very heart of the city (on the Palatine hill) and her rituals were gradually incorporated into the official calendar (see 3.3a n.2; 3.3b; 5.6a and b; 6.7)

The Cult of Magna Mater, the Great Mother, is probably the oldest religion of all.

The earliest stone-age sculptures depict the mother- goddess, and an idol found in Catal, 6000 years old, depict her in the form she later became worshipped as Cybele in Phrygia, as a seated woman flanked by two leopards.

The worship evolved through the millennia, but the goddess remained a symbol of the powerful female forces in the universe. Many different interpretations appeared, and various cults have interacted and mixed ideas. Not much is known about her worship in ancient times, but in her incarnation as Cybele in ancient Phrygia she started the cult which would later evolve into the cult of Magna Mater in Rome.

She invented pipes and drums, and also magickal medicines which she used to heal sick children and creatures on the Phrygian countryside.

The links between this story and the cult of Inanna/Ishtar/Asherah are quite obvious, and both cults influenced each other heavily. Attis was identified with Dumuzi and Tammuz, other dead and resurrected gods. The cults were widespread, and Ezekiel mentions the female worship of Tammuz in his lamentation over the spread of paganism in Jerusalem (Ezekiel 8:14).

Around 200 BC the holy black rock of the goddess was moved from the Phrygian city of Pessinos, which had been the previous centre of her worship. Rome became the new centre, and her cult grew. 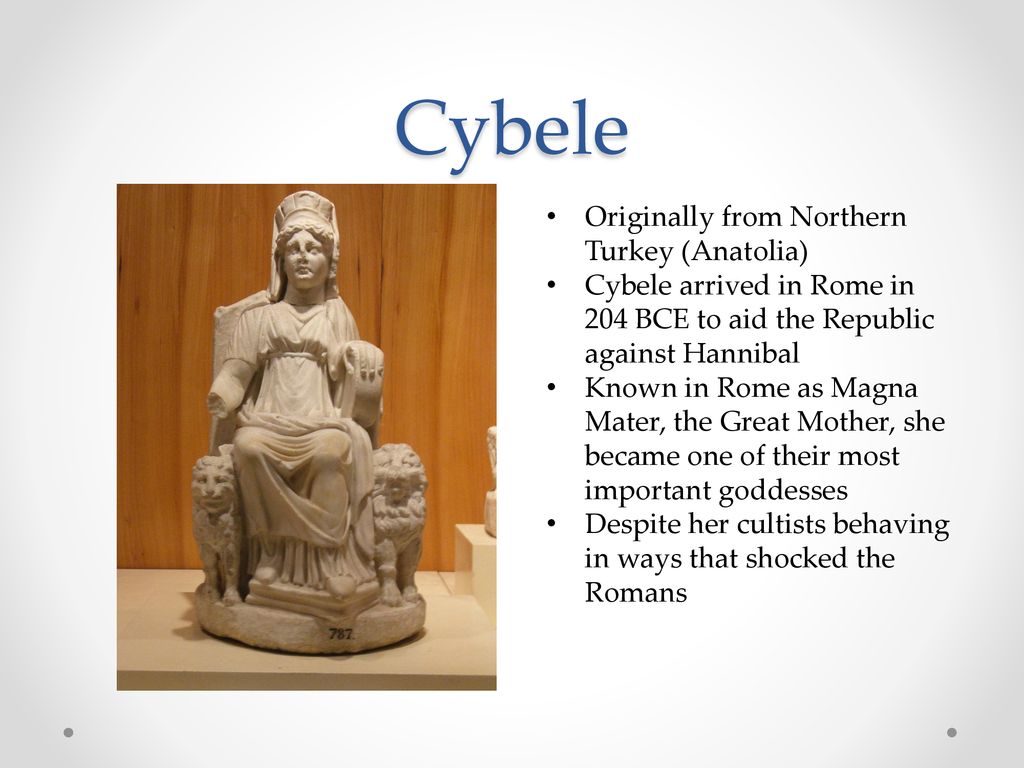 The romans identified Cybele with the Greek Rhea, and called her Magna Mater, the Great Mother. The priests of the cult were men who had castrated themselves in front of her image, but most of the followers were women.

Much gossip went around about the indecencies and depravities of the cult, but due to the protection of influential people it avoided persecution.

The cult was led by the female priestesses and the Archigalli, the high priest of the subordinate Galli; castrated male priests who were responsible for most of the dance, divination and healing of the cult.

Many of the worshipers were organised into fraternities, most notably the Dendrophori (“Tree-bearers”) and Cannophori (“Reed-bearers”). Members of these fraternities enjoyed a bit of social status and influence, and many important people flocked to them. The liturgy of the cult was in Greek. Many of the ceremonies commemorated the deeds of Magna Mater and her love to Attis, who represented the fertility and plants of the land. By his castration and death the land was given new life. Many festivals were held, called ludi (“plays”) which were enthusiastic carnivals with banquets and comedic performances.

One of the major festivals was Megalesia the 4-10 April. At the height of the celebrations the taurobolium was performed, as a bull was castrated and sacrificed, and new initiates were baptised in its blood. Another major festival was celebrated the 25th March to commemorate the castration and death of Attis. The Cannophori carried reeds and stalks to the temple together with the idol of Attis. The taurobolium was performed, and the genitals of the bull was thrown into a cave or well consecrated to Magna Mater.

The All Seeing Eye watches over baby Jesus

The Sun Goddess singing to the shepherds in the winter night

The Sun Goddess as part of the declaration of Jesus Birth

The head dress worn by a sun goddess

All of this idolatry was once attributed to the corrupt Roman Catholic Church, but now evangelicals mock the Birth and even the Death and Resurrection of the Lord Jesus, by symbiosis through these presentations into pagan thinking and culture.

The summer solstice occurs once a year in December when the Sun’s track across the Australian sky reaches its highest point. It is the day that has the most daylight hours of any in the year. The summer solstice usually occurs on 22 December, but can occur between 21 and 23 December.

How coincidental that on the LONGEST day (the Summer Soltice) Hillsong put on its Christmas Pageant celebrating the SUN!