Millions of Americans celebrated the solar eclipse on August 21.

The news media joined in with lots of coverage, but those who knew what it meant weren’t celebrating because the Bible identifies solar eclipses as a sign of God’s coming judgment, a time for mourning and repenting, not celebrating.

Then I looked, and I heard an eagle flying in midheaven, saying with a loud voice, “Woe, woe, woe to those who dwell on the earth, because of the remaining blasts of the trumpet of the three angels who are about to sound!” (Revelation 8:13)

Those days will be so terrible, men will seek death, but will not find it because death will flee from them. (Revelation 9:6)

There is no mistaking which nation was targeted by the August 21 eclipse because it only passed over one, the United States. That was three weeks ago, and since then we have yet to make it through one whole week without a significant life-threatening event.

The eclipse was celebrated as a once in a lifetime event, but another one is coming on April 8 2024, in the seventh year after the first eclipse, but more precisely, six years, six months, six weeks plus a few days, depending on how many days we assign to years and months since years are not exactly 365 days and months are not always 30 days. I think all the sixes have a hidden message of incompletion because six is one short of seven, which represents perfection and completion. Six represents man’s incomplete state without God, man going his own way rather than God’s way, wrongly thinking he will not be held accountable, but God will hold every man accountable for his deeds.

The 2017 eclipse formed a diagonal line across our nation from northwest to southeast. The 2024 eclipse will form a line from southwest to northeast, with the two lines intersecting right over the New Madrid fault line. 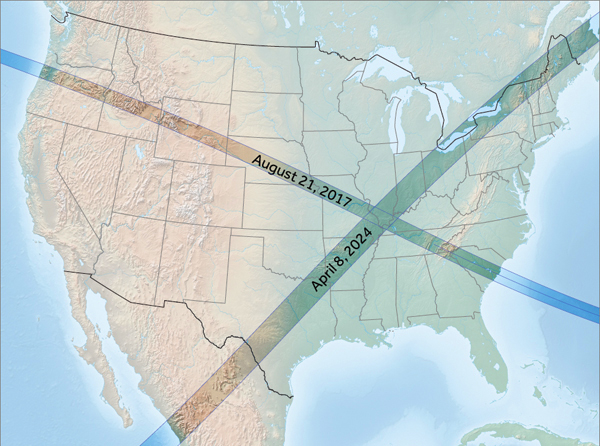 Z3er Sandra received a powerful word from God regarding the two solar eclipses. Sandra was saved at age 19 and called by God as a prophetess at age 21. Her and her husband have worked as missionaries for about 20 years. Last week, she sent me this:

Regarding the recent solar eclipse, the Lord had been telling me for the last few years, “Dark days are coming”. Recently, He said “The solar eclipse that crossed the United States on August 21, 2017, was a sign that dark days are here. This solar eclipse and the one to come on April 8, 2024, are like bookends with seven years of judgment and harvest in between.”

I was directed to the Scripture where John the Baptist said, “He must increase; I must decrease”, and the Lord explained to me, “The United States is a John the Baptist, a forerunner nation that was created and brought into existence to help with the rebirth and nurturing of Israel in 1948, and to spread the Gospel of Jesus Christ all over the world, but the United States is no longer going to be the nation that everyone watches, because it is now time to shift attention back to Israel who is looking for the Messiah. The United States must be willing to decrease, working more behind the scenes, so Israel can increase, coming more to the forefront.”

Although there is much turmoil taking place in the United States and much more is coming, if we will get back to making it a priority to support Israel and to preach the Gospel of Jesus Christ, there will still be something left of this nation when it is all said and done.

Also, the Lord told me, “Something really big is coming and you need to brace yourselves because it will be bigger than September 11, 2001.”

Before hurricane Harvey hit, the Lord told me, “There will be notable death and destruction.” I believe it is now happening, but it isn’t over.

Sandra’s warning confirms many other prophetic words telling us judgment on the United States has started. By connecting the two eclipses with the start and ending dates, Sandra has identified the exact length of the period of judgment and harvest.

In December 2015, prophet Brian Carn also saw a time of judgment coming upon America from 2017 to 2024. He also saw 2024 marking the end of America as we have known it. He saw there will be an attempt to rebuild it in 2024, but it will never again be what it was. It will only be rebuilt as something completely new.

“A new nation is forming before America. A new historical culture will be created. The compromise of the Constitution has begun,” says the Lord. “I will show you the light of liberty and how it burned bright, but now that light is fading, and you will eventually be the light that shall replace the light of the Lady Liberty,” says the Lord.

“A new historic change will be created as a classified course of action shall be found in America. This nation after next year (2016) will never quite be the same. For even so, they will try to restore what happens by the year of 2024 to America, and try to rekindle old memories from long ago, but it shall never be the same, nor will it ever quite be the same. For in these next eight years, major tribulations will come and certain places deemed safe, now will not be safe as time evolves. Thus the move and the mandate to move will be in the mind,” says the Lord. (see the complete post)

Prophecy after prophecy keeps coming forth, confirming what God is doing, but the repetition seems needed because so few are willing to hear it. Much of the Church is still scoffing, mocking, and sleeping, but God has a remedy for that. Another loud wake up call is coming. Sandra was told something bigger than September 11, 2001 is coming, confirming similar warnings received by others. As the late John Paul Jackson repeatedly said, “The judgments will continue to get worse until the Church repents.”

In sharp contrast to many so-called prophetic voices claiming, “All is well, judgment has been averted, and we’ll soon become great again”, the evidence shows the opposite is happening. America has entered a period of severe judgment that will continue to intensify during the next seven years.