Uber was today stripped of its licence to operate in London following months of controversy surrounding the company.

Transport for London announced plans to remove more than 40,000 cars from the capital’s streets unless the US firm were able to successfully appeal against the decision.

Millions of Londoners who use Uber will be affected by the decision – but how long do they have left to use the app and how will it affect the capital?

How many Londoners use Uber?

Three-and-a-half million people across the capital are signed up to the app which allows users to hail and pay for a taxi at the touch of a button.

Tens of thousands of journeys are taken across the city each week, split between 40,000 drivers working in the capital.

How long do people have left to use the app?

Uber’s licence is due to expire on Saturday, September 30.

TfL have given Uber 21 days from this date to appeal the decision based on a list of criteria they must meet.

According to TfL bosses, the company will be allowed to continue operating until appeal processes have been exhausted.

Londoners will be able to use Uber until at least October 21 and perhaps longer if the appeal process is extended.

Why has Uber been stripped of its licence?

The decision comes after years of controversy surrounding the app since it launched in London in 2012. 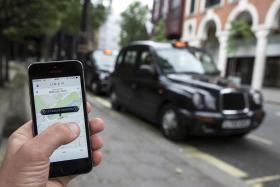 Uber stripped of its licence to operate in London

TfL ruled that Uber was “not fit and proper” to hold a private hire licence and had shown a “lack of corporate responsibility” in relation to public safety.

In the ruling, TfL raised concerns over Uber’s approach to reporting serious criminal offences and how it obtained enhanced criminal records checks for drivers.

Earlier this month MPs on the all parliamentary group on taxis claimed the US firm was not a “fit and proper operator” following a string of alleged sex attacks by drivers.

In August the firm was accused by police of allowing a driver who allegedly sexually assaulted a passenger to strike again by not reporting the incident.

Between February 2015 and February 2016, there were 32 sexual assault claims made against Uber drivers in London.

In the past 12 months to February 2017, that figure rose to 48 alleged offences.

Earlier this month, a different court was hearing another case involving an Uber driver. This time, Jahir Hussain was jailed for 12 years for attacks on three separate women in London. He groped two and raped the third, cutting off their underwear with a knife after they fell asleep in the back of his cab.

A spokesman said Uber’s thoughts were with the victims, but added: ‘While these attacks did not take place on a trip booked through our app, we were still able to support the police in bringing this man to justice.’

Little wonder there are growing concerns that Uber’s aggressive expansion could be jeopardising passenger safety.

MPs and unions are warning that new drivers are exploiting legislative loopholes to sidestep measures intended to safeguard the public, such as installing CCTV cameras in the back of cabs.

Questions have also been raised about whether pressure on Uber drivers to maximise their earnings is leading to them lending their vehicles to other drivers — so passengers have no idea who may be driving them home late at night.

Some will see such criticisms as sour grapes, whipped up by those who lost out after the Californian company launched its services in London in 2012.

The firm runs a smartphone app that allows users to hail a minicab at the tap of a screen using location software in the passenger and driver’s phones.

Weeks later the vetting process for thousands of drivers offering the under-fire service was declared invalid, after TfL decided minicab firms had to use its chosen contractor to apply for a DBS check.

Mayor of London Sadiq Khan previously said he did not let his teenage daughters use the app.

Uber also came under fire for the way in which drivers were treated amid calls to pay them minimum wage.

Uber does not class drivers who use the app as employees but as self-employed, meaning they are not legally entitled to the minimum wage, sick pay or holiday pay.

In April, the firm announced plans to offer sick pay but it later emerged those interested would have to pay £2 a week for basic cover.

Black cab drivers across the capital have also taken issue with Uber.

They have previously accused the firm of dominating their trade since the app launched in London in 2012.

Hundreds of the city’s cabbies have held protests at Whitehall and outside Uber’s HQ over “deregulation” of the trade, highlighting the threat to passenger safety.

In February, a fresh row erupted when the company offered cabbies a year’s free trial of the app to attract more customers.

Uber argues that instead of restrictions on its business, “unnecessary burdens” on black cabs should be cut.

What have Uber said?

Tom Elvidge, General Manager of Uber in London, said: “3.5 million Londoners who use our app, and more than 40,000 licensed drivers who rely on Uber to make a living, will be astounded by this decision.

“By wanting to ban our app from the capital Transport for London and the Mayor have caved in to a small number of people who want to restrict consumer choice. If this decision stands, it will put more than 40,000 licensed drivers out of work and deprive Londoners of a convenient and affordable form of transport.

“To defend the livelihoods of all those drivers, and the consumer choice of millions of Londoners who use our app, we intend to immediately challenge this in the courts.

“Drivers who use Uber are licensed by Transport for London and have been through the same enhanced DBS background checks as black cab drivers.

“Our pioneering technology has gone further to enhance safety with every trip tracked and recorded by GPS. We have always followed TfL rules on reporting serious incidents and have a dedicated team who work closely with the Metropolitan Police.

“As we have already told TfL, an independent review has found that ‘greyball’ has never been used or considered in the UK for the purposes cited by TfL.

“Uber operates in more than 600 cities around the world, including more than 40 towns and cities here in the UK. This ban would show the world that, far from being open, London is closed to innovative companies who bring choice to consumers.”