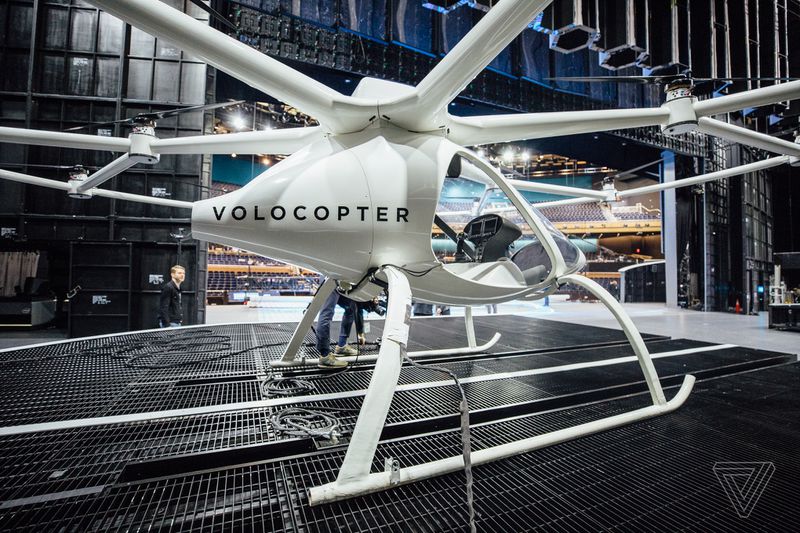 Regardless of whether you believe “flying cars” will become a legitimate way to get around, there’s no doubting that people around the world are in love with the idea. There’s always been something inherently cool about the idea of skipping across the sky in a personal vehicle.

That’s why Intel capped its keynote address at this year’s CES by letting an 18-rotor air taxi prototype (octadecacopter?) known as the Volocopter VC200 fly across the stage, albeit briefly.

This was the first time it flew in North America, in fact. No, the Volocopter is not quite a “flying car” as much as it is a “gigantic drone that you can sit in.” But even that’s still cool.

Intel could use some of that cachet. Its image has been scuffed by the recent Meltdown and Spectre security issues, as well as the questions surrounding a sell-off of shares by CEO Brian Krzanich.

But even if you push that aside, the company is locked in an ongoing, white-knuckle battle with Nvidia that spans across a vast set of technologies, many of which involve moving people around in futuristic ways. The wounds are fresh, too: one night before Intel’s keynote, Nvidia added Uber and VW to a list of transportation customers and partners that stretches into the hundreds.

So bringing Volocopter, a 50-person aviation startup from Germany, to CES — and America — for the first time ever is a way for Intel to step up and say, “Hey, look at this cool thing we’re working on!” 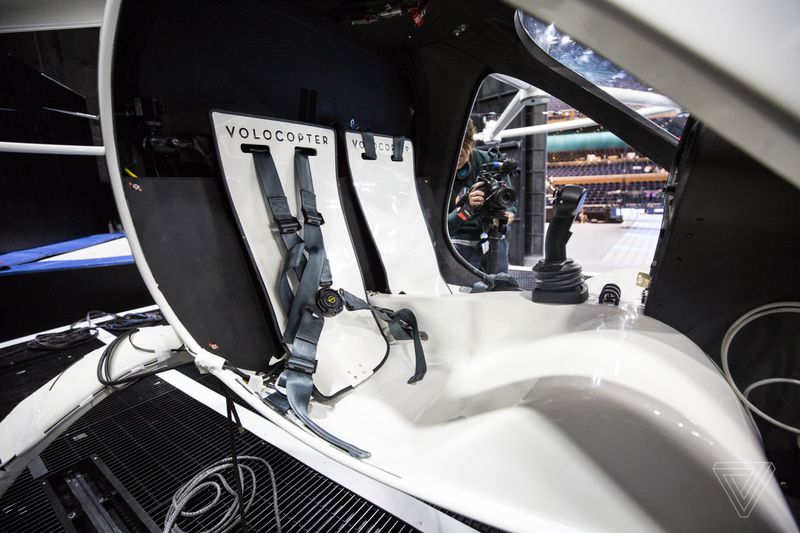 “What Intel sees in this technology is an enabling of a whole new market, with different segments and different partners,” Jan Stumpf, the chief of architecture for Intel’s drone group, says. “But Volocopter is of course now our biggest and most important one.”

Intel didn’t pick Volocopter out of a folder marked “buzzy vertical take-off and landing startups.” The tech company has been working with the German aviation startup for a while now. It’s only now at CES that the two sides are publicizing the partnership.

Once known as E-volo, Volocopter isn’t exactly a new kid on the flying taxi block. In fact, we covered the company’s first ever flight on the second day of The Verge’s existence. The company has pumped out a handful of videos over the last few years of the first test flights and demos of the prototype, the Volocopter VC200, in action. It recently followed that with the Volocopter 2X, a more polished version that’s supposed to be company’s first true production vehicle. (Intel also showed a video of Krzanich flying in the 2X during the keynote.)

The Volocopter 2X features a flight time of 30 minutes and a maximum range of 17 miles, though Volocopter says the batteries can be quickly swapped to compensate for those numbers until the tech improves.

Volocopter’s made strides to shore up its business before it announced this partnership with Intel. Last summer, Volocopter locked down a $30 million investment from fellow German automotive giant Daimler; a few months later, the company announced a multiyear partnership with the transit authority in Dubai to test its air taxis. The goal there is to launch a commercial pilot program in the early 2020s.

Intel works on and with myriad drones, but it saw Volocopter as a way to test that technology on a much bigger scale, says Anil Nanduri, the drone group’s vice president and general manager.

“When you’re talking about [scaling this technology] up to flying transportation, you are now looking at sensors that need to processes huge amounts of data,” he says. “But what’s most important, it needs to be safe.”

Right. No one will want to get into a Volocopter if there’s a remote chance that it will come crashing down. So one of the things Intel helped the startup with was building enough redundancy into the vehicle so that it can stay afloat in the face of multiple failures.

For example, the Volocopter uses four IMUs, or inertial movement units, which constantly measure and determine the vehicle’s attitude and positioning during flight. The battery system is split up into nine discrete packs, with each one powering a pair of rotors, so that the vehicle can still fly if one or two battery packs fail. The GPS and navigation systems are dual-redundant. Worst comes to worst, there’s a ballistic parachute in the top of the Volocopter that will deploy, letting the air taxi return to the ground with its passengers intact.

SO EASY TO FLY, “YOU COULD PUT A FIVE-YEAR-OLD IN HERE”

“In a traditional helicopter, if one single component along the entire drivetrain fails, you are in deep trouble,” Volocopter CEO Florian Reuter says. “We’ve pretty much traded in the entire mechanical complexity of today’s helicopters for electronic complexity, which is far more lightweight, far more powerful, and far cheaper today. And we think this vehicle can be constructed in a way that is as safe as a commercial airliner, which is where it needs to be in order to be applied at scale in megacities across the world.”

Reuter, Stumpf, and Nanduri all say that electric motor technology also make the Volocopter much easier to fly.

Nanduri boasts that it’s “so easy” I could fly it, a comment I’m still trying not to be offended by. (I asked multiple people, but haven’t been offered the chance — yet.) Reuter takes it even farther. “It is so intuitive to fly that you could put a five-year-old in here, without any explanation, and it will know how to maneuver this vehicle,” he says.

The budding air taxi market is flooded with major names like Uber and Airbus, and Volocopter’s not the only startup to pull in millions of dollars in funding. Working with Intel helps Volocopter stand shoulder to shoulder with these competitors, according to Reuter.