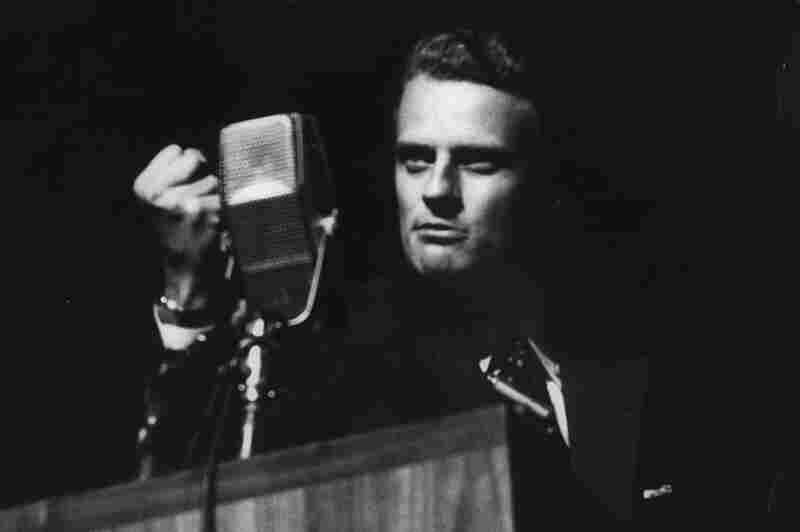 Five Mexican Pastors Say That Billy Graham Destroyed Their Churches and Twelve Years of Work in One Night!

From the author Sould Refuge , he writes that Christians and Pastors have been warning the Billy Graham Evangelistic Association (BGEA) for decades regarding his apostasy, and compromise with issues such as the FALSE gospel of the Roman Catholic Church.

The SAD thing is that the warnings appear to have fallen upon deaf ears.

Here is an excerpt from the book “Smokescreens” which was written more than 30 years ago by Jack Chick:

“A few years ago, 5 pastors from Mexico came to see me, asking for help. They told me I must talk to Billy Graham. I told them that was impossible, I was just a little tract publisher. Then they told me Billy Graham had destroyed their churches. They said he held a crusade, and told all those who had received Christ to go back to their original churches and win those people to Christ. The pastors told me their people followed Billy’s instruction and all went back to the Roman Catholic system. Twelve years of work destroyed in one night.”[Smokescreens, Chick Publications, 1983 by Jack Chick page 58]

This is just a small excerpt from that book by Jack Chick and I publish this to make you aware of what has been happening for decades in the modern day compromising church. I became a Christian in 1989, and I worked as a counselor, along with my wife Cathy, at the Billy Graham Crusade in 1991 in Central Park in New York City.

After the message was delivered by Billy Graham, people were instructed to raise their hands if they wanted more information, and the counselors would help them in filling out their decision cards. Cathy helped a woman fill out her card and the woman wrote down the name of her local Roman Catholic Church, to which she would be sent back. Cathy felt horrible, and needless to say we started speaking out and warning others about the deception in the Billy Graham ministry. We have spoken to many Christians over the years, including many pastors and the reaction seems to be pretty much the same. People simply are not interested in hearing what you have to say. There is a sort of glaze that comes over their countenance that is almost demonic. It is as if they cannot deal with the truth that a person so well known as Billy Graham could possibly be wrong.

The Trojan Horse Of False Unity

The call of the modern day “church” is for unity, and people believe that you are destroying the unity of the body of Jesus Christ when you speak out against the compromisers of today.

There is in fact a TRUE unity, and that unity is in Jesus Christ alone. A person is not even a member of the TRUE body of Christ, until, and unless, they have been born again of the Spirit of the living God. [John 3:1-8] What does that mean? I will tell you what that means. That means a person who has never become a new creation in Jesus Christ, by way of the new birth, is as lost as the worst criminal on planet earth. That is the Gospel truth. A person without the Holy Spirit does not belong to God!

I did not have the Spirit of Christ while I was in the Roman Catholic Church. They teach their people that a person is born again at baptism, and they talk about the sacrament of Confirmation as marking the Christian with the seal of the Holy Spirit and clothing him with the power from on high. I speak from experience and I assure you that I did not receive any power, nor did I receive Christ at the sacrament of Confirmation. Why? Simply because the Lord was not, and cannot, be involved with such false teaching. I received the sacrament of baptism inside the Roman Catholic Church, as well as the sacrament of Confirmation, and I received no power and no seal of the Holy Spirit. I did not receive the Holy Spirit until I heard the word of God preached in truth from the Bible, and I believed it. I knew then that God was real, and I knew that Jesus Christ died on the cross for my sins, and that I had been justified by HIS BLOOD! [Romans 5:6-10].

I  also realized that I was sitting under the sound of a false Gospel in the Roman Catholic Church. It was the Holy Spirit (of truth) who opened my eyes, and He will open your eyes also. The Holy Spirit is also known as the Spirit of truth, and He is the one (a person, not a force) who will guide us into all truth.

‘Howbeit when he, the Spirit of truth, is come, he will guide you into all truth: for he shall not speak of himself; but whatsoever he shall hear, that shall he speak: and he will shew you things to come. He shall glorify me: for he shall receive of mine, and shall shew it unto you’.  – (John 16:13-14)

It is that same Spirit of truth that yanked my wife Cathy and I out of the deceptive and false system of Roman Catholicism, and that is why I continue to speak out against Rome to this day. Many have been seduced by the trojan horse of false unity. They listen to“smooth talking” preachers who appear to be loving, but they end up promoting a false gospel in the process. They are able to get over on most of the people in their congregations, and a few might see the deception, but rarely will they utter a peep, for fear of being put out of the “church.” So here I am preaching the true Gospel, and warning others to flee from that FALSE CHURCH, and the airwaves are FILLED with the modern day WOLVES, who are working hand in hand with them!

Now the Spirit speaketh expressly, that in the latter times some shall depart from the faith, giving heed to seducing spirits, and doctrines of devils; (1 Timothy 4:1)

For the mystery of iniquity doth already work: only he who now letteth will let, until he be taken out of the way. And then shall that Wicked be revealed, whom the Lord shall consume with the spirit of his mouth, and shall destroy with the brightness of his coming: Even him, whose coming is after the working of Satan with all power and signs and lying wonders, And with all deceivableness of unrighteousness in them that perish; because they received not the love of the truth, that they might be saved. And for this cause God shall send them strong delusion, that they should believe a lie: That they all might be damned who believed not the truth, but had pleasure in unrighteousness. (2 Thessalonians 2:7-12)

FRANKLIN GRAHAM is now the head of the BGEA ministry and he is continuing in his father’s footsteps. He told the Indianapolis Star that HIS FATHER’S ECUMENICAL ALLIANCE WITH THE CATHOLIC CHURCH and all other denominations

“In the early years, up in Boston, the Catholic church got behind my father’s crusade. That was a first. It took back many Protestants. They didn’t know how to handle it. But it set the example. ‘If Billy Graham is willing to work with everybody, then maybe we should too’” (The Indianapolis Star, June 3, 1999). [excerpts From wayoflife.org]

At an August 2014 Franklin Graham Evangelistic event in Pittsburgh, PA a Roman Catholic Priest was invited to join them onstage to lead them all in prayer.

Do not be surprised by this stuff folks because it has been going on for many decades now.

I was set free from the false and demonic gospel of the Roman Catholic church, and the Graham organization works hand in hand with them, without missing a beat. The church of Rome is filled with so many false doctrines that it is not even funny. Most “Christian” leaders across the world simply pat the Graham’s on their back, and tell them how wonderful they are, without EVER addressing the FALSE gospel of Rome. Those same leaders will even DEFEND the Graham ministry, before they DEFEND the Gospel of Jesus Christ!We must remember that apostasy has also been prophesied about in the Bible, and the Graham organization, and countless other ministries, are simply flowing along with the scriptures! I encourage YOU to read “Foxe’s Book of Martyrs” and compare theFAITHFULNESS of those Christian Martyrs who stood against the Roman Catholic church, to the APOSTASY of the Billy Graham Evangelistic Association over the last several decades.

I pray that the true and living God would open your eyes, and that YOU would not remain silent any longer.