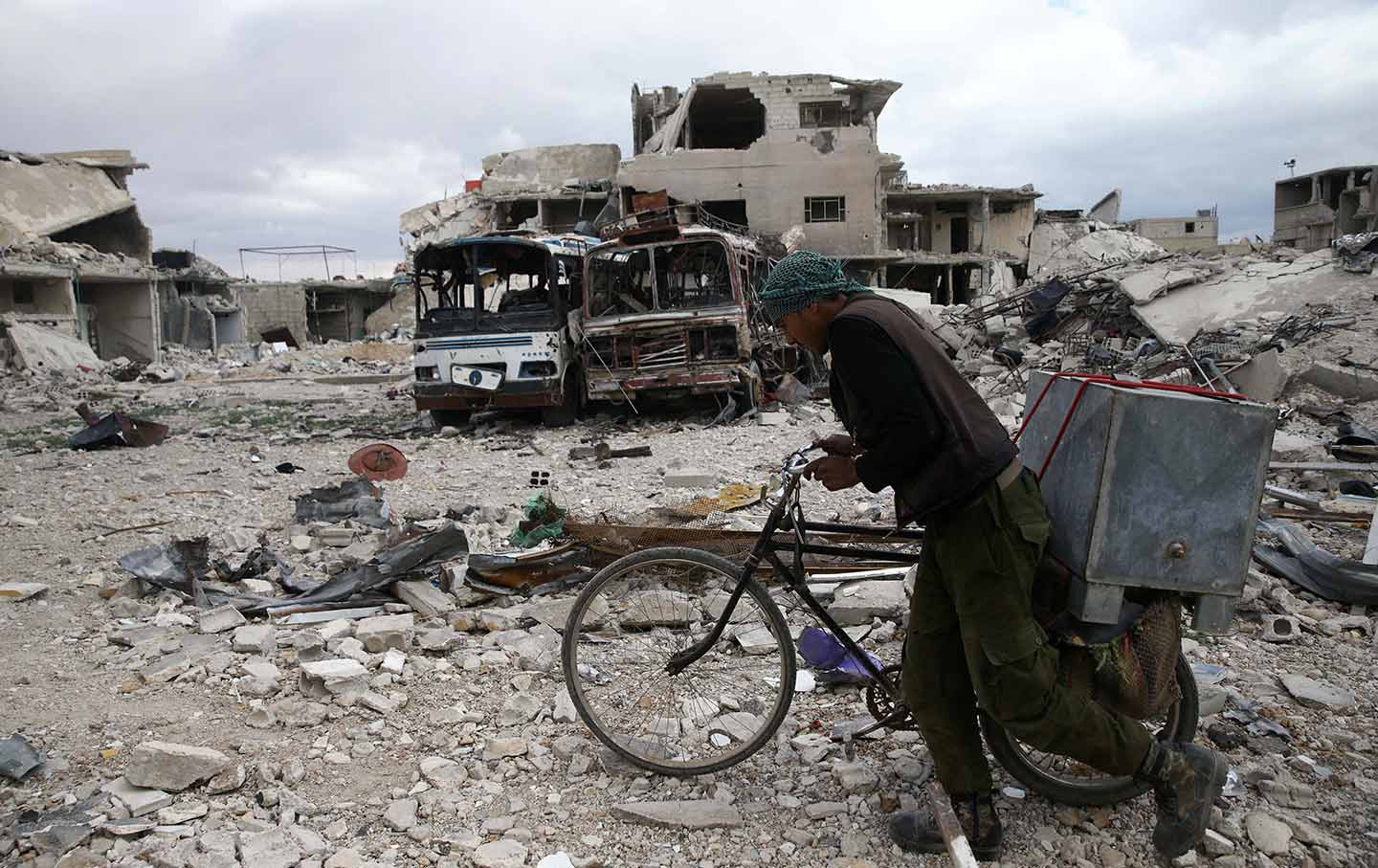 THE HAGUE: Experts from the world’s global chemical arms watchdog are continuing their mission to probe an alleged gas attack in Douma despite Western air strikes in Syria, the body said Saturday.

The Organization for the Prohibition of Chemical Weapons has been “working in close collaboration” with UN security experts “to assess the situation and ensure the safety of the team,” it said.

It vowed in its statement that the fact-finding mission due to go to Douma later Saturday “will continue its deployment to the Syrian Arab Republic to establish facts around the allegations of chemical weapons use in Douma.”

The United States, Britain and France carried out a wave of strikes against the Syrian regime on Saturday a week after the suspected deadly gas attack on the rebel-held Damascus suburb of Douma, in which 40 people were said to have been killed.

In the biggest foreign military action so far against Syria’s regime, Western officials said a barrage of cruise and air-to-land missiles hit targets near Damascus and in Homs province including a scientific research center, storage facilities and a command post.

Syrian state media reported that internal security forces had entered Douma on Saturday and that the town would be secured within hours.

Both Syria and its ally Russia have said they would guarantee the safety and security of the OPCW mission — the first outside Damascus since 2014.

UPDATE: Friday night’s US and allied air strikes against three apparent military sites in Syria were the inevitable denouement of a week’s worth of threats, taunts, bullying, and more threats.

There is still a huge amount of information we don’t know: Were there casualties? Who were they? Were any of them civilians?

Are the Pentagon reports of what installations were hit, what buildings destroyed, etc., accurate? That’s only the beginning—what we don’t know about what happened. The broader set of things we don’t know all involve what comes next.

The Pentagon spokeswoman and the general speaking for the Joint Chiefs of Staff said this was a “one shot” deal, and now it’s over. In fact we don’t know whether it’s over. Because the danger of all military actions—even those that might attempt and even those that succeed at being narrowly targeted, focused, and without “collateral” casualties, can and often do have consequences that go far beyond intention.

At this moment, it is crucial that we not turn away, breathing a sigh of relief that what we saw last night was not a full-scale “shock and awe” attack. Last night’s air strikes were launched in violation of US law and international law.

Claiming they aimed to defend another aspect of international law does not make those air strikes legal. And crucially, they did nothing to help bring the seven-year-old Syrian wars—the civil war matched by at least 10 other regional, sectarian, and global conflicts all being fought to the last Syrian—to an end. That is the real mission that needs to be accomplished. Ending the war is what will make Syrians safer. Bringing more air strikes, more violence, to that devastated country, will not. And diplomacy—powerful, engaged, determined diplomacy—and not war, is still the only way to make that happen.

Donald Trump’s campaign-era neo-isolationism is long over. He seems to want a war now, and if he can’t have one with North Korea because the pesky possibility of a diplomatic solution got in the way, Syria will do, and the recent alleged chemical-weapons attack by Bashar al-Assad’s army on the city of Douma, near Damascus, seems to have provided the pretext.

But war with Syria means the potential for war with Iran, and even with nuclear-armed Russia—so this is serious.

And it’s not just talk. Trump has been assembling a war cabinet and recruiting security advisers—John Bolton, Mike Pompeo, Gina Haspel—known for choosing war over diplomacy and torture over international law.

Trump has been conducting foreign and domestic policy by tweet for some time; now he’s even flip-flopping by tweet. First it was the threat that “Animal Assad” would pay the biggest price for the Douma attack. Then, after a Russian diplomat said that Moscow would shoot down any missiles heading for Syria, Trump tweeted, “Get ready Russia, because they will be coming, nice and new and ‘smart!’” He warned that a decision would come in 24–48 hours, then pulled back to threaten an attack that could be “very soon or not so soon at all!”

The shift from imminent to “let’s wait” might be driven by efforts to get France and Britain—whose leaders are champing at the bit to join Trump’s crusade but whose parliaments are appropriately wary—on board. Less likely is the possibility that the White House is actually waiting for information from chemical-weapons inspectors.

Far more significantly, all of these threats are taking place before we know what actually happened in Douma.

Days after reports of a chemical-weapons attack surfaced on April 7, Defense Secretary James Mattis admitted that the Pentagon was “still assessing” the claims. They still didn’t even know what chemicals, if any, were actually used.

As of April 12, five days later, the Organization for the Prohibition of Chemical Weapons, the chemical-weapons watchdog with a UN mandate and the only internationally credible agency on this issue, announced that its team was heading to Syria and hoped to begin its investigation in Douma by April 14. If all goes well, we may get answers to at least some of the currently unknown questions: Were chemical weapons definitely used? What were they made of? How were they delivered? Who was impacted? We probably won’t learn who was responsible in the initial report—the OPCW’s mandate rarely includes that question.

The problem is, knowing what happened, or indeed even knowing who was responsible, doesn’t come with an obvious checklist of what to do about it. This is a classic “even if” situation: Even if we knew chemical weapons were used, and even if we knew who ordered them, that still doesn’t tell us how to respond in a way that would uphold international law, prevent future violations of the anti–chemical weapons treaty, hold the perpetrators accountable, and provide some modicum of justice to the victims. Accomplishing any, let alone all, of those goals would be a very tough lift.

But while we don’t know yet exactly what happened, what we do know already is what not to do. We must not violate international law, risk killing more Syrians, prolong rather than help end the war, undermine the international institutions that could someday help create real systems of accountability, or engage in the kind of escalation that could lead to a direct war between the two largest nuclear powers, the United States and Russia… and that’s just the list of actions already under discussion in the White House, and perhaps under way in the Mediterranean. We should not do any of them.

The fact is that the United States is already at war in Syria, and has been since August 2014.

There are at least 2,000 US troops already on the ground, and the United States, working with its Syrian Kurdish militia partner, has been conducting air and drone attacks against ISIS on an almost daily basis. That war has already killed plenty of Syrian civilians. According to the British monitoring group Airwars, US and US-backed coalition air and artillery strikes have likely killed between 3,940 and 5,937 Syrian civilians, maybe more, since August 2014.

Just two months into Trump’s presidency, in March 2017, three US-led air strikes attacked a school near Raqqa, killing 150 people, according to a UN war-crimes investigation. That was roughly five times the number acknowledged by the Pentagon, which said that dozens of militants, not civilians, were killed.

After the Douma attack, in what was reported in The Washington Post as a “somber tone,” Trump said, “we are very concerned when a thing like that can happen. This is about humanity. We’re talking about humanity. And it can’t be allowed to happen.” Chemical weapons are indeed horrifying, and they are legitimately singled out—along with other weapons, like cluster bombs, which the United States uses with impunity, or white phosphorus, an Israeli favorite in Gaza—for their particularly indiscriminate nature. But we cannot accept the hypocrisy of presidents, generals, diplomats, members of Congress from both parties, pundits, or anyone else who rages against a still-unconfirmed chemical attack, even as they remain silent about, or even in some cases applaud, the killing of Syrian and Iraqi civilians by US drones and bombers, of Palestinian journalists and children by US-armed Israeli sharpshooters, of Yemeni families by Saudi and UAE bombers refueled in midair by US Air Force pilots.

A US escalation in Syria—and that is what new US and allied air strikes would be, regardless of the claimed interest in deterring future chemical-weapons use—would be illegal, violating both US domestic and international law.

The Constitution makes clear that only Congress, not the president, can declare war. The War Powers Resolution allows a president to use military force on a very temporary basis without congressional approval only when one of three very specific criteria are met—an “attack upon the United States, its territories or possessions, or its armed forces”—none of which apply in Syria. The fact that Congress has in recent decades largely abandoned that right and allowed presidents to go to war without its consent does not make unilateral White House wars legal.

There are of course important exceptions. The Congressional Progressive Caucus issued a powerful statement in response to the chemical-weapons allegations, calling on President Trump “to immediately reverse his policy of denying protections to Syrian refugees fleeing violence. Syria’s civil war continues to be a complex regional conflict, and it has become increasingly clear that U.S. military interventions will likely add to the mass suffering in Syria.”

The CPC went on to recognize that the “past two decades of U.S. military intervention in the Middle East—including President Trump’s unauthorized airstrikes on Syria last year—only confirm the failure of this approach to advance humanitarian outcomes. The U.S. should instead redouble its efforts to engage our allies and enforce international prohibitions on chemical weapons diplomatically and ensure that proper investigations can proceed.” And, crucially, the congressional critics reminded the president “that any U.S. use of force must be authorized by Congress first, as required by the Constitution and the War Powers Resolution.”

In terms of international law, there is no legal justification for the current US troop presence in Syria, let alone additional air strikes. Anticipating that concern, Mattis told the House Armed Services Committee that attacking Syria would be justified as self-defense because the 2,000 US troops on the ground in Syria must be protected. What he ignored, of course, is that the self-defense exception to the UN Charter’s prohibition on any country’s attacking another does not apply to the illegal presence of one country’s soldiers in another country. American soldiers in Syria have not been attacked by Assad’s army, but even if they had been, self-defense does not apply. And even if it is proven that the Assad regime violated the chemical-weapons treaty in the Douma attack, no individual country has the right to enforce that treaty’s provisions or deter further violations. Such unilateral actions are also violations of international law. Equally important, they would do nothing to provide real justice or protection for the victims.

We are hearing from US Ambassador to the UN Nikki Haley words that resonate dangerously with those we heard at the UN Security Council back in 2002 and 2003, when the United States was trying to justify war against Iraq.

New US attacks on Syria will not protect the Syrian people. They will only kill more Syrians, threaten a direct US-Russian conflict, and undermine—not strengthen—international efforts to prevent the use of chemical weapons.

We still need diplomacy, not war.