Philippines President Rodrigo Duterte has said China will cross a red line if it unilaterally mines the natural resources of the South China Sea, according to the country’s Foreign Minister Alan Peter Cayetano.

“(Beijing) said some red lines, we said some red lines … The President has already said that. If anyone gets the natural resources in the Western Philippines Sea, South China Sea, he will go to war. He said, “Whatever happens, happens.” He will go to war,” Cayetano said.
Tensions in the hotly disputed region have risen in recent weeks, amid reports of the Chinese military landing bombers on their artificial islands for the first time.
Under Duterte, who took office in 2016, the Philippines has toned down its rhetoric towards China on the dispute. In April, he publicly declared that he “loved” Chinese President Xi Jinping.
It’s not clear whether the latest statement marks a tougher approach from Duterte, who’s been accused of being too lenient on the issue. Cayetano said China had been told of the “red lines.”
Manila is pursuing a joint exploration agreement with Beijing for oil and natural gas reserves in their claimed territory in the South China Sea.
Cayetano said during the speech his department was repeatedly told to “file a protest” over Beijing’s actions in the South China Sea. “We are taking all diplomatic actions at the right time,” he said.
But he said it was unfair to single out China for its advanced militarization in the South China Sea. “If there is more than one country militarizing, and it’s not only the islands, if huge navies are sailing through the area, is that not militarization?” he said. “So we don’t even have a definition of militarization.”

US Navy steps up

Cayetano’s speech came as the United States Navy sailed two warships within 12 nautical milesof China’s artificial islands in the Paracels, as part of their regular freedom of navigation exercises in the contested waters.
It was the first time more than one US vessel had been used in the exercises, according to experts, part of a recent escalation in US opposition to China’s action in the region. 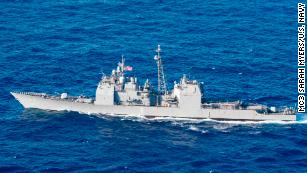 US sails warships past disputed islands in South China Sea
Beijing claims a huge swathe of territory across the South China Sea, known as the “nine-dash line,” from its southern Hainan province all the way down to the waters north of Malaysia.
To reinforce its claims to the territory, the Chinese government has built a series of artificial islands in the Paracel and Spratly Island chains, complete with radar facilities and airstrips.
The Chinese Foreign Ministry has repeatedly stated the territory in the South China Sea falls under Beijing’s jurisdiction, to do with as it pleases.
But Beijing’s position overlaps competing territorial claims from the Philippines, Vietnam and Taiwan, among others. An international tribunal ruled in 2016, in a case brought by the Philippines, that most of Beijing’s stated claims in the South China Sea were illegal under international maritime law.
To register its objection to Beijing’s growing militarization of its artificial islands, the United States military on May 23 disinvited China from biannual RIMPAC naval exercises.
“China’s behavior is inconsistent with the principles and purposes of the RIMPAC exercise,” a Pentagon spokesman said in a statement at the time.