A Marxist, militant, pro-LGBT antifa group is trying to shut down a Christian megachurch in Austin, Texas, apparently because of its biblical views on sexuality. Members of the Stonewall Militant Front (SMF) were joined by a dozen or so other gay rights activists who chanted, waved pride flags, and held signs over the weekend to protest Celebration Church because of its opposition to gay marriage.

The gay rights activists also protested the church’s Sunday morning services at the Austin school district performing arts center in order to criticize the district for renting the facility to Christian “homophobes.” 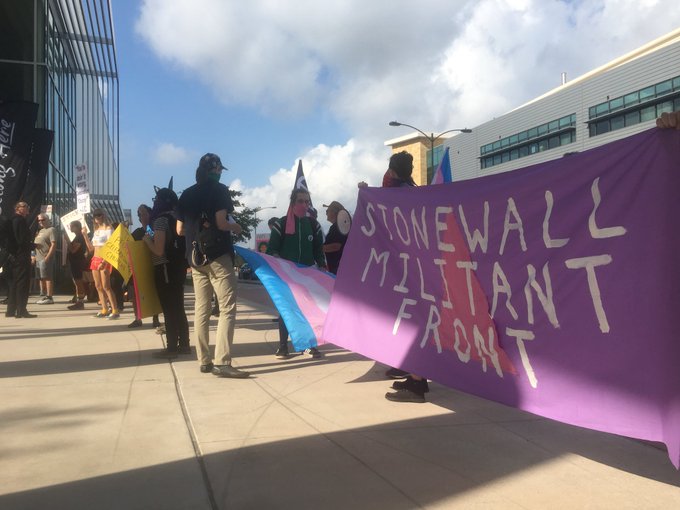 According to the far-left news site Incendiary News, “the church likened homosexuality and bisexuality to incest and bestiality on their website.”

But a visit to the non-denominational Celebration Church’s website shows no hostility toward gays. In fact, tolerance and inclusivity appear to be key components of their mission statement.

Celebration Church is about reaching all people with the life-changing message of Jesus Christ.

We welcome all people regardless of age, race, sexual orientation, religion or political beliefs. We also believe that every person must be afforded compassion, love, kindness, respect, and dignity. Hateful and harassing behavior or attitudes directed toward any individual are to be repudiated and are not in accord with the doctrines of the church.

Anyone seeking God and wanting to learn more of the teachings of Christ is welcome and will not be excluded from attending Celebration Church. We welcome all people.

Celebration Church Executive Pastor Jim Kuykendall told the Statesman that “the church believes in being welcoming and kind to all people regardless of sexual orientation, religion or political beliefs.”

He added that the church does, however, preach the word of the Bible. The church references Bible verses saying homosexuality, bisexuality and disagreeing with one’s biological sex is a sin.

“I think maybe the frustration may be that they feel like it’s our position when we say that the Bible says that certain things are the way they are and that it’s our statement,” Kuykendall said. “Its not our statement, it’s what’s in the Bible.”

Far-Left Watch reports that prior to the protest, SMF doxed the son of the church’s founder and pastor, sharing his name and picture on their Facebook page where other violent antifa groups could see it.

L.A. Antifa Group Calls for ‘Revolutionary Violence Against the Enemies of the People’