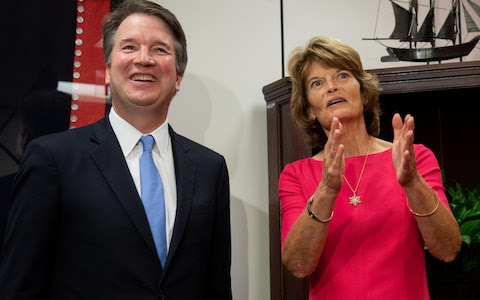 Brett Kavanaugh is all but certain to become the next Supreme Court justice after securing the backing of the majority of the US Senate.

Senators voted 51 to 49 to advance his candidacy to a final, binding vote.

The so-called “procedural” vote, which brings an end debating time about his candidacy and pushes forward his confirmation, saw one Republican senator vote no but one Democrat vote yes.

Lisa Murkowski, the Republican senator for Alaska, voted against the motion and Joe Manchin, the Democratic senator for West Virginia, voted for it.

The 98 other senators all voted along party lines.  The result is good news for the White House, with a final decision on Mr Kavanaugh’s nomination due to be taken by senators in a vote as early as Saturday.

Three critical swing voters have announced they will vote confirm Mr Kavanaugh in the final vote, meaning a majority of the Senate is set to give the nomination their backing.

President Donald Trump tweeted: “Very proud of the US Senate for voting “YES” to advance the nomination of Judge Brett Kavanaugh!”

Republican senator Susan Collins, who had been wavering on her position, waited until Friday afternoon to announce she would confirm Mr Kavanaugh’s nomination.

Another key senator, Jeff Flake of Arizona, who has been a prominent critic of Mr Trump and steps down in January, also said he would vote yes on Saturday.

Mr Manchin, the only Democrat to have voted for Mr Kavanaugh, is facing re-election next month in West Virginia, a state which Mr Trump won comfortably in the 2016 presidential election.

Mr Kavanaugh’s nomination stoked controversy and bitter political debate after he was accused of sexual assault by three women, something he strongly denied.

Comedian Amy Schumer and model Emily Ratajkowski were among the 300 protesters who were arrested for illegally protesting inside Senate office buildings.

“The very rude elevator screamers are paid professionals only looking to make Senators look bad. Don’t fall for it!” Trump said on Twitter.

“Also, look at all of the professionally made identical signs. Paid for by Soros and others. These are not signs made in the basement from love! #Troublemakers”

The very rude elevator screamers are paid professionals only looking to make Senators look bad. Don’t fall for it! Also, look at all of the professionally made identical signs. Paid for by Soros and others. These are not signs made in the basement from love! #Troublemakers

Mr Kavanaugh, declared himself “independent, impartial” on Thursday in a highly unusual plea following criticism of his performance at a Senate committee hearing on the sexual assault allegations against him.

“I am an independent, impartial judge,” said the headline of an opinion piece he wrote in The Wall Street Journal.

Senator Susan Collins, who represents Maine, has announced she will vote to confirm Mr Kavanaugh’s nomination. In a speech which lasted around 45 minutes, the Republican senator discussed everything from health care and abortion issues to the sexual assault claims against the nominee. She ended by saying: “I do not believe these charges can fairly prevent Judge Kavanaugh” from being on the Supreme Court.

Democrat senator Joe Manchin has also confirmed he will vote yes in Saturday’s vote, saying “I had to deal with the facts that I had in front of me”.

There are now 51 senators set to vote in favour of Mr Kavanaugh – meaning he will be the next Supreme Court justice.

Republican senator Jeff Flake has said he will vote to confirm Mr Kavanaugh to the Supreme Court “unless something big changes”. Mr Flake’s announcement makes it all the more likely President Trump’s nominee will be successful.

Mr Kavanaugh’s family and friends were seen hugging and smiling as they left the Senate gallery after the vote.

Very proud of the U.S. Senate for voting “YES” to advance the nomination of Judge Brett Kavanaugh!

51-49 vote in favour of nomination

Senators have voted 51-49 in favour of advancing Mr Kavanaugh’s Supreme Court nomination to a final vote.

One crucial swing vote, Republican senator Susan Collins, voted yes to Friday’s procedural vote but said she will reveal her position on the final vote at 3pm ET.

Democrat Joe Manchin and Republicans Jeff Flake and Susan Collins voted yes to Friday’s procedural vote, allowing the nomination to go through to a final vote.

The Senate has begun a key procedural vote on Brett Kavanaugh’s Supreme Court nomination, with 51 votes needed for it to advance. However a procedural vote does not guarantee Mr Kavanaugh’s position on America’s highest court, it paves the way for a second final vote to take place tomorrow.

Ms Collins, Senator for Maine, says she will vote yes in Friday’s procedural vote. She said she will announce her decision on the final confirmation vote later on Friday.

Mr Manchin has said he will not decide until he enters the chamber to vote.

Mr Flake has said the FBI investigation into Mr Kavanaugh was “thorough”, suggesting he will vote in favour  of his nomination.

In his speech Chuck Schumer, the Senate Minority Leader, said Mr Kavanaugh was “a flawed nominee”.

The New York Democrat called it a “shameful culmination” of a process that started when Republicans refused to consider Merrick Garland, President Barack Obama’s nominee for a seat on the court.

Mr Schumer blamed Republicans’ “scorched earth tactics” as they try to put conservatives on the bench.

‘A man filled with anger and aggression’

Ms Feinstein said the judge’s previous rulings and statements show he is “pro gun” and a threat to Roe v Wade, the landmark Supreme Court ruling which made abortion legal across the US.

The majority of Ms Feinstein’s speech focused on his testimony before the Judiciary Committee which she called “shocking”.

The California Democrat said that the judge’s behaviour showed “a man filled with anger and aggression”, revealing a temperament and lack of impartiality that’s unbecoming for the high court.

Speaking in the Senate this morning Chuck Grassley, chair of the Judiciary Committee, gave a passionate defence of Mr Kavanaugh’s “impeccable reputation”. He attacked Democrats for impugning Mr Kavanaugh’s character.

“The conduct of left wing, dark money groups in this body has shamed us all,” he said.

Mr Grassley urged his colleagues to say no to “mob rule” and vote to move Mr Kavanaugh’s nomination forward.

The senator praised the nominee’s impeccable academic credentials, saying in a previous era such a highly qualified nominee would have received unanimous support in the Senate.

Mr Grassley added that an FBI investigation “found no hint of misconduct” and said political attempts to sully the judge’s reputation was “nothing short of monstrous.”

The chairman of the Senate Judiciary Committee says the FBI interviewed 10 people while investigating sexual misconduct claims against Mr Kavanaugh and found no corroboration of the allegations.

Senator Chuck Grassley’s statement provided the first official list of those interviewed by the FBI.

What happens if the vote fails?

Sen. Bob Corker tells me that if this cloture vote today on Kavanaugh fails — a vote to advance the process — “it’s over.”

“If we don’t get cloture, it’s over,” he says, when asked about the fate of the nomination. “I don’t know what they do after that.”

Senate Majority Leader Mitch McConnell says he’s “feeling good” ahead of a crucial Senate vote to advance the nomination of Brett Kavanaugh to the Supreme Court.

Mr McConnell has little room for error in the narrowly divided Senate with a 51-49 GOP majority. The Senate is set to vote at 10:30 a.m.

Republicans can rely on Vice President Mike Pence to break a tie, but that has never happened for a Supreme Court nominee, according to the Senate Historical Office.

David Millward in Maine writes: A raft of leading writers, including Stephen King and Richard Russo, have urged Susan Collins, Maine’s Republican senator who has yet to announce which way she will vote, not to support Mr Kavanaugh.

In a signed letter to the Portland Press Herald, they write:

“Putting aside for the moment the possibility that Brett Kavanaugh was a sexual predator in his youth, he is still unfit to be on the Supreme Court. In his recent testimony to Congress, he showed himself to be untruthful, temperamentally unsuited and driven by partisanship. Supreme Court justices need not be paragons, but they should tell the truth under oath, demonstrate a measure of emotional self-control and eschew political bias.

“His lies and self-serving exaggerations (words matter to us writers), as well as his snarling hostility toward women with the temerity to question him, don’t suggest a person who is deeply committed to the principles of fairness, or, for that matter, objective truth. Indeed, a magistrate on a county bench ought to be able to clear a bar as low as this one. The fact that Brett Kavanaugh couldn’t should be disqualifying. There are many viable, well-qualified candidates for this seat. To vote to confirm Kavanaugh, you would have to be confident that he wouldn’t abuse his power. Are you?”

How will the votes fall?

Republicans have a razor thin 51-49 majority in the Senate, meaning that if just two Republicans voted against  Mr Kavanaugh’s confirmation it would be defeated, providing the party’s political opponents all voted against it. Four key senators have yet to declare their position: Republicans Jeff Flake of Arizona, Susan Collins of Maine and Lisa Murkowski of Alaska, along with West Virginia Democratic senator Joe Machin.