SOTN Editor’s Note: The hard facts presented below tell the back story of this juvenile Democrat bombing conspiracy.

Jim Stone, Freelance Investigator Posted on October 27, 2018 by State of the Nation

The Mainstream Media’s fabricated narrative is so ridiculous it’s insulting to every American.

Here’s what really happened: FALSE FLAG BOMB SCARES: Who’s doing it and Why?

Does the Left really expect the Patriot Movement to believe this transparent false flag psyop?  How absurd is this obvious black operation designed to tar Trump with the brush of typical left-wing violence.

• The same Sheriff – Scott Israel, who is represented by Debbie Wasserman Schultz handled this bomber case, the Parkland shooting AND DRUM ROLL: . . . . .

FACT: THERE IS A TRIBE HIVE PROBLEM IN THE AREA OF FORT LAUDERDALE. THEY HAVE:

How convenient is it that

Oh, and Broward County seems to end up in the middle of a lot of vote rigging scandals also. THAT FITS.

BTW, how was the media there during the bomber arrest to photograph a van full of Trump stickers? Does the FBI call the media and say, there is going to be a great photo op moment, BE THERE??!!??

They also lightened his photo to make him look white, but he is not white.  The Left could not have possibly sunk lower. 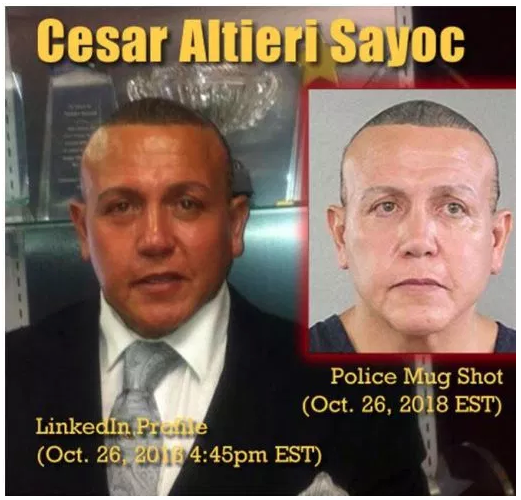 Look at the photos again – his name is Cesar Altieri Sayac. Where do you think his parents or grandparents were born?

He worked for Bernie Sanders’ campaign, but was a staunch Trump supporter with stickers all over his van in support of trump; all brand new stickers so he can be branded as the MAGA BOMBER.