Dead Men Tell No Tales in

Opening your mouth in Debbie Wasserman Schultz’s district has been proven to be quite hazardous to one’s health.

For decades, the county has regularly been a hot zone for election-night chaos in both statewide and national races, including the infamous 2000 presidential election.

Years of problems have only slapped additional coats of paint on the county’s sordid reputation as a black hole for ballots. Broward County Elections Supervisor Brenda Snipes, the target of Scott’s legal action, has been accused in recent years of illegally destroying ballots and mismanagement. –Washington Post

Below are the stories of 3 men who dared challenge the establishment and soon after paid with their lives.

Whisenant was a federal prosecutor that was murdered in 2017 while investigating voter fraud.

A federal prosecutor from the U.S. attorney’s office in Miami who happened to be investigating voter fraud has been found dead along a Hollywood Florida beach, and it’s being investigated as a homicide.

According to Hollywood police spokeswoman Miranda Grossman, although the “investigation is still very preliminary,” 37-year-old Beranton J. Whisenant Jr. likely suffered a head wound from a gunshot or other direct trauma. His body was found by a passerby washed up on the Hollywood beach shore south of Magnolia Terrace. It isn’t clear where the victim actually died.

For now, the FBI’s Miami office is referring all questions related to Whisenant’s death to Hollywood police, but if the death is found to be retaliatory or related to a case Whisenant was working on, standard procedure would mean the FBI and U.S. attorney’s office aggressively working together on the case.

News spread quickly on social media that Whisenant was involved in a recent fraud probe involving the DNC, though none of the news reports mentioned that as fact.

A graduate of the University of Florida law school, Whisenant has been a member of the Florida Bar since 2004, joining the U.S. attorney’s office in January 2017 in the major crimes section.

His office happens to be in Congressman Debbie Wasserman Schultz’s district.

Deputy Jason Fitzsimmons was the first of two Broward County Deputies to question the politicizing of the Parkland shooting by Democrats.

Both ended up dead, under intriguing and suspicious circumstances. Sunshine State News covered the story in April of this year:

Conspiracy theories have always turned me off, and I’m not posing one now — but doesn’t anyone else want to know what happened to Broward County Sheriff’s Deputy Jason Fitzsimons?

Deputy Fitzsimons, 42, described as “in an excellent state of mind and health,”  called in sick sometime April 1 and then died — his obituary read “unexpectedly.” Apparently he was found on his sofa.

That’s pretty much the extent of the death report.

I called the Sheriff’s Office and asked about him, was promised someone would get back to me, but no one ever did.

The rub about Fitzsimons is, his handiwork was all over social media after Feb. 14, questioning the motive behind the Marjory Stoneman Douglas mass shooting. He believed the tragedy was being used to promote the Democratic Party’s gun-control agenda, to gain traction in the upcoming election.

On one Facebook posting, he had included Douglas student-spokesman David Hogg Photoshopped to look like an SS officer, complete with the Nazi salute and swastika, above the caption, “We will March Until We Disarm Every American.” I was trying to reach Fitzsimons because I wanted to write a story on why he was challenging impassioned and grieving students so publicly, and frankly because he seemed like quite a character and great story fodder. 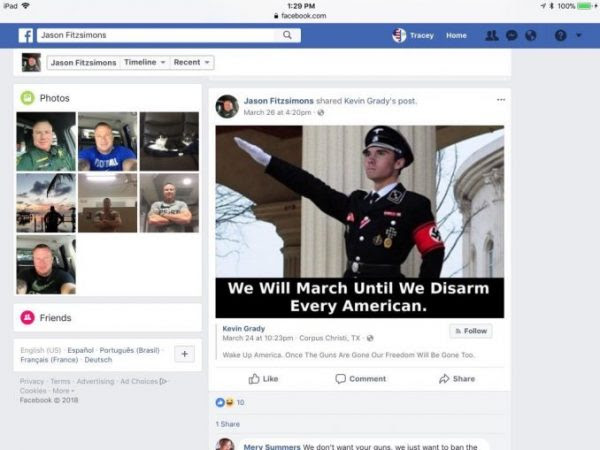 Another member of the Broward County Sheriff’s Department, also believed to be in excellent health was found dead about 3 weeks later at his Mother’s house.

Newspunch has the story:

According to the obituary notice, Marshall Lawrence Peterson was a “loving son, brother, brother-in-law, uncle and friend” who was a popular member of the Sheriff’s office, having served there since 1989. However the obituary does not state why the 53-year-old man, who was apparently in good health, was found dead at his mother’s house.

Deputy Peterson is the second Broward County deputy to be found dead within a month. They were both in the prime of their lives and they died from unspecified, non-job related causes. Unless you count “questioning the official narrative surrounding a highly publicized school shooting” to be a job related cause of death…

Let us not forget that Debbie Wasserman Schultz is not afraid to threaten law enforcement. She can be seen in this 2017 video threatening a police chief.

I’m not saying that Debbie Wasserman Schultz is behind any of this, but would it surprise you if she were?

The woman had the audacity to threaten a chief of police.

I think you’re violating the rules when you conduct your business that way and you should expect that there will be consequences.

One thing is for certain.

Opening your mouth in Debbie Wasserman Schultz’s district has been proven to be quite hazardous to one’s health.