Police officers were beaten by migrants in a train station and an ambulance window was shattered by a projectile while passing through a ‘no-go zone’ in Brussels, according to local media.

Migrants squatting in the Brussels North Station responded with violence after being asked to clean up their mess by railway security personnel, and four police officers responding to the scene were injured, SCEPTR reports.

“There was an incident after a Securail employee asked them to clean up the garbage,” an official said. “Then there was a skirmish with people sleeping in the station.”

Officers sustained “dozens of blows” from attackers in the melee.

“We are asking for staff to be strengthened and given the means to defend themselves in such circumstances,” said union representative Philippe Dubois. “The pepper spray that they now have is inadequate. Political leaders must also take the necessary measures to ensure that the North Station does not turn into a refugee camp.”

Many migrants are reportedly relocating from nearby Maximilian Park to the transit station as winter weather arrives.

“Now that it is getting colder, the illegal immigrants flock to the covered north station, near the Maximilian Park,” SCEPTR reports. “There they cause a great deal of nuisance – there is a mountain of waste and excrement – but above all a lot of crime. The number of thefts rose by as much as 82% and there is reportedly at least one stabbing incident every day.”

Brussels government employees were recently warned to avoid Maximilian Park after a slew of robberies and attacks upon officials walking through the park, in which hundreds of migrants are known to loiter and sleep. 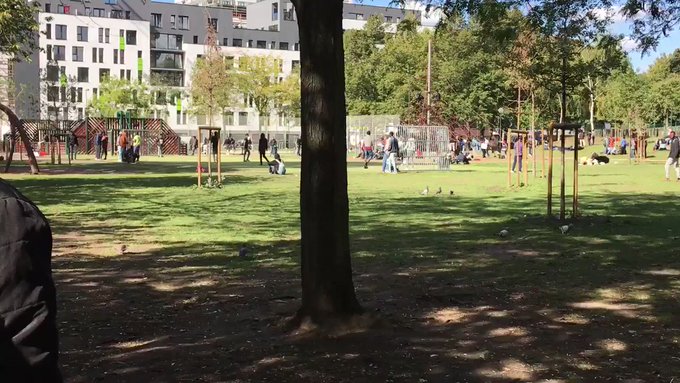 Also, in a separate incident this week, an ambulance rushing to respond to an emergency call near the Brussels Christmas market was allegedly hit by gunfire, according to the fire department.

While traveling through a neighborhood referred to by some officials as the “Chicago of Brussels,” paramedics were rocked by a projectile that shattered a side window of their vehicle.

Trade union representative Eric Labourdette maintains that the damage was likely caused by a firearm, and warns that such incidents are becoming more common.

“The world is really going crazy,” Labourdette said. “Even in a war zone there is a treaty that emergency services are not shot at. This makes it very difficult to exercise our profession properly. There is a lack of respect towards people in a uniform and the violence is only increasing.”

“Among the staff it is already said that this district has become the ‘Chicago’ of Brussels, but there are other places in the capital and other metropolises where such troubling incidents occur. This creates no-go zones.”

As Infowars Europe reported last week, there are now over 1,400 locations across England that have been red-flagged as ‘no-go zones’ for ambulances without police escort, as the rate of violent attacks on paramedics has risen to a staggering eight per day.