Who knows that spending time with God, reading His word and praying according to His heart and will, can be challenging, if not difficult.

This morning the Lord showed me some things from Joshua 5:

5 And it came to pass, when all the kings of the Amorites, which were on the side of Jordan westward, and all the kings of the Canaanites, which were by the sea, heard that the Lord had dried up the waters of Jordan from before the children of Israel, until we were passed over, that their heart melted, neither was there spirit in them any more, because of the children of Israel.

2 At that time the Lord said unto Joshua, Make thee sharp knives, and circumcise again the children of Israel the second time.

3 And Joshua made him sharp knives, and circumcised the children of Israel at the hill of the foreskins.

4 And this is the cause why Joshua did circumcise: All the people that came out of Egypt, that were males, even all the men of war, died in the wilderness by the way, after they came out of Egypt.

6 For the children of Israel walked forty years in the wilderness, till all the people that were men of war, which came out of Egypt, were consumed, because they obeyed not the voice of the Lord: unto whom the Lordsware that he would not shew them the land, which the Lord sware unto their fathers that he would give us, a land that floweth with milk and honey.

7 And their children, whom he raised up in their stead, them Joshua circumcised: for they were uncircumcised, because they had not circumcised them by the way.

8 And it came to pass, when they had done circumcising all the people, that they abode in their places in the camp, till they were whole.

9 And the Lord said unto Joshua, This day have I rolled away the reproach of Egypt from off you. Wherefore the name of the place is called Gilgal unto this day.

10 And the children of Israel encamped in Gilgal, and kept the passover on the fourteenth day of the month at even in the plains of Jericho.

11 And they did eat of the old corn of the land on the morrow after the passover, unleavened cakes, and parched corn in the selfsame day.

12 And the manna ceased on the morrow after they had eaten of the old corn of the land; neither had the children of Israel manna any more; but they did eat of the fruit of the land of Canaan that year.

13 And it came to pass, when Joshua was by Jericho, that he lifted up his eyes and looked, and, behold, there stood a man over against him with his sword drawn in his hand: and Joshua went unto him, and said unto him, Art thou for us, or for our adversaries?

14 And he said, Nay; but as captain of the host of the Lord am I now come. And Joshua fell on his face to the earth, and did worship, and said unto him, What saith my Lord unto his servant?

15 And the captain of the Lord‘s host said unto Joshua, Loose thy shoe from off thy foot; for the place whereon thou stand is holy.

And Joshua did so.

The church on Lafayette Street is a total loss. A witness says lightning struck the 180-foot steeple before it went up in flames.

“I saw the lightning strike the steeple, and we saw the smoke and it just went up in flames fast,” said Christian Bruno, who lives across the street.

The church caught fire around 7:00 p.m. Tuesday night. Witnesses say the flames spread fast and many watched as the top of the steeple fell.

The fire was so intense the heat could be felt even a few streets over.

Robert Jordan was worshiping at the church on Sunday. He rushed down when he heard about the fire. “Two days ago I just went to the service 10:15 on Sunday and I’m just shocked that this church is burned down,” Jordan said.

Dozens of people filled the streets of downtown Wakefield to watch as crews put out the flames at the 150-year-old church.

The Fire Chief says there was a class going on in the church at the time but everyone was able to get out safely. No injuries have been reported.

The lightning strike occurred during an intense period of violent weather. A tornado was confirmed in Lincoln, Rhode Island earlier in the day. 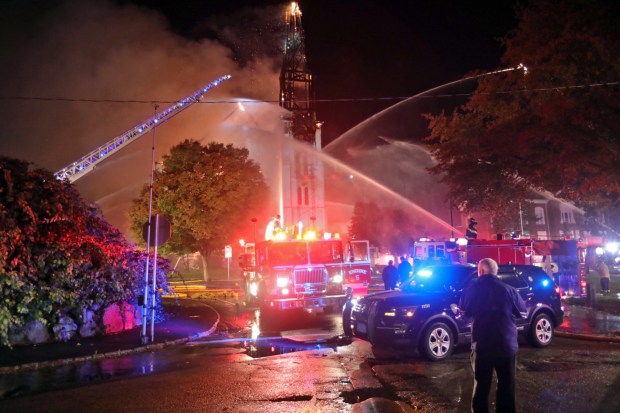 The heat from the massive fire that destroyed First Baptist Church in Wakefield, Massachusetts, on Tuesday night could be felt from several streets away, witnesses told reporters.

The flames turned the picturesque white church into char, leaving church members weeping at the scene, “gathered in disbelief,” described the Boston Globe.

“I saw the lightning strike the steeple, and we saw the smoke and it just went up in flames fast,” Christian Bruno, who lives across the street, told CBS Boston.

But something carried out of the ashes, something the hungry fire did not consume, awed church members and scores of people who have heard the story through media reports.

The painting of Jesus that hung inside the front door of the church was unharmed, a mystery that has become the headline of this story.

[Please understand its not the painting – but what or who it represents. Nothing is left but Jesus]

A lightning strike reportedly ignited a massive inferno Tuesday night at the 150-year-old First Baptist Church in Wakefield, Massachusetts, destroying almost everything inside — but amid the rubble,…

Although I believe Jesus didn’t look like this – this is still amazing https://www.wsbtv.com/news/trending-now/jesus-painting-survives-fire-that-destroyed-150-year-old-church/859451758 …

This might not be as miraculous as turning water into wine, but it’s close.

“It’s a beautiful sign of hope and a reminder that Jesus is with us,” church member Maria Kakolowski told Boston 25 News.

“I’m personally just taking it as a sign and a reminder that the Jesus, the Christ that we serve, is still alive. And even though our church building is gone, our church is here and the God that we serve is still here.”

The 1872 church was both a house of worship and education, home of the Tall Spire Nursery School that had educated several generations of children, according to the Globe.

Michael Sullivan, the town’s fire chief, told the newspaper the fire caused about $1 million in damage. Some of the 100 or so firefighters who fought with the flames suffered minor injuries, Sullivan told the newspaper.

“Our faith is one of hope and resurrection, and we believe that we can rise from the ashes and joy comes in the morning,” the church’s pastor, Norman Bendroth, told WCVB in Boston.

Church members were expected to gather on Wednesday to decide their next move.

The painting of Jesus, the Globe reported, will be given to one of the church’s former pastors.