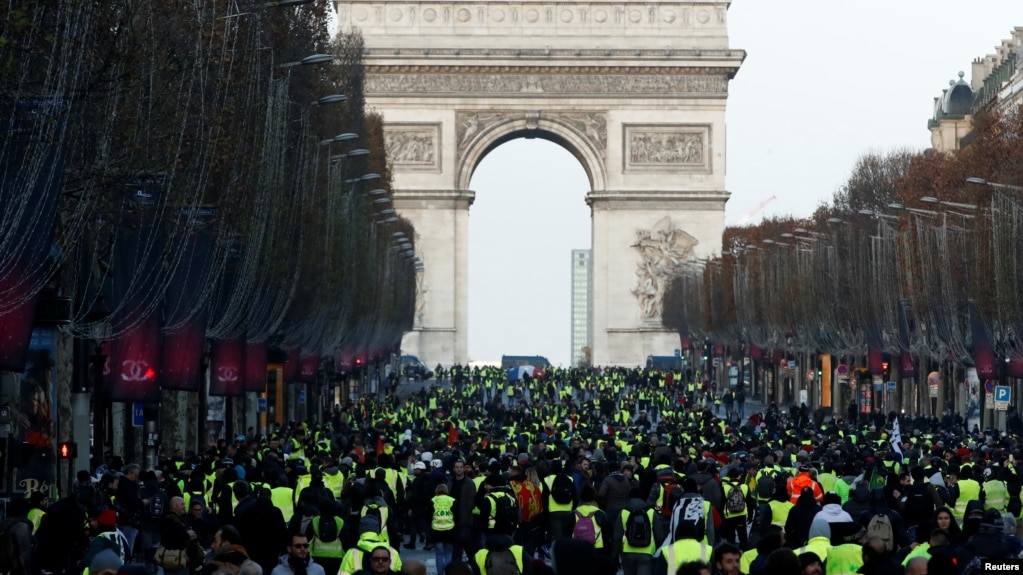 Laurent said about 31,000 people were protesting nationwide, about the same number during last weekend’s protests.

Bracing for a fourth week of violent protests, France closed the Eiffel Tower and other tourist landmarks and mobilized tens of thousands of security forces.

Many shops in Paris were boarded up before Saturday’s planned protests to avoid being smashed or looted, and police cordoned off many of the city’s broad boulevards.

More than 89,000 police are being deployed nationwide, an increase from 65,000 last weekend, when protests over rising taxes turned into a riot that left more than 130 people injured.

Police deployed armored vehicles in central Paris and removed any materials from the streets that could be used as weapons or projectiles during the demonstrations, including street furniture at outdoor cafes.

President Emmanuel Macron made an unannounced visit Friday night to a group of anti-riot security officers outside Paris to thank them for their work.

The protests erupted in November over the fuel tax increase, which was part of Macron’s plan to combat global warming.

U.S. President Donald Trump tweeted Saturday that the Paris Agreement, a global effort to reduce global warming beginning in 2020, “isn’t working out so well for Paris” and that “People do not want to pay large sums of money … in order to protect the environment.”

The Paris Agreement isn’t working out so well for Paris. Protests and riots all over France. People do not want to pay large sums of money, much to third world countries (that are questionably run), in order to maybe protect the environment. Chanting “We Want Trump!” Love France.

Since the unrest began in November, four people have been killed in protest-related accidents.

While Macron has since abandoned the fuel tax hike, protesters have made new demands to address other economic issues hurting workers, retirees and students.

Government officials are concerned a repeat of last week’s violence would weaken the economy and raise doubts about the government’s survival.

Officials are also concerned about far-right, anarchist and anti-capitalist groups like Black Bloc that have mimicked the “yellow vest” movement.

The “yellow vest” movement was named after the safety jackets French motorists are required to keep in their vehicles, which the protesters wear at demonstrations.

The weeks of protests have exposed intense resentment among non-city residents who feel that Macron, a former investment banker, is out of touch with struggling middle-class and blue-collar workers.

BRUSSELS (AP) — Belgian police fired tear gas and water cannons at yellow-vested protesters calling for the resignation of Prime Minister Charles Michel after they tried to breach a riot barricade, as the movement that started in France made its mark Saturday in Belgium and the Netherlands.

Protesters in Brussels threw paving stones, road signs, fireworks, flares and other objects at police blocking their entry to an area where Michel’s offices, other government buildings and the parliament are located.

Brussels police spokeswoman Ilse Van de Keere said that around 400 protesters were gathered in the area.

About 100 were detained, many for carrying dangerous objects like fireworks or clothing that could be used as protection in clashes with police.

The reasons for the protests are not entirely clear. Neither Belgium nor the Netherlands has proposed a hike in fuel tax — the catalyst for the massive and destructive demonstrations in France in recent weeks.

Instead, protesters appeared to hail at least in part from a populist movement that is angry at government policy in general and what it sees as the widening gulf between mainstream politicians and the voters who put them in power. Some in Belgium appeared intent only on confronting police.

Earlier in Brussels, police used pepper spray and scuffled with a small group of protesters who tried to break through a barricade blocking access to the European Parliament and the European Union’s other main institutions.

The rallies, which started at different locations around the city and converged on the European quarter, disrupted road and rail traffic on one of the busiest Christmas shopping days of the year.

Dozens of people were searched as they arrived, and police warned people to stay away from the area.

In the Dutch city of Rotterdam, a few hundred protesters in the high-visibility vests that have become a symbol of the movement walked peacefully across the downtown Erasmus Bridge singing a song about the Netherlands and handing flowers to passers-by.

Sisters Beb and Ieneke Lambermont, aged 76 and 67 respectively, were among them.

“Our children are hard-working people but they have to pay taxes everywhere. You can’t get housing anymore. It is not going well in Dutch society,” Ieneke said. “The social welfare net we grew up with is gone,” she said.

“The government is not there for the people. It is there to protect its own interests,” she said.

About 100 protesters gathered in a peaceful demonstration outside the Dutch parliament in The Hague. At least two protesters were detained by police in central Amsterdam.

Jan Dijkgraaf, the editor of a Dutch “resistance newspaper” had called for peaceful protests in Amsterdam and Rotterdam.

Dijkgraaf said people are yearning for a past, more socially equitable, era of Dutch history, describing it as “a feeling of unity, but also looking after asylum-seekers well, taking good care of one another.”

Other protesters appear more extreme — at a small and non-violent rally last week in The Hague one protester waved a historic Dutch flag that has become an emblem for the far right — and Dijkgraaf said some demonstrators are unhappy at his moderate plans.

But he said violence like that seen last week in France and to a lesser extent Belgium does not work in the Netherlands.

“The Netherlands is not like France — you light 100 cars on fire and you get what you want,” he said in a phone interview this week. “If you torch 100 cars here you are never allowed to demonstrate again and nothing more happens.”