The latest UN State of the Climate report spells it out clearly. The last four years have been the hottest on record and the Earth is on track to keep warming. All the available evidence points toward an unstable future characterized by more extreme weather events as well as increased desertification of dry regions and exacerbated rainfall in wet regions.

Our health, food security, infrastructure, and economic productivity will all be impacted, and numerous plant and animal species will likely go extinct.

So, what can we do? One idea that has been kicked around for decades, yet has never gotten off the ground, is called solar geoengineering. Elegant in its simplicity, the idea is to cool Earth by introducing a plume of sunlight-reflecting small molecules into the upper atmosphere.

We know from observing the temporary climate cooling that follows volcanic eruptions – which launch large quantities of sulfur dioxide into the stratosphere – that the concept is sound, but solar geoengineering has not been attempted yet because of all of the things that could go wrong. For example, what if the molecules further degrade the ozone layer? What if the sunlight shielding is too extreme in one area?

The brainchild of atmospheric chemists James Anderson and Frank Keutsch and experimental physicist David Keith, SCoPEx will take the form of a propelled balloon carrying a particle dispenser and a suite of chemical, temperature, and light sensors. According to a report in Nature, the initial tests will involve two steerable balloons each spraying about 100 grams (3.5 ounces) of calcium carbonate into the air 20 kilometers (12 miles) above the American Southwest. Once the calcium carbonate is deployed, the balloon will fly into the heart of the plume so that the sensors can monitor how the molecules, which do not occur naturally in the atmosphere, behave in this environment.

If all goes to plan, the experiment could proceed in the first half of 2019. In the meantime, the trio’s teams are working to coordinate the final stages of development of the various instruments and balloons, most of which are being made by specialist manufacturers.

By their calculations, a moderately sized fleet of balloons dispensing 0.5-micrometer calcium carbonate crystals could improve the climate of regions around the world.

“Despite all of the concerns, we can’t find any areas that would be definitely worse off,” Keith told Nature. “If solar geoengineering is as good as what is shown in these models, it would be crazy not to take it seriously.”

That being said, the group understand the gravity of trying to launch a project that could impact the entire planet. To move forward as responsibly as possible, the scientists are assembling an independent advisory committee who will review the plans before SCoPEx launches.

“Getting it done right is far more important than getting it done quickly,” Peter Frumhoff, chief climate scientist at the Union of Concerned Scientists and member of the advisory committee selection panel, told Nature.

Chemtrails are geo-engineered aerosols that are loaded with toxic chemicals, including but not limited to: barium, strontium 90, aluminum, cadmium, zinc, viruses and “chaff.” Chaff looks like snow but it’s actually Mylar fibers (like in fiberglass) coated with aluminum, desiccated blood cells, plastic, and paper. Polymer chemist Dr. R. Michael Castle has studied atmospheric polymers for years, and he has identified microscopic polymers comprised of genetically-engineered fungal forms mutated with viruses, which are now part of the air we breathe.

Chemtrails have nothing to do with the jet engine combustion process. They are often laid in a grid-like pattern by multiple planes (even drones) where they disperse slowly taking on the appearance of odd, at first narrow, but widening, smoky clouds until merging together to form, if sufficiently numerous, an aerosol bank that obscures the blue sky and gives the appearance of a dirty white overcast.

Unlike normal contrails which quickly dissipate, chemtrails (“fake clouds” as my children call them) sometimes take hours to dissipate and eventually fan out to a “spider web” type of milky haze that covers the entire sky. As these are formed from minute reflective metallic particulates they eventually reach the earth.

Still having doubts? Please download this PDF file called HR 2977 “The Space & Preservation Act of 2001.” In this document the United States Government openly admits the existence of chemtrails.

Still not enough proof?  What if I told you that there are patents for these very such things? The image below is a 1975 U.S. Patent issued to Donald K. Werle, Romas Kasparas, Sidney Katz, assigned through the U.S. Navy, that describes a dispersion method for a “powder contrail.” 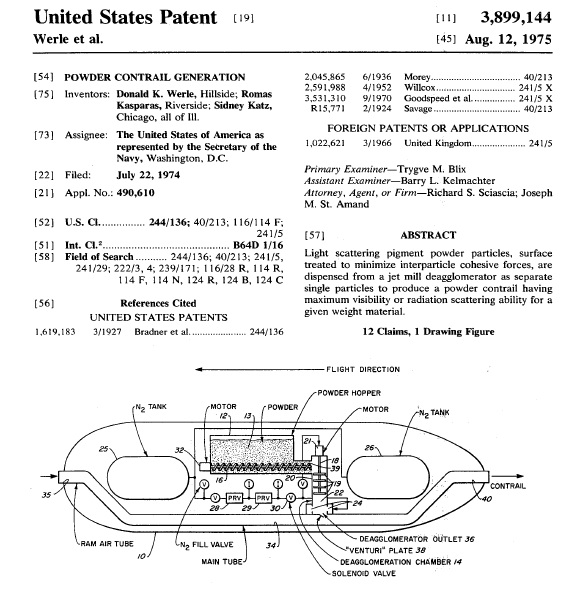 Here are just a few more patents relating to chemtrails and geoengineering:

How Do Chemtrails Impact Our Food and Water?

Secretly filling the sky, without our knowledge or consent mind you, with billions of megatons of aluminum, strontium 90, barium and “chaff” to reflect the suns dangerous rays back into space is epic and brilliantly maneuvered on the unsuspecting public by dubbing them as “persistent contrails.”

However, what goes up, must come down and we’re being bombarded daily with a chemical and radioactive fallout surpassed only by Agent Orange, the defoliating chemicals developed by Monsanto to wipe out the jungles during the Vietnam War.

Since aluminum has an affinity for water, all life forms attract these oxides. This causes contamination of even organic fruits, vegetables, and livestock if they’re exposed to the open air, because plants readily absorb aluminum salts from the soil into their vascular systems. Everything absorbs aluminum salts and it’s in the air.

Processed foods are filled with aluminum salts and aluminum sulfate is added to water to make it clear. Apparently we are in the “Aluminum Age” and it’s everywhere, but so unhealthy according to Dr. Christopher Exley, Professor of Bioinorganic Chemistry at Keele University in the UK.

Chemtrails Are Polluting Our Environment

The reality is, this “toxic cloud shield” created by aerosolizing the atmosphere, diminishes rainfall, traps the heat, and increases humidity.

This leads to a plague of pests, mildews, molds, fungi, diseases, and ultimately the shredding of our precious ozone layer that protects us from dangerous UV rays, according to Dane Wigington, a solar expert.

In California’s Mount Shasta region, Francis Mangel, a USDA Wildlife Biologist and water specialist has reported elevated levels of aluminum, barium, and strontium in the mountain’s snow, polluting drinking water, rivers and soil in the area. In 2008, samples around California’s Lake Shasta and the Pit River Arm tributary were tested in a State Certified Lab following weeks of fly-overs and chemtrails. The results of the water samples showed 4,610 parts per million of aluminum. This is  4,610 times the maximum contaminant level!

With aluminum toxicity levels off the charts, chemtrails are putting our life systems at risk of irreparable damage. 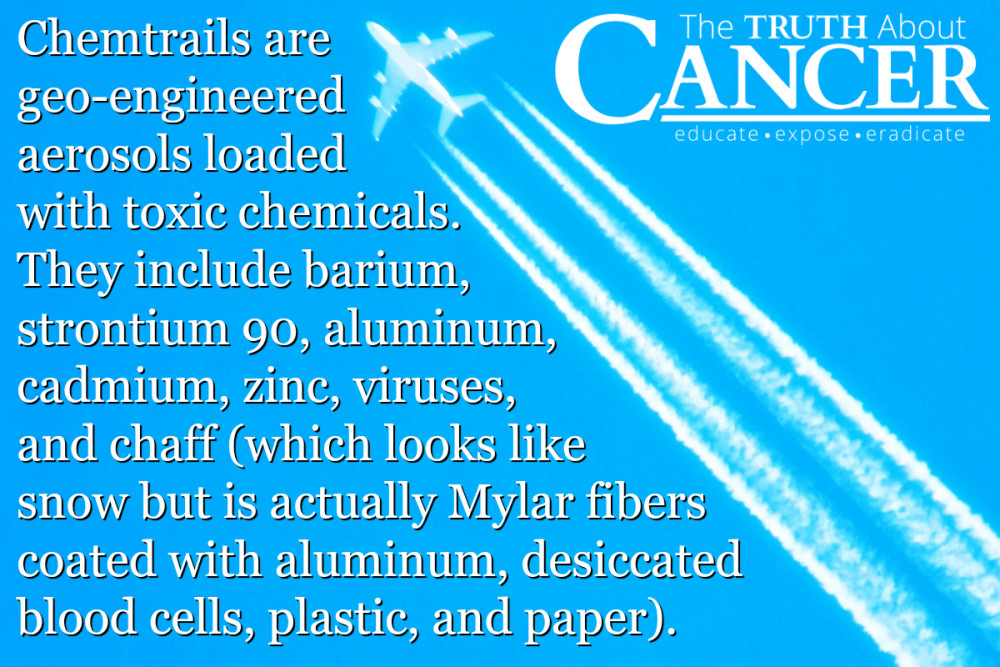 How Are These Visible ChemTrails in the Sky Linked to Cancer?

As mentioned earlier, aluminum laden “chaff” falling from the sky enters the lungs causing upper respiratory diseases, lung cancer, breast cancer, and is the gateway to vulnerable areas of the body including arterial walls, where it accumulates like a plaque.

In addition, aluminum toxicity generates a number of neurological disorders and brain cancer, while radium and zinc cadmium sulfide synergistically cause bone cancer.  A concerning new study published in the Journal of Inorganic Biochemistry demonstrates that exposure to aluminum can increase migratory and invasive properties of human breast cancer cells, while a 2012 article in the Journal of Applied Toxicology shows that aluminium promotes growth in human mammary epithelial cells. And “aluminum production” has been classified as carcinogenic to humans by the International Agency for Research on Cancer (IARC).

Chemtrails are largely responsible for the explosion in such debilitating illnesses such as Dementia and Alzheimer’s.

A full 18% of the Earth’s sunlight is not being blocked from reaching the planet. Now, as I have recently covered, the globalists have a new plan, it is called the “Dimming the sun”, though the dispersion of chemical particles in the Stratosphere, in which the globalists admit that Chemtrails are real and the strategy is designed to block sunlight from reaching the earth and will limit crop yield. This, too, will lead to mass starvation events.

This fraud against humanity is discussed in detail here.

The concept is discussed in detail in the following: