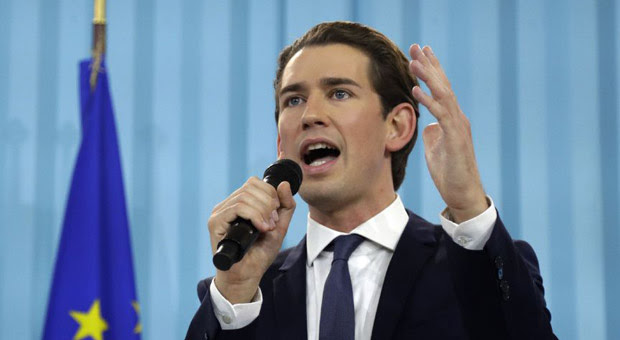 on 30th December 2018 @ 8.00pm © press Sebastian Kurz vows that those who preach ‘radical’ or ‘political Islam’ will be expelled from Austria

Austrian Chancellor Sebastian Kurz, the world’s youngest leader, has ordered the closing of seven mosques and has begun deporting “radical” imams back to their homelands due to violations of a recent law in Austria that bans “political Islam”.

“Parallel societies, politicized Islam or radical tendencies have no place in our country,” Mr. Kurz said at a press conference announcing the measures in Vienna, while railing against the disastrous results of multiculturalism in Western Europe.

Chancellor Kurz believes Muslims must be loyal to Austria and willing to integrate into society if they are to stay in the country.

If they form a “parallel society” and start preaching “political Islam“, identity politics and divisiveness, they will be expelled.

The law aims to prevent any conflict between “thinking of oneself as a pious Muslim and proud Austrian citizen at the same time,” by regulating operations of the Islamic community.

Two imams have already received deportation orders, and another 60 are under investigation and could face expulsion along with their entire family, Herbert Kickl, the Austrian interior minister, said.

A number of mosques were shut down over suspicions of links to Islamic extremism after images emerged of children as young as four being forced to wear Turkish army uniforms and salute the Turkish flag inside the mosque in Vienna’s Favoriten district.

31-year-old Sebastian Kurz, who claimed victory in Austria’s general election last year while vowing to destroy the New World Order, is making good on his promise to ignore the European Union’s globalist directives regarding Muslim immigration.

Ultimately, Kurz plans to reclaim Austrian sovereignty by leading the nation out of the European Union.

The UN official called the coalition a “dangerous development in the political life of Europe,” and said he was particularly concerned with the new hardline migrant policies endorsed by Chancellor Sebastian Kurz.

Predictably, Kurz’ popular nationalist and anti-globalist policies are proving deeply worrying to the United Nations, which is currently pushing for open borders around the globe.

“We have to be very careful about whether there is an imitation effect for other politicians in Europe,” Al Hussein said.

Hussein also warned, “the extreme right should think very carefully about where it leads its countries and the continent in general.”

The Socialist faction in the European Parliament has also come out against the new coalition saying they would not rule out similar sanctions against Austria that were threatened in 2000 when the FPÖ last formed part of a coalition government.