Another Day, Another Stupid Statement

U.S. Rep.-elect Alexandria Ocasio-Cortez, D-N.Y. wished her Twitter followers a Merry Christmas Tuesday by referring to the newborn Jesus as a “refugee.”

“Joy to the World!” Ocasio-Cortez wrote. “Merry Christmas everyone – here’s to a holiday filled with happiness, family, and love for all people. (Including refugee babies in mangers + their parents.)”

Joy to the World!

Merry Christmas everyone – here’s to a holiday filled with happiness, family, and love for all people.

(Including refugee babies in mangers + their parents.)

To the child that inhabits Ocasio-Cortez’s body, please allow me to remind you of the history you should have learned in college. There was no border wall between between Egypt and Israel because the Roman Empire ruled over the entire region! Get a clue, Democrat!

Last month, Ocasio Cortez, once again showing off her superior intellect, went on to compare members of a Central American migrant caravan approaching the U.S. border to Jewish families fleeing the Nazis victims of genocide in Rwanda and refugees from Syria’s ongoing civil war. What? What planet am I on?

Senator Lindsey Graham responded that Ocasio Cortez would be well advised to visit the Holocaust museum so she could clearly see that the caravans on the border have nothing in common with formerly persecuted Jews of the Nazi period of history. Does anyone else wonder if even George Soros is questioning his support for this unbelievably ignorant person. The term, “Dumber than a box of rocks” comes to mind.

Even Nancy Pelosi Has Found Jesus

I actually saw a video tape of the following and I have to say that when Nancy Pelosi was invoking the story of King Solomon she sounded like someone who was trying to learn a second language.

“I told (Trump) about Solomon, King Solomon, when he was to become King of the Jews he prayed to God and said, ‘How can I ever follow King David, King David, King of the Jews? I need you to give me great understanding and wisdom, Lord,’ and after he prayed and prayed and prayed, a guy came to him and said, ‘Solomon, because you did not ask for longevity, great wealth or vengeance against your enemy, I will give you more wisdom than anyone has ever had — the wisdom of Solomon.’”

This isn’t the first time Pelosi said that she’s prayed for Trump. After his election in 2016, Pelosi said she prays for his success and she said again last year that she prays for the president and his family.

Please, Nancy Pelosi, don’t ever pray for me, I would like to be a little more certain of the outcome.

The false teachings in Word of Faith and Health & Wealth cults are nothing more than tools used by wolves to manipulate their followers into giving their loyalty and their finances to their dangerous movements.

Once again Brian Houston gives allegiance to money and wealth under the guise of faith in Jesus, 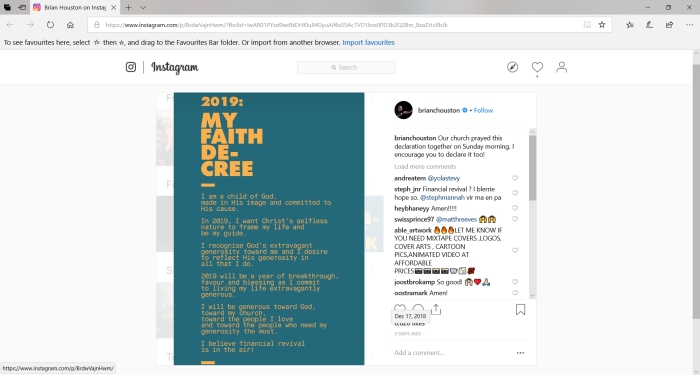 Soon after Brian Houston states the above on Instagram:

“Our church prayed this declaration together on Sunday morning. I encourage you to declare it too!”

This is a classic example of Brian Houston manipulating his followers in order to ‘milk’ them of their finances. He offers just enough Christian language in the decree to make it sound ‘selfless’. However, if we simply reverse the pledge, Houston is capitalising on people’s inate sinful nature and offering them a ‘salvation by works’ gospel (which in reality is no gospel at all).

“I believe financial revival is in the air.“

That’s the ‘carrot’ everyone is trying gain – money. That’s the motive as to why they are giving. But why are they believing the false biblical notion that ‘financial revival is in the air?

So if you declare this decree Brian Houston has made up and ‘be generous’, you will receive ‘financial revival’ for 2019. In other words, give money to Hillsong and God will unlock ‘financial revival’ in your life. Note that after God, generosity towards the ‘church’ has priority over family and those who need it most.

“2019 will be a year of breakthrough, favour and blessing as I commit to living my life extravagantly generous.“

By reversing the pledge – we can see now it has nothing to do with God’s favour. If it is up to the person’s ‘giving to get’ God’s prosperous favour – then it’s not favour. The Hillsong followers are motivated by greed to living as ‘extravagantly generous‘. We have to ask the question – with Hillsong followers’ expectations raised to such a level, what is the impact on their ‘faith’ when they don’t experience breakthrough?

“I recognise God’s extravagant generosity toward me and I desire to reflect his generosity in all that I do.”

The above statement is the dangerous narrative of Health and Wealth cults. This narrative often based on John 3:16, suggesting that if God gave his Son for us, how much more should we financially give to a ‘god of wealth’. Flourishing in the theology of Hillsong is the belief that Jesus Christ was rich (materially) but died poor so we can be rich (materially).

The truth is that what Christians bring to others as disciples of Christ and His finished work of redemption, are eternal riches – we offer them the free gift of salvation through Jesus Christ, the same way Peter offered the lame man salvation when Peter had no silver and gold to give him (Acts 3).

Given that Christians have the nature of Christ through the indwelling power of the Holy Spirit, this is an interesting statement. Brian Houston and Hillsong (as is often the case in these cults), are literally confessing they are outside of the Christian faith by not acknowledging they have saving faith through the Holy Spirit. It is the inner working of the Holy Spirit that motivates the believer to love and live sacrificially.

If they’re decreeing this for 2019, what have they been missing out on this entire time? Then again, because they believe in the false Health & Wealth and Word of Faith gospels, is it any surprise they lack any Christian understanding of the true gospel, the true Holy Spirit and the true Jesus of Christianity?

“I am a child of God, made in his image and committed to his cause.”

Working from the bottom up, this is why Word of Faith doctrine is so dangerous. If Hillsong have no concept of the gospel, Jesus Christ, the Holy Spirit and a biblical understanding of grace, how can they know they are a child of God? According to them – you just confess it. Speak it as though it is true. That’s called ‘delusion’. If they don’t know what Christianity is and they’re claiming to be God’s children, then in reality Brian Houston’s appeal to their greed is ‘searing their consciences’. As they pledge their allegiance to Hillsong and its false doctrine, who will show them what biblical Christianity actually teaches on these important matters?

Brian Houston would rather his followers line his pockets as they march off to hell, wrongly ‘confessing’ they are God’s children. This is wicked – if Hillsong were truly followers of Christ and His Word, they would simply read out a section of scripture or a creed. But they don’t – they create their own ‘creed’, speak it and believe it, and this is why Hillsong is so dangerous. They not only financially ruin you at the expense of their leadership, they send you to hell while encouraging you to declare you’re ‘a son of God’, all without knowing the basics tenets of biblical Christianity.

I believe financial revival is in the air.

2019 will be a year of breakthrough, favour and blessing as I commit to living my life extravagantly generous.

I recognise God’s extravagant generosity toward me and I desire to reflect his generosity in all that I do.

In 2019, I want Christ’s selfless nature to frame my life and be my guide.

I am a child of God, made in his image and committed to his cause.

Can’t you see the dollars just falling from the sky?

Ozzy Osbourne has just announced the next set of dates for his “No More Tours 2” run. Beginning this spring, Ozzy will travel throughout North America with support from Megadeth.

This may be the final time Ozzy makes his way around North America on this trek, and he’s doing it with one of the best backing bands in his solo career.

Add thrash legends Megadeth to the mix and you’ve got a gig that can’t be missed.

“There’s nothing in the world — sex, drugs, anything — that comes anywhere close to the way you feel when you’re doing the best show,” Ozzy says. “If it’s a nightclub, or the Forum, or Ozzfest, I’m going out with the expectation of giving them my heart and soul.” 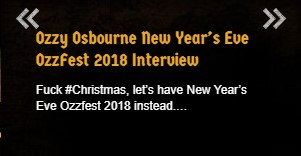 Surprise! Ozzy Osbourne, AKA the Prince of Darkness, is actually a Christian, or in the least deeply connection to the religion.

Despite references to Satanism and biting the head off of a bird, Ozzy found himself a member of the Church of England in 1992, saying that he prayed before every performnace. He hasn’t spoken publicly about his faith since, but it has continued to be a subtle part of who he is.

Ozzy’s marriage to wife Sharon Osbourne has certainly gone the distance, and his once wild, drug fueled lifestyle has tempered into a sober one. Ozzy was seen wearing crosses many times on his successful reality show, even taking time to kiss the cross every now and then.

But does this make him a Christian? This man is a false convert.

The string of shows begins May 29 in Atlanta and runs for two months until finishing up July 29 in Los Angeles. Tickets go on sale Friday, Nov. 9 at 10AM local time via Live Nation.