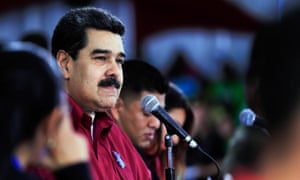 The alleged attack was cause for speculation, but U.S. National Security Adviser John Bolton has denied any American involvement.

“I can say, unequivocally, there is no U.S. government involvement in this at all,” Bolton told Fox News anchor Chris Wallace in an interview on Fox News Sunday. Bolton added that he spoke with the U.S. government’s head diplomatic official in Caracas on Sunday morning who confirmed that Americans in Venezuela are also safe.

The Venezuelan president was speaking in Caracas at an 81st anniversary event to commemorate the national guard when armed drones flew toward the assembly, CNN reported. Maduro, who was not hurt in the apparent attack, said later in a televised statement, “To all of our friends in the world, I am fine, I am alive.”

An investigation into the incident is underway. Tarek William Saab, Venezuela’s attorney general told CNN that he assigned three prosecutors to investigate the drone attack. Maduro said in his televised address that some people were already in custody and facing charges, but he also blamed Venezuelans living in the U.S. for allegedly collaborating with those responsible.

“The preliminary investigation indicates that many of those responsible for the attack, the financiers and planners, live in the United States in the state of Florida,” Maduro said. “I hope the Trump administration is willing to fight terrorist groups that commit attacks in peaceful countries in our continent, in this case Venezuela.”

Is a US-backed ‘military option’ to oust Maduro gaining favour?

When Donald Trump first floated the idea of a “military option” in Venezuelalast year, he was widely rebuffed by regional leaders and policy experts.

Even the US president’s closest aides were reportedly stunned by the suggestion of an invasion – which for many in Latin America evoked bitter memories of previous US forays in the region.

Direct US intervention remains a fringe idea, but a small section of the Venezuelan opposition appears to be receptive to the possibility of a military coup to remove the country’s increasingly authoritarian president Nicolás Maduro. 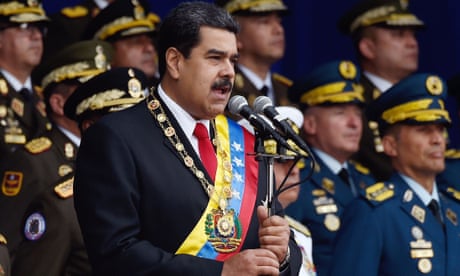 And while most prominent opposition politicians have avoided explicit calls for a coup, some now appear to believe that Maduro will not be removed at the ballot box.

When the country’s legislature flipped to the opposition in 2016, the president sidelined it and installed a parallel assembly stacked with loyalists. He won re-election in May this year, in a vote described as a sham by rivals and observers.

“There’s no democratic way out of this crisis,” said Julio Borges, an opposition politician now living in Colombia. “The army have a new enemy and it is Nicolás Maduro – they know he is taking the country down the worst path.”

The country may have the world’s largest oil reserves, but it is slowly collapsing. Inflation has rendered Venezuela’s currency worthless, while shortages in basic goods are commonplace. Crime rates are soaring and justice is seldom served. About 2.3 million Venezuelans have simply fled the country.

The situation is desperate, but the New York Times report has prompted fresh concern that hardliners in Washington and Caracas are looking to engineer an intervention.

“In a climate in which we are already seeing more warlike rhetoric gain ground in Washington, I’m starting to get worried that we really might be heading towards US intervention in some form,” said Geoff Ramsey, a Venezuela expert at the Washington Office on Latin America (Wola), a thinktank.

“The story is sure to be used as fodder for the Venezuela hawks in Washington, who are claiming that previous coup attempts failed because the White House didn’t provide needed aid,” he said.

The Florida senator Marco Rubio – who has reportedly helped frame much of Trump’s Latin America policy – wrote an op-ed in the Miami Herald in February calling for an uprising in Venezuela.

“History reminds us that despots rarely give up dictatorial power voluntarily,” Rubio wrote. “The most stable and peaceful path forward for Venezuela is for a united front of disaffected government insiders and military personnel, with popular support from the Venezuelan people, to remove Maduro and his inner circle from power.”

Maduro and his government have already been targeted for violence: last month he survived an assassination attempt that used drones armed with explosives.

A small, mysterious group called Soldiers in T-Shirts appeared to claim responsibility for the attack, though the president blamed the Colombian government and Venezuelan opposition members, including Borges, and launched a crackdown on dissenters.

Last year, a rogue police officer, Óscar Pérez, hijacked a helicopter and fired at government buildings in what he said was an action against a dictator. Pérez was hunted down and killed by Venezuelan forces.

Maduro’s predecessor, Hugo Chávez, was himself almost toppled in a short-lived military coup attempt in April 2002. But the plotters were unable to shore up popular support, and Chávez was back in power three days later, more bellicose than before.

It later emerged that the administration of George W Bush had known about the coup plot, although distanced itself publicly from involvement. That did not stop Chávez from describing the episode as yet another example of US imperialistic intervention.

It is a script that is now being followed by Maduro, who has long accused the US of meddling.

Saturday’s revelations about a new plot are red meat for the embattled president, said Omar Lares, a former opposition mayor who fled to Colombia a year ago.

“The way I see it was that these reports [about a US conspiracy] are a huge, stupid favour to Maduro,” he said.

• This article was amended on 14 September 2018 to more accurately summarise descriptions of the 2002 coup against Hugo Chávez.