One of the walls inside Mary’s — ‘Satan rules you suck”

A hipster burger joint that joked about Jesus getting ‘hammered’ over Easter has been flooded with negative reviews.

Mary’s, a popular burger bar in Newtown, has received hundreds of negative reviews after sharing an image of Jesus holding a cigarette and can of beer to Facebook on Wednesday.

The restaurant’s original 4.5 star rating has dropped to 3.6 as users have criticised the business for the disrespectful post which made light of Christ’s death. 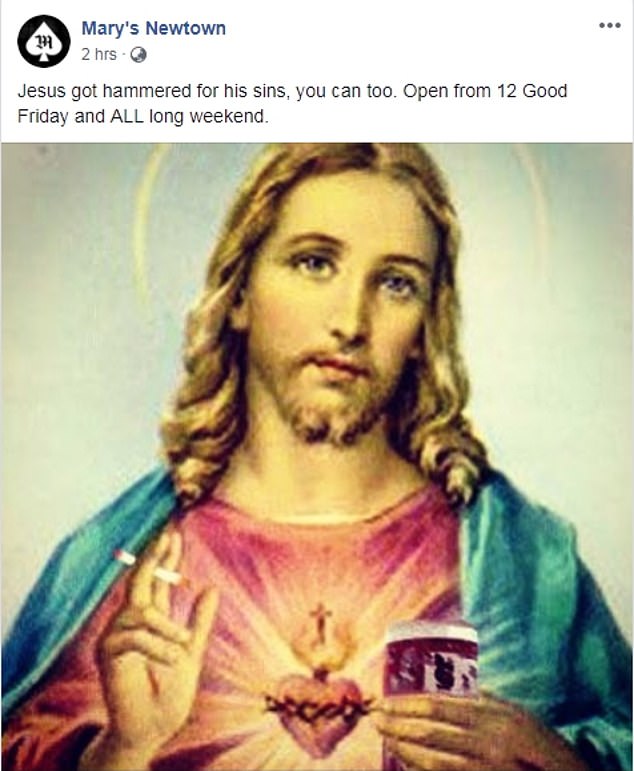 Mary’s in Newtown, has received hundreds of negative reviews after sharing a ‘disrespectful’ image of Jesus on Facebook

The restaurant’s original 4.5 star rating has dropped to 3.6 as users have criticised the business

‘Jesus got hammered for his sins, you can too. Open from 12 Good Friday and ALL long weekend,’ the caption said.

‘Absolute filth. Rats and other rodents clearly visible in the kitchen area. Staff ignoring waiting patrons and management drinking alcohol on shift. What looks like a cool funky place the reality is pure filth by its establishment and employees,’ one review said.

‘They make a mockery of Jesus, our Christian faith and want a five star rating??? Have respect for others!!!,’ another person said.

One person posted: ‘Disrespectful!!! Disrespecting a religion is a very bad way of marketing your business! Shame on you!’

‘Disgusting content, making a mockery out of religion to promote our business. Stingy burgers and really poor customer service. Congratulations on destroying your business,’ a reviewer commented.

Another said: ‘Staff are disrespectful, rude and insight hatred. They should focus on the menu to attract attention not rude posts to grab attention. I definitely recommend walking straight passed the door.’

One group claimed they were organising a rosary prayer session to be held at the restaurant on Good Friday if the post wasn’t removed.

Mary’s has since taken down the post and Daily Mail Australia have contacted the restaurant for comment.

A Sydney pub burger joint has been branded “disgusting” and “disrespectful” after posting a controversial joke about Jesus on their Facebook page.

Mary’s Newtown shared a picture of Jesus holding a cigarette and a beer yesterday, along with the caption: “Jesus got hammered for his sins, you can too.”

The post was flooded with thousands of angry comments, and the pub later deleted the picture from their page.

The post didn’t sit well with a lot of people. Picture: Mary’s NewtownSource:Facebook

“Brothers and sisters, PLEASE give this place a bad rating, they are Mocking our Lord Jesus Christ,” the group posted.

Since then the pub has been inundated with negative reviews — the majority posted within a few hours of each other.

The page has been flooded with one-star reviews. Picture: Mary’s NewtownSource:Facebook

Only a few reviews cited the post about Jesus as the reason for the bad rating.

“Mary’s Newtown was my local burger joint (being that it’s only up the road from my place) until today. I am extremely disgusted and appalled by the distasteful and disrespectful advertising for the Easter period. You’ve lost a customer (and probably a lot more) by that ignorant stunt,” one read.

Many vowed to boycott the restaurant. Picture: Mary’s NewtownSource:Facebook

“For you to post something disrespectful about Jesus when the majority of your clients are believers. It’s a kick in the guts. You lost me as a client,” another said.

One person wrote: “ They should focus on the menu to attract attention not rude posts to grab attention.”

“We took it down because people started to make threats of rape and murder,” he said.

They didn’t meant to offend? — What?

The burger joint has clearly no idea the significance of anything sacred or decent. They have no scruples.

Jesus was whipped, beaten, and nailed to the cross for OUR sins.

They know nothing of Jesus Christ, but some guy, a mere religious figure who just happens to pops up in our calendar around twice a year and can help market their business — Deplorable!!

But perhaps they are to be most pitied, due to such appallingly ignorant thinking?