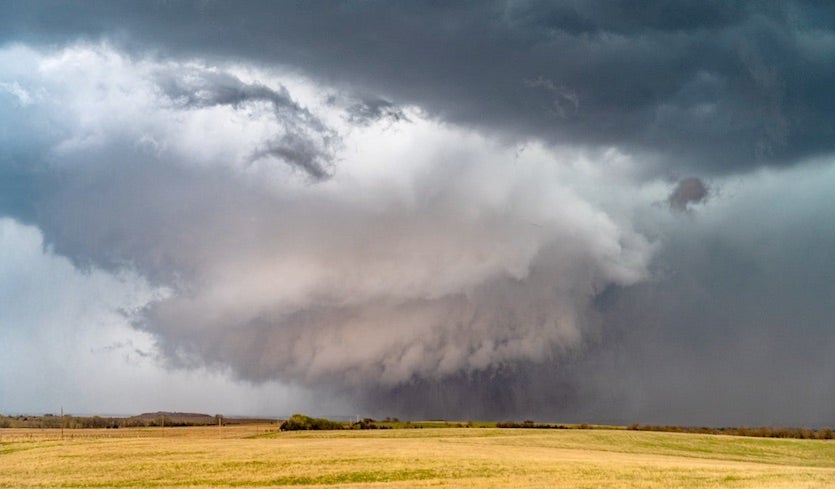 Above: A group from Puget Sound, Washington, caught this dramatic photo of a large wall cloud in central Kansas on Tuesday, May 1, 2018. Image credit:  Courtesy Michael Snyder, @guyinjeep16.

Over 30 tornadoes were reported on May 1, 2019, after a severe weather system crashed through Texas, Oklahoma, Kansas and Missouri, killing at least 4 in Oklahoma and Missouri. Nearly three dozen tornadoes were reported in those 5 states. At least three people were killed in Oklahoma and one died in Missouri. Buildings were damaged and trees were downed from the suspected tornadoes. At least five injuries have been reported.

Numerous hail reports were recorded as well, including in Ozona, Texas, where hailstones larger than baseball size (2.75 inches) were reported.

Here’s a rundown of the impacts in each state.

Flooding from the storms forced the closure of nearly 280 Missouri roads and prompted officials to evacuate some campgrounds, the AP reports.

The Newton County, Missouri, emergency management office confirmed that they had received reports of damage from a tornado in Wheaton, Missouri, about 67 miles southwest of Springfield.

Photos on social media appear to confirm those reports, with severe damage seen in at least one structure in Wheaton.

Brandon VanDalsem, who took the photos, said in the post that “no one was home,” but that report has not been independently confirmed.

In western Missouri, a possible tornado damaged at least a dozen homes in Ozark, about 20 miles south of Springfield.

Other suspected tornadoes were reported in the towns of Rocky Comfort, Miller and Stella in southern Missouri.

Barbara Hagar, a spokeswoman for the Arkansas’ emergency management agency, told the Associated Press a likely tornado near the northern Arkansas town of Bergman downed trees and power lines and tore the roof off one home and damaged several others. 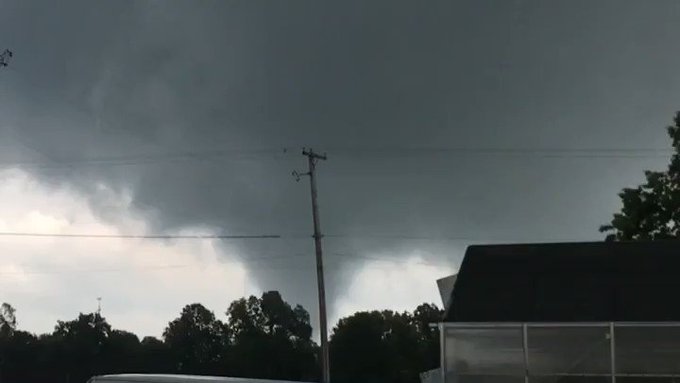 Several buildings were damaged by a reported tornado in Rogers County, Oklahoma, north of Tulsa. Emergency Management Director Scotty Stokes told weather.com that at least four buildings and several barns and outbuildings had been damaged.

Kiamichi Electric said a possible tornado knocked out power to thousands near Tulsa.

In Texas, a reported tornado caused tree and roof damage in the Red River community of Charlie, home to 70 residents and located about 17 miles northeast of Wichita Falls, the AP reported. 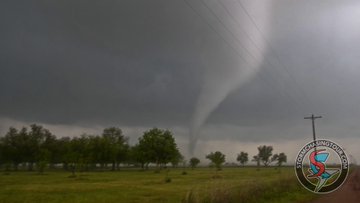 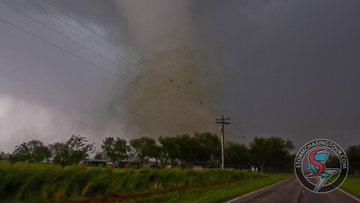 Images of the tornado that occurred northeast of Wichita Falls, Texas on 4/30/19. #txwx

One farmer reportedly lost some 300 peach trees to the storm.

A suspected tornado damaged a church in the town of Paola, about 40 miles southwest of Kansas City, the Kansas City Star reported.

Trinity Lutheran Church sustained damage to its roof, a flagpole and headstones in the church’s cemetery, which were toppled by the storm.

T​he severe weather continues Thursday. Scattered strong to severe storms are possible from parts of Texas into the Ohio Valley, with large hail and damaging winds being the primary threats. An isolated tornado is also possible. This is the second impressive tornado outbreak within a weeks.