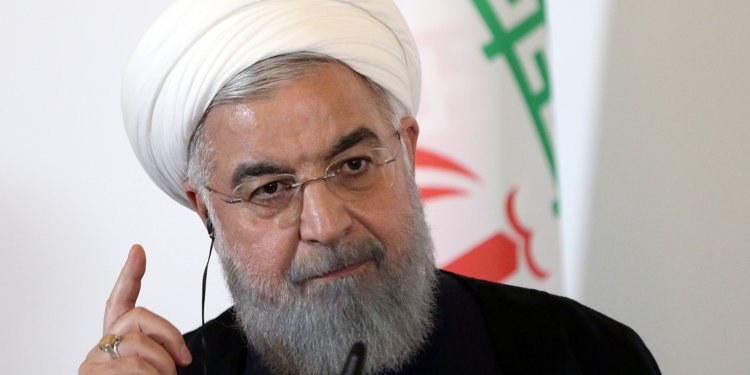 Intelligence sources confirm this morning that Iranian President Rouhani has been sidelined by the Iran Revolutionary Guard Corps (IRGC)  after the nuclear deal became viewed as a complete failure.  While Rouhani keeps his title, he is now merely an Observer; with IRGC calling all the shots.

Among their first acts: Informing Iran Proxies they are now free to attack adversaries.

This morning on the east coast of the USA, word arrived that Iran regime has told some of its proxy forces and surrogates that they can now go after military personnel and assets in the region, according to three U.S. officials familiar with the intelligence reports.

The United States has repeatedly made clear to Iran and to the public that any attack by Iranian proxies against US forces, US Bases or those of our allies, will be viewed by the US as an attack by Iran itself.

Despite this, Iran has continued to ship medium range ballistic missile via boats, to put those missiles into positions to attack US forces and those of our allies.  Every effort to get Iran to stand-down has failed.

Washington and London are now officially in “crisis management mode” with military and political leaders on both sides of the Atlantic convinced Iran is about to undertake a serious series of actions. Everyone is prepping for a response to Iran, should Iran do something foolish. The Iranians at this time have NOT stood down their assets and still are in threatening posture.

Pre-emption is a possibility I am told, but as of now there is incredible nervousness in Washington and London with everyone on a hair trigger to hit Iran hard should they carry out acts against allies or allied assets.

Today, all eyes are on a small island near the Strait of Hormuz called Abu Mesa Island.

As of 8:38 AM eastern US time, IRAN IS NOT PULLING BACK FORCES – THERE ARE NUMEROUS MAJOR IRANIAN MILITARY MOVEMENTS TO COMBAT POSITIONS

PROXY MILITIAS ARE BEING RAPIDLY ARMED AND MOVING

We are looking at prep from multiple militia groups and the Iranian military in a sequenced prep. This involves numerous groups including Hezbollah and the Houthi, along with Iranian assets in Iraq.

So as I reported a few days ago, this is a multi pronged attack (IF it happens), from Iraq, Yemen, the Gulf and other locations aimed at US interests and US forces directly.