Scott Morrison has described his surprise election victory as a miracle and hailed Australia as the greatest country in the world.

At the stroke of midnight, the Prime Minister delivered a rousing victory speech in Sydney just minutes after Bill Shorten conceded defeat and resigned as Labor leader.

‘I have always believed in miracles and I’m standing with the three biggest miracles in my life tonight and tonight we’ve been delivered another one,’ he said, standing next to his wife Jenny and their daughters Abbey and Lily.

‘How good is Australia and how good are Australians?’

The Pentecostal leader ended his upbeat 14-minute speech by praising the Almighty, after winning an election victory which the opinion polls and the betting markets had failed to predict.

Divine intervention of the political kind didn’t help former Liberal prime minister Tony Abbott, who lost to independent challenger Zali Steggall after suffering a 19 per cent swing against him – ending his 25-year political career as the member for Warringah on Sydney’s northern beaches. 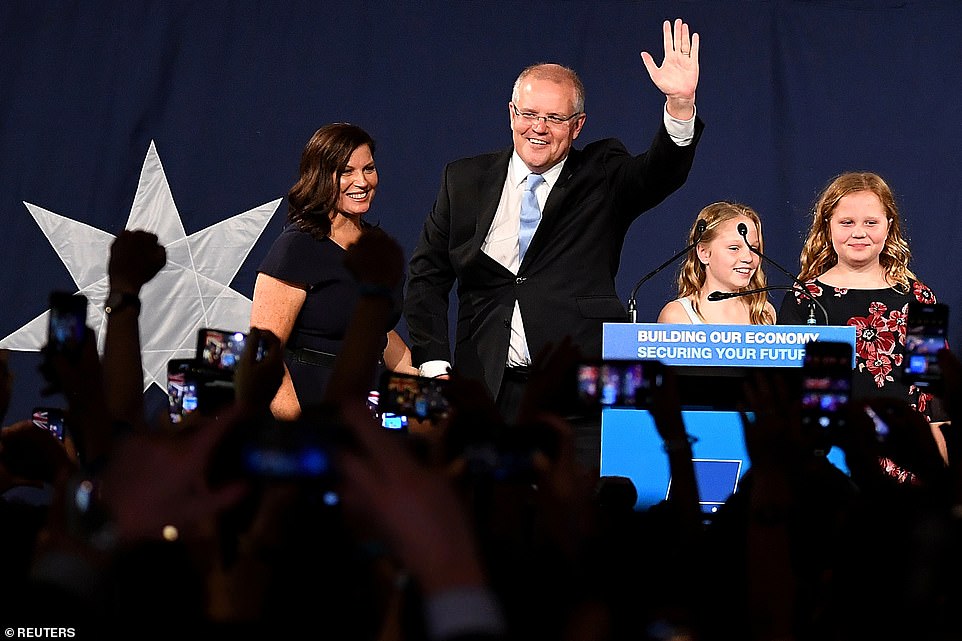 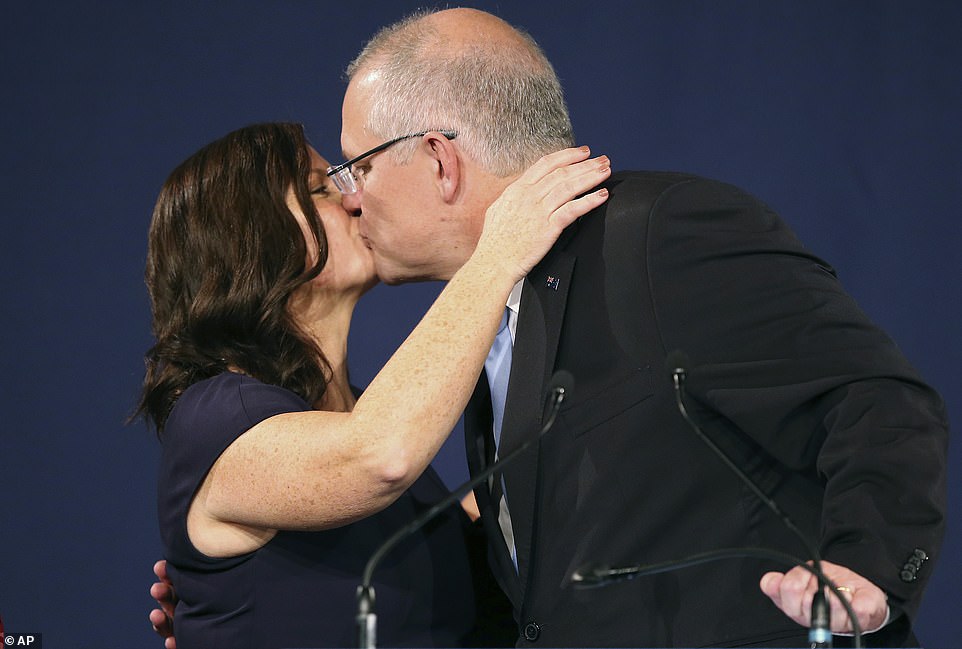 At the stroke of midnight, minutes after Bill Shorten conceded defeat and resigned as Labor leader, the Prime Minister spoke about his Christian faith during a rousing victory speech in Sydney (Scott Morrison is pictured with wife Jenny) 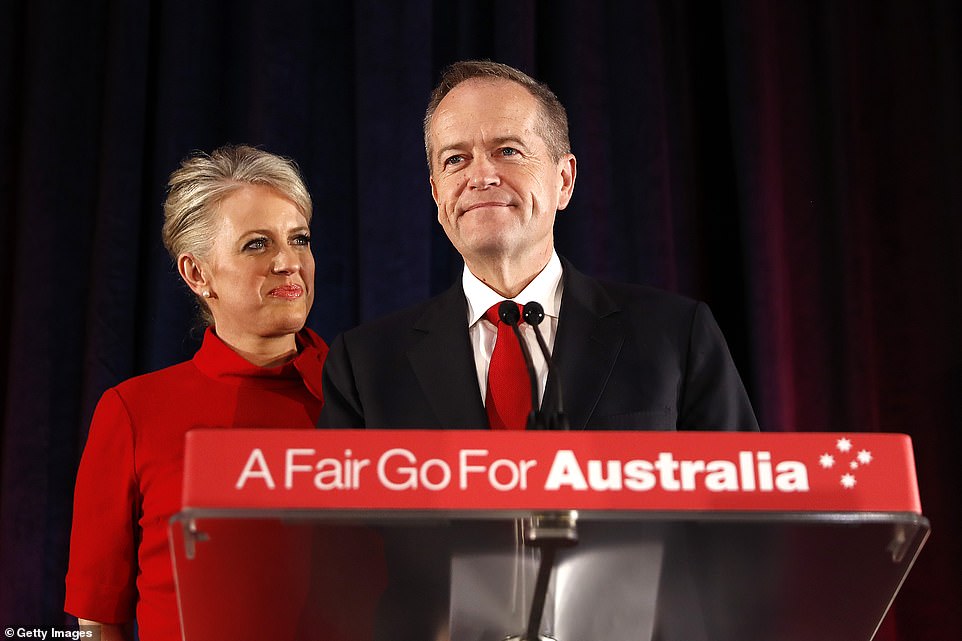 In a result which opinion polls and betting markets failed to predict, the Liberal and the National parties recorded strong swings to them – particularly in Queensland – granting them a possible slim majority or a minority with the support of pro-climate change action independents (pictured is Bill Shorten with wife Chloe)

Should the Coalition fail to secure 76 seats it may have to form a minority government with the support of Ms Steggall, a Winter Olympic medallist, and Helen Haines, who made history by succeeding retiring independent Cathy McGowan in the northern Victorian seat of Indi.

The Coalition has secured a third consecutive term in power for the first time since 2001, securing a surprise national swing of 1.5 per cent in its favour, leaving it two electorates short of a majority with 74 seats so far.

Labor has lost at least five seats in Brisbane, regional Queensland, Tasmania and western Sydney, leaving it with 66 seats in the expanded 151-member House of Representatives, after vowing to scrap negative gearing for existing properties and deprive some share-owning retirees of franking credits.

Mr Morrison, who replaced Malcolm Turnbull as Prime Minister in August, promised to work hard for all Australians.

‘I said that I was going to burn for you, and I am, every, single day,’ he said.

Mr Shorten conceded defeat shortly after 11.30pm and declared he would step down as Labor leader, after almost six years leading the Opposition and fighting an election based on a big-spending health and education agenda and tackling climate change.

‘I know that you’re all hurting and I am too,’ he told his supporters in Melbourne.

‘It’s obvious Labor will not be able to form the next government. This has been a tough campaign, toxic at times.

‘Whilst I intend to continue to serve as the member for Maribyrnong, I will not be a candidate in the next Labor leadership ballot.’

He has become the first Labor leader since Kim Beazley to have lost two consecutive elections and like him was also divorced and remarried. 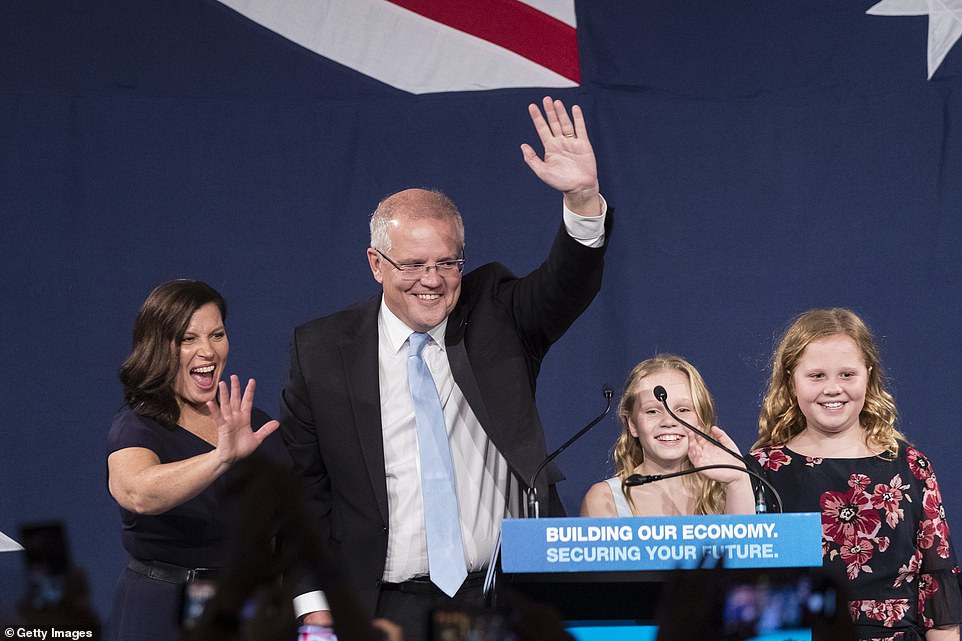 The Pentecostal leader ended his upbeat 14-minute speech by again praising the Almighty, after winning an election victory which the opinion polls and the betting markets had failed to predict. ‘God bless Australia,’ he told Liberal Party supporters at the Sofitel-Wentworth hotel

Mr Shorten called the Prime Minister to congratulate him on his election victory, adding he had sent his best wishes to his wife Jenny and their daughters.

Longman, in northern Brisbane, appears lost with sitting Labor member Susan Lamb suffering a 4.2 per cent swing against her.

Herbert, which Labor’s Cathy O’Toole won by just 37 votes in 2016, has been turfed out of this Townsville-based electorate in north Queensland with a swing against her of 6.7 per cent.

It has also lost Lindsay, in western Sydney, suffering a swing against it of 4.2 per cent. Labor disendorsed Emma Husar after her staff made bullying allegations.

Bass in northern Tasmania is also out of its grasp, with the Liberal securing a 6.7 per cent to it.

Braddon, in Tasmania’s west, has also thrown out Labor, which saw a 5.6 per cent swing against it.

‘In the national interest, a short while ago, I called Scott Morrison to congratulate him,’ he said.

‘Now that the contest is over, all of us have a responsibility to accept the result, respect the wishes of the Australian people to bring our nation together.’

‘I wish we could have done it for Bob but it was not to be,’ Mr Shorten said to applause.

Labor hasn’t won a third consecutive term federally since 1987, when Mr Hawke was leader, a feat which the Liberal Party’s John Howard achieved in 2001. Mr Morrison has joined their ranks in May 2019.

The Opposition struggled to pick up enough seats even in Melbourne, in Mr Shorten’s home state of Victoria, and has lost electorates the outer northern Brisbane seat of Longman, along with the Townsville-based seat of Herbert in north Queensland, Lindsay in western Sydney and the Tasmanian seats of Bass and Braddon. 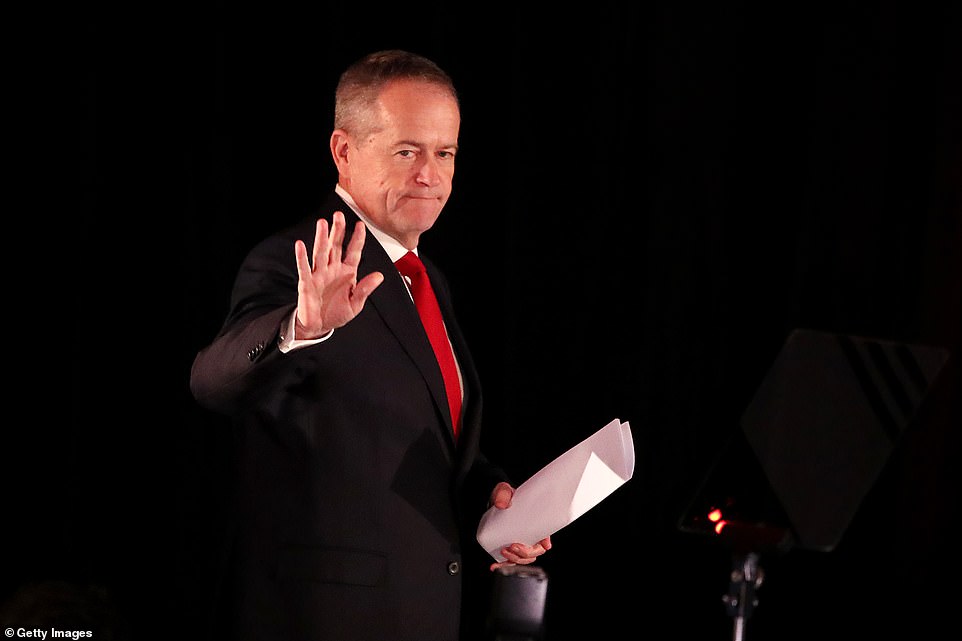 Home Affairs Minister Peter Dutton secured a swing to him in his northern Brisbane seat of Dickson, as Queenslanders swung political baseballs bats against Labor right across the state.

The Nationals had strong swings to them in north Queensland based on their support for the Adani coal mine, which could complicate a power-sharing arrangement.

The Labor’s qualified support for the Adani coal mine in Queensland’s Galilee Basin has boosted the Nationals in their most marginal seats, with swings of 12 per cent to it in Dawson and Capricornia, centred around Mackay and Rockhampton. 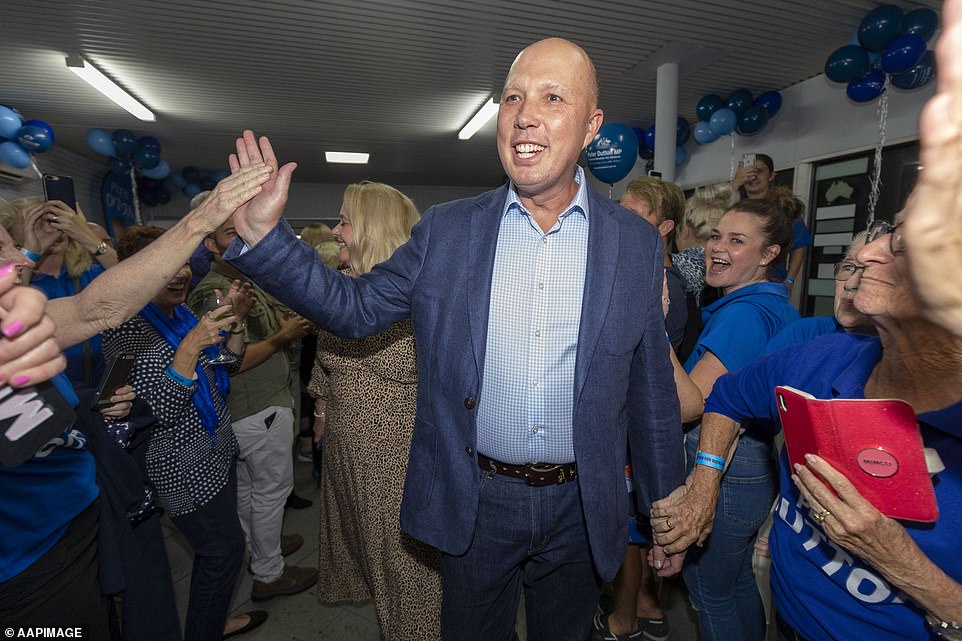 In a result which opinion polls and betting markets failed to predict, the Liberal and the National parties recorded strong swings to them – particularly in Queensland – granting them a possible slim majority or a minority with the support of independents (pictured is Home Affairs Minister Peter Dutton who had a swing to him in his Brisbane seat of Dickson)

[Interestingly just as in the United States with the 2016 Election], ABC election analyst Antony Green said the result was a ‘spectacular failure of opinion polls’ with the upset representing the first occasion since 2004 that a federal government has enjoyed a swing towards it.

‘We can’t say whether the Government will be in a majority or minority, but we’re certainly seeing enough numbers to say that the Coalition will end up with more seats than Labor.’

‘I did believe very strongly Bill Shorten had overplayed his hand on the class warfare,’ he said.

Ironically, the Coalition had not won a Newspoll since 2016 and Labor had won 55 consecutive Newspolls going into the election.

The final Newspoll of the campaign had showed Labor edging ahead of the coalition by 51.5 to 48.5 per cent on a two-party preferred basis.